Trending Now
You are at:Home»Featured»How to Become a Suicide Bomber (in 3 Easy Steps!)
By David Monahan on December 14, 2011 Featured, On Media 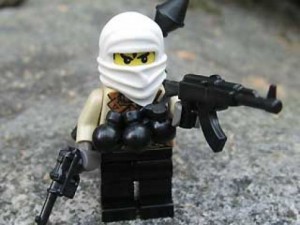 Shortly after 9/11 an acquaintance of mine pointed out that while their cause was obviously wrong, there was something to be admired about the single minded determination with which the attackers carried out their mission. Being a devout Catholic, he even doubted that God would be harsh when judging such sincerely committed souls. The idea fascinated me: what if I could find a way to wreak bloody death upon my enemies and gain, if not seventy-two virgins, at least eternal beatitude in the bosom of the Trinity? Thus began a decade of research the fruits of which I now present to all who have considered the hard but glorious path of the suicide bomber.

The first step in becoming a suicide bomber is to subscribe to an ideology. Don’t let that fancy word scare you; chances are, you already buy into several ideologies. What is an ideology? It is a theory which explains the events in the world around you. Now you are thinking: “Oh, like a scientific theory, right?” No, it is even better than a scientific theory! A scientist has to run around comparing his theory to nature, and if nature ever contradicts the theory, the theory is ruined. Ideology does away with this problem, because it is not scientific but scientifish, a vast improvement. Like the scientist, the ideologue examines the facts and comes up with a theory to explain them. Unlike the scientist he never has to worry about the facts invalidating his theory, because he follows this golden rule: whichever fact agrees with my ideology I emphasize, whichever disagrees with my ideology I ignore.

This sets up a positive cycle: among so many confusing facts, an ideology helps you choose which ones to pay attention to, and those facts in turn reinforce the ideology in an iron circle of logic. Soon you’ll find your head spinning with facts and arguments in support of your theory, almost faster than your conscious mind can keep up. Your ideology does all the thinking so you don’t have to!

But what happens when other people will not let you ignore inconvenient facts, but try to rub them in your face? That is precisely when ideology displays its strength! You see, ideology is so powerful that it can even turn facts inside out to mean exactly the opposite of what they normally would. All you have to do is apply this special rule: stubborn facts that go against my ideology are nothing more than elaborate lies. It sounds hard, but anyone can learn the trick.

Let me give you an example: a friend of mine – let’s call him Bill — believed as a matter of ideological principle that right wing politics were the source of all violence in this great country of ours. He celebrated the achievements of Timothy McVeigh, harped on the bombing of abortion clinics, and was among the first of my friends to blame Sarah Palin for the Tucson shootings. Yet one day I found him looking worried and depressed. “Dave,” he said to me, “I was arguing with a Tea Partier last night, and she pointed out that the left engages in just as much hateful rhetoric as the right, and listed a bunch of violent acts carried out by leftists, from the Weather Underground to the Kennedy Assassination. Could it be that I was wrong and that violence is rooted, not in one’s political views, but in some structural weakness of human nature itself?”

I knew I had to act fast in order to preserve Bill’s whole belief system, so I placed my hand on his shoulder and said, “Bill, the Kennedy Assassination carried out by a leftist? You mean that silly little Communist Lee Harvey Oswald? That’s just what the CIA wants you to believe!” You should have seen the look of relief on Bill’s face. I knew right then that I had saved him from reevaluating his world view by showing him that these apparent facts were just twisted lies. I am pleased to announce that to this day Bill advocates the suppression of the Second Amendment while simultaneously and without irony calling Checkpoint his favorite book.

The sign that you have achieved total submission to your ideology is when you can say with a straight face: “I am not an ideologue at all, but a total pragmatist. It is mere coincidence that the most pragmatic thing to do in every situation magically aligns with the platform of the radical wing of a certain political party.” It is no small achievement to loose the capacity to distinguish the ideal from the real! Thanks to your utter lack of intellectual humility, you are now worthy of the title “crank”, and are ready for the next step.

Haven’t you always envied those friends of yours who can preach on politics or religion for hours on end? Haven’t you wanted to be like them, able to hold court among your fawning admirers, but afraid that you would have to read books and have all kinds of original ideas in order to presume to pontificate endlessly about a subject? What if I were to tell you that you could be just like them, without an original thought in your head? Don’t believe me? Then let me ask you this: do you really believe that when Rush Limbaugh speaks for three hours a day, five days a week, fifty weeks a year, for twenty-five years, he is filling the airwaves with new and original ideas when even Albert Einstein only claimed to have one or two original ideas in his entire life? Of course not! All he is doing is applying the tricks we learned in step one: he sees a new event, interprets it according to his ideology, and lets his big mouth run! With a little practice, you too can blow as hard as anyone!

As you work on this skill, make sure to listen to pundits who reinforce your ideology. With time, you will find yourself imitating them without even noticing it. Pay careful attention to the phrases they often repeat, like “weather is not climate”, “it’s the economy, stupid”, or “better dead than red”.  These little axioms are powerful levers that help you avoid the heavy lifting of independent thought. You can string them together end to end and make a speech out of them, but don’t overlook the power of brevity either. Sometimes all it takes is one little word, like “Change!” to skip right over the whole problem of rational discourse.

If you are like me and writing is your thing, a great trick is to preface your comments on any leader you dislike with a litany of all his sins. Whether it is Barack Hussein Obama or Benedict XVI, don’t just complain about his latest misdeed; list all of his crimes, great and small, in chronological order. Besides filling up space in your column and giving it a sense of pondered seriousness it would otherwise lack, it primes the reader to share your wrath at yet another outrage. Don’t worry if you find yourself juxtaposing obvious errors with debatable ones, or criminal charges with social slip-ups, you are creating a cumulative effect in which the whole is greater than the parts.

The good news is that once you have honed the skill of expounding an ideology you can use it for more than just making unpleasant relatives avoid you at family reunions; you can turn it into a career as a radio talk-show host, imam, online blogger, or college professor of Race and Social Justice.

We are ready to pass to the third and final principle of the suicide bomber. When you were an adolescent you believed that anyone who disagreed with your politics was either stupid or evil. The thought that an intelligent, well-meaning person might disagree with you seemed impossible. By now you know better: your ideology is so self-evidently true that even a child, indeed, even the dullest of children, can grasp its perfect rationality. With stupidity excluded as an option, that leaves only one possible reason why others reject your ideas: pure malice.

The ideology you have embraced holds within it the key to a rejuvenated America and a perfect world. A new Eden, in the form of the Dictatorship of the Proletariat, a Just Society, or Universal Submission to Islam, is just around the corner. So what could be holding it back? What reactionary forces are keeping the revolution at bay? The answer is simple: THEM. Who are they? That’s up to you! Masons, Communists, the Tea Party, the Liberal Media, the 1%, Big Oil, or of course the Jews (pronounced Jooooos, only to be spoken in a whisper), are all excellent candidates: easily defined in the abstract, yet mysterious and foreign enough to let you attribute all sorts of shenanigans to them. They are the arrogant ones, and you the lowly victim. They are what is screwing up America; you are what is going to set it right.

Once you have identified them, just imagine how pleasant life would be if they were to simply disappear. Even better, imagine if they could disappear in a ghastly explosion, justly proportionate to their crimes! After all, they are in cahoots against all that is good, true, and environmentally responsible. What are their lives, or yours for that matter, worth in comparison to the earthly paradise their elimination will achieve?

Well, there you have it. Perhaps not all of us are called to the heroic virtue of strapping on a dynamite vest and bringing the minions of evil to justice. I, for one, have resigned myself to the thankless but necessary task of inspiring others to become suicide bombers. (No seventy-two virgins in Paradise for me, I must be content with half that many.) What we should all do is participate in our own small way in the struggle: every insult hurled at our opponents, every time we click “send” on an angry e-mail, every choice of a pet idea over the living breathing person next to us we are building the glorious future, and preparing our own eternal reward.