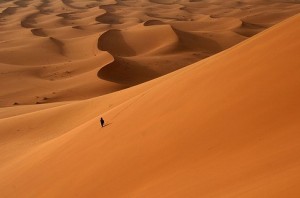 When one speaks of temptation, it tends to carry a negative connotation because it is often attributed to something we shouldn’t do. However, I would propose that the art of temptation reveals a certain beauty in that a person is faced with a decision to either act out the temptation or not. Whether the decision takes a split-second or is carefully drawn out, a dilemma ensues as to whether the person should or shouldn’t. What we have here is a battle between an attraction that is contrary to right reason and judgment against God’s commandments.

Let’s keep in mind that our first parents faced this situation in a somewhat drawn out process orchestrated by the devil himself. Temptation abounding, the serpent proposed the forbidden tree and its fruit was more tantalizing than all of the others combined. What the serpent offered to our first parents was to think outside of themselves and disregard right reason i.e. God (Gen 3:1-7).

St. Paul sheds light on this interior conflict and battle with temptation and right reason when he shares his own struggles with doing the very things he should avoid but stills does them anyway;

Did that which is good then bring death to me? By no means! It was sin, working death in me through what is good, in order that sin might be shown to be sin, and through the commandment might become sinful beyond measure. We know that the law is spiritual; but I am carnal, sold under sin. I do not understand my own actions. For I do not do what I want, but I do the very thing I hate. . . (Rom 7:13-15)

When faced with temptation to do something we know we shouldn’t, we do it anyway. Our immediate rationalization is the satisfaction our human appetite regardless of how we feel afterwards. Pascal reflects this idea further in his Penses:

“Being unable to cure death, wretchedness and ignorance, men have decided, in order to be happy, not to think such things”

In a split second we blind ourselves from reality through a perversion of the senses. The problem many of us face is our continual need to live in a blind state of mind.

The Nature of Temptation

The nature of temptation rests in man’s desire to seek an alternative to God’s love. This proposition can only appear to last so long, eventually the alternatives to God’s love do not adequately fulfill the appetite of temptation. We recall that the original disobedience exercised by Lucifer against our Father in Heaven revealed the decisive choice of self-love over a devout love to God. Lucifer and his legion specifically chose their own perverted ideal of love versus God’s love. Their seductive voices resonate a desire to disobey out of envy (Gen 3:1-5; Wis 2:24).

The First Order of Temptation

Temptation is an attraction from outside oneself or from within, to act contrary to right reason and the commandments of God. The Catechism reminds us: “Tempting God consists in putting his goodness and almighty power to the test by word and deed.  [See: Lk 4:9; Deut 6:16] The challenge contained in such temptations toward God wounds the respect and trust we owe our Creator and Lord. It always harbors doubt about his love, his providence, and his power” (CCC 2119).

Keep in mind; we have indulged ourselves to become a self-centered society. Our understanding of the world at times shuns the truth, beauty, and, goodness of who God and the created order of things. In other words, I am no longer a child of God but a child of myself. When we convince ourselves that our own self-fulfillment is more important than our relationship with Jesus Christ our appetite for self-fulfillment will never end and thus never be satisfied. Only in Christ can man fill the void in him.

Enduring the Trial of Temptation

Sacred Scripture tells us that Jesus was tempted three times (Lk 4:1-13) while in the desert for forty days and nights.

An important point to remember as Jesus began his journey into the desert was that he was filled with the power of the Holy Spirit. This reflects Jesus’ awareness of the evil forces around him aimed to thwart His mission. We would do well to follow Christ’s example of preparedness through faithful prayer, adherence to the law (Ten Commandments), and faithfully living a sacramental life. A good starting point is immersing ourselves in God’s mercy by making an examination of conscience, shunning those elements of our lifestyle that leads us into temptation and making a concerted effort to receive the sacrament of penance. There is no reason why we should lose all inhibitions over a tempting situation fostering a negative result. St. James provides sound advice on “enduring trials”:

“Blessed is the man who endures trial, for when he has stood the test he will receive the crown of life which God has promised to those who love him. Let no one say when he is tempted. ‘I am tempted by God”; for God cannot be tempted with evil and he himself tempts no one; but each person is tempted when he is lured and enticed by his own desire.” (1:12-14)

“. . . and lead us not into temptation but deliver is from evil.”

The second to last petition of the Our Father reflects our desire to not concede to temptation due to our transgression i.e. our trespasses. What this means is a genuine desire of the human heart to combat evil and not fall prey to the emptiness of false gods. There is a two-fold approach to this petition. One: not to yield to temptation; Two: not to be allowed to enter into temptation (See: Mt 26:41). We must remember, God does not tempt anyone and he cannot be tempted by the Devil (CCC 2846).

As a final point, St. Paul provides comforting words on the issue of temptation and how we can understand the power of God’s love regardless of the trials we face;

“No temptation has overtaken you that is not common to man. God is faithful, and he will not let you be tempted beyond your strength, but with the temptation will also provide the way of escape, that you may be able to endure it” (1 Cor 10:13).