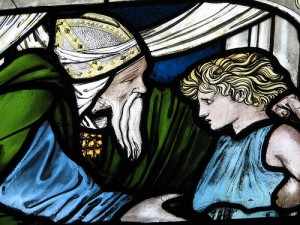 God speaks to us constantly through ordinary events and signs, but we aren’t always listening. We need to open our ears to hear his supernatural suggestions. As Jesus said, “let him who has ears to hear, hear.” How do we fulfill this desire of Jesus?

1. Place ourselves in God’s presence. Don’t be too busy to pay attention to God.  Take a few minutes to pray every day. Go to daily Mass if you can. Bask in an hour or more of Eucharistic Adoration. Best of all, take a day or weekend away for a silent retreat. God speaks to us in the silence. Particularly if we don’t pray or go to Mass every day, a retreat can be a great way to reboot our spiritual life. Are you happy with your life right now? Is God happy with your life right now? A retreat can be a great way to discover answers to problems that you’ve been putting on hold for too long. And that’s exactly what happened on my last retreat.

2.  Be alert to the unusual. I went on retreat a few weeks ago with the intention of listening to God but also figuring that I could finish writing the book proposal that was due to be submitted to the publisher a week later. God’s response was to hit me with the worst case of writer’s block ever. Having worked for 10 years as a lawyer who read and wrote for a living, I could never have afforded to get writer’s block and I pretty much never did. Getting writer’s block in the middle of a retreat was equivalent to God launching rocket flares. He was trying to tell me something. But what was it?

3. Don’t be stubborn. Knowing that God was probably urgently trying to talk to me, I still ignored him. For an entire day of that weekend retreat, I struggled to eke out sentences at a snail’s pace. None of them was worth the paper they were written on. Knowing the deadline was looming, I told myself I had no choice. Then I remembered that my life belonged to God, my intelligence belonged to God, and my book belonged to God as well. He could take it all away in an instant if he thought it jeopardized my eternal salvation. My stubbornness was about as foolish as a toddler’s refusal to go to bed. Whatever God wanted would happen eventually, regardless of how much I fought it.

4. Give God what he wants. Despite my rising panic over the deadline, I promised God an entire day just for him. I cried, I prayed, I sought spiritual direction, I went to confession, and then cried some more. Without my work as a crutch and as an escape, I was forced to confront certain experiences in my life that were deeply troubling me. Chronic fear had invaded my mental landscape and it was choking my ability to love God, my husband, and my children. God didn’t care about my book at that instant. He cared about the fact that my spiritual life was a mess and I wasn’t willing to admit it. He wanted me to abandon myself to him in a radical act of trust. Only by giving God what he wanted would I be able to move forward in hope. Giving God what he wants will always result in doing what’s ultimately best for us as well.

So let’s try to listen to God’s voice and hear with our supernatural ears. Tuning him out will only prolong our unhappiness and our struggles.