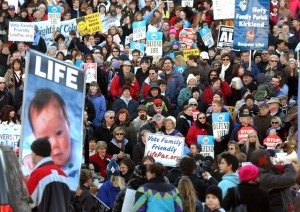 Consider for a moment the sheer gravity of this truth: that a society is fully capable of being blinded to the clear and absolute evil of an ideology, practice, or undertaking. Just think about it, regardless of your views; there is simply no denying society’s capacity for the normalization of that which even the most reduced and open of moral perspectives could find to be abhorrent. In the absence of an absolute moral code, pragmatism and rationalism step in to establish acceptable social norms. Society justifies the moral structure through what is perceived as being necessary to the maintenance of the status quo.

One needs to look no further than our own country’s history. For slave owners, slavery was critical to the maintenance of their plantations and farms. For many individuals, particularly in the South, the American way of life was seen as being contingent upon slavery remaining a socially acceptable practice. As such, the sin of slavery was neutralized as an associated cost to the benefits of free labor, and the practice itself became normalized. It was considered by many to be a ‘necessary evil’.

Have we already forgotten this? Have we forgotten the fight which we had to endure in order to see the horrors of slavery ended in this country? Have we forgotten how, in the century after slavery was illegalized, we still had to continue fight against the evils of racism and racial segregation? Do we not remember how it was a ‘common thing’? How it was widely accepted? Have we forgotten how denying another human being the freedom to live their own life was once ‘acceptable’ and ‘popular’?

So where are we now? In wiping out the stain of slavery from our culture, have we achieved some sort of societal nirvana where we now are incapable of blinding ourselves against such evil?  I do not think so, in fact, I know we have not.

42 years have passed since Roe v. Wade marked the beginning of the new ‘slavery’ of our times. Once again, in the absence of publicly accepted absolutes, society has allowed pragmatism and rationalism to step in to define our morals. Individuals see abortion as crucial to maintaining their way of life. In our, pragmatic, materialist society, children have become a commodity with a price tag attached. Children are expensive and costly. They require money, time, energy, and commitment. If you can afford one or two, that’s cool; but if not, know that you risk losing your comfortable lifestyle by not exercising your freedom to choose. Abortion is okay, everyone else is doing it. It is socially acceptable and a legal practice after all, so it must be okay. You just do whatever you have to do to make sure that you live the life that you want.

For me, ignoring the fact that slavery was once justified in this country in the very same manner is just not possible.

So how will history remember this time in our country? We look back now, only about half a century, and we can see the influence of evils like segregation and racial prejudice on our country’s collective identity. We can even feel a sense of shame and sorrow for the way in which our ancestors acted. Will our descendants feel a sense of shame about how we have decided to allow abortion to become an acceptable practice?

I would like to ask one final question, what do you think of those individuals in our nation’s past which supported slavery, were racially prejudiced, or were pro-segregation? You will never meet these men and women; most of them are long dead, so their legacy is all that remains. With the exception of their support of these evils, many of these individuals would have led very normal lives. They would have families and friends they loved. They had jobs they cared about and communities they worked to build up. They were, in a sense, a lot like you and I. Yet, these men and women who supported slavery and racial prejudice are not remembered for the way they loved their friends, family, or communities. No. They are remembered for supporting a practice which will always be considered evil. To them, racism was normal, popular, and acceptable. To us, we see racism for what it really is, and therefore see them in a less than favorable light.

So perhaps you believe that abortion is normal and acceptable. You believe that, as it is legal, it is your choice and your legal right to exercise it as such. I am here and I do not judge you as a person, despite the fact that I disagree with your views. I still see the way you love your family, your friends, and your community. I can see beyond your views and see the person that you are, created in the image and likeness of God, like myself. Be advised though, that when this country wakes up to realize that it has blinded itself once again to evil, history will be a much harsher judge of your view. How do you want to be remembered? I know I want to be remembered as an individual who stood up for what is right, and did not give in to what everyone else though was okay and acceptable. The abolitionist movement was not popular in its time, but think how those men and women are remembered as heroes today! I want to be a hero, do you?