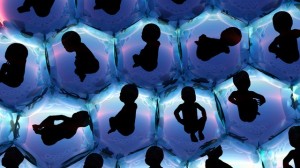 Once induced pluripotent stem cells hit the scene, human cloning slowly faded away. Why clone embryos with human eggs (exploiting women in the process) to get “patient-specific” embryonic stem cells when you can just take an adult cell and reprogram it back to an embryonic-like state? No eggs, no cloning, no creating and destroying embryos.But I knew cloning was just hiding in the shadows waiting to resurface. Scientists are still trying to achieve this “holy grail” of human biology: the creation of human clones. Ones that will generate embryonic stem cells.

A team of scientists, including a fertility specialist (meaning IVF doc) from Japan, has done it. Not in some underground lab in China, but in the good old USA. Oregon to be exact.  Nature has the story:

A paper published this week by Shoukhrat Mitalipov, a reproductive biology specialist at the Oregon Health and Science University in Beaverton, and his colleagues is sure to rekindle that debate. Mitalipov and his team have finally created patient-specific ESCs through cloning, and they are keen to prove that the technology is worth pursuing….

Mitalipov and his group began work on their new study last September, using eggs from young donors recruited through a university advertising campaign. In December, after some false starts, cells from four cloned embryos that Mitalipov had engineered began to grow. “It looks like colonies, it looks like colonies,” he kept thinking. Masahito Tachibana, a fertility specialist from Sendai, Japan, who is finishing a 5-year stint in Mitalipov’s laboratory, nervously sectioned the 1-millimetre-wide clumps of cells and transferred them to new culture plates, where they continued to grow — evidence of success. Mitalipov cancelled his holiday plans. “I was happy to spend Christmas culturing cells,” he says. “My family understood.”

Let us be clear where Nature is not. These researchers did not create “cells” they created embryos which where then destroyed for embryonic stem cells.

Speaking of young women, did you noticed where the supply of eggs needed for these experiments came from? Young, cash-strapped, college students enticed by the $3,000-7,000 compensation. I wonder how many of these young women experienced complications from their “donation.” I wonder of any will lose their own fertility as some egg donors have.

I wonder also why, with iPSC technology, anyone is even pursuing SCNT anymore. I am not alone:

Still, Daley and most other stem-cell researchers have shifted to another method for creating genetically matched, patient-specific cell lines: reprogramming adult cells to an embryonic state to produce induced pluripotent stem (iPS) cells. First reported in 2006, the technique does not involve eggs, cloning or destruction of embryos. “Honestly, the most surprising thing [about this paper]is that somebody is still doing human [SCNT] in the era of iPS cells,” says Miodrag Stojkovic, who studies iPS cells for regenerative medicine and runs a fertility clinic in Leskovac, Serbia.

Actually, I don’t wonder. I have always thought that stem cells were a red herring. I see the end game to be reproductive cloning, or cloning-to-produce children.