Trending Now
You are at:Home»Columnists»I Get Knocked Down, But I Get Up Again
By Jake Frost on November 5, 2014 Columnists, Featured, Live in Christ, Men, MyChurchParish.com, Parenting 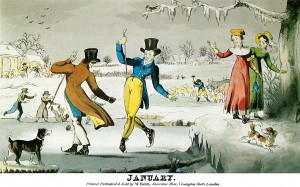 Life is more about getting up than it is about not falling. So my father commented once, long ago, when (of all things) we were watching figure skating.

It wasn’t just any figure skating, though, it was the return of Scott Hamilton after his battle with cancer. For those too young to remember, Scott Hamilton was an amazing figure skater who leaped to fame (literally) by perfecting a back flip on ice. He’d streak across the rink skating backwards at full speed and then suddenly—Pop!—amid a flash of ice digging toe-picks he was defying gravity, flying through the air backwards and flipping head over heels.

The first time I saw it, it was literally jaw-dropping. I jumped off the couch pointing at the TV exclaiming: “Did you see that!”

It’s too bad his long and amazing career was reduced to just that one spectacular stunt (at least for me). He was an adopted child, endured medical problems in his youth, almost had to quit figure skating when he ran out of money to continue training, but persevered through the difficulties and uncertainties to eventually become a champion—with an Olympic gold medal, four US Championships, and four World Championships among his many accomplishments.

As amazing as all those victories were, the icy acrobatics of the high-flying back flip was just so stunning that it overshadowed everything else.

But then, at the height of his fame, Hamilton got cancer. His battle against the disease left him so week he couldn’t skate anymore. He dropped off the professional circuit. Had he hung up his skates for good? For a long time, it was an open question. But, eventually, he beat the cancer.

Then he began working to regain his strength and, perhaps, return to the ice. Then came a nationally televised professional figure skating competition, and Hamilton got a spot in the program to make his return. Our family tuned in (along with much of the rest of the country, I suspect), to see how he was, and, above all, if he could still do that amazing back flip.

When it was his turn, Hamilton came out smiling, and ran through a strong program—but no back flip. Until, at the very end of his performance, with everyone wondering if he could still do it, Hamilton began circling the rink, skating backwards, going faster and faster. The song playing as he made his way around the arena, gathering speed, was a hit current at the time: “Tubthumping” by Chumbawamba.

The refrain of the song repeats over and over again: “I get knocked down, but I get up again! You’re never gonna keep me down!” With those words blaring over the ice Hamilton raced backwards, and with the whole country sitting on the edge of their seats . . . Bam! Toe picks dug in, ice chips flew, and Hamilton launched into the air in a soaring back flip! He did it! My brothers and sisters and I jumped up, pumping our fists in the air and cheering in celebration of his triumph.

It was really cool.

That was when my Dad (who is not a huge fan of modern music—then or now), commented: “That song, those lyrics are good psychology. You can count on getting knocked down in life. And you can’t let fear paralyze you. Everyone’s going to take their lumps. The important thing is getting up again. That’s a good life skill to learn.”

Before that, the Chumbawamba song had never particularly registered with me, but after Dad’s comment, I went out and bought the CD, and always think of that moment and Scott Hamilton’s backflip when I hear it’s chanting: “I get knocked down, but I get up again! You’re never gonna keep me down!”

St. Francis de Sales said: “Raise up your heart after a fall, sweetly and gently, humbling yourself before God in the knowledge of your misery, and do not be astonished at your weakness, since it is not surprising that weakness should be weak, infirmity infirm, and frailty frail.”

But we can get up again. As Saint Basil the Great said: “There is still time for endurance, time for patience, time for healing, time for change. Have you slipped? Rise up. Have you sinned? Cease. Do not stand among sinners, but leap aside. For when you turn away and weep, then you will be saved.”

We have today (though we may not have tomorrow, as St. Augustine reminds us: “God has promised forgiveness to your repentance, but He has not promised tomorrow to your procrastination.”). We have now. We can change. Start over. Try again.

A great quote I found from Oliver Goldsmith captures it: “Success consists of getting up just one more time than you fall.”

Success, real success, the only success that matters and the only true success, is making it to heaven—becoming a saint. And Blessed Mother Teresa of Calcutta told us: “Saints are only sinner who keep trying.”

So take heart, list to Mother, and get back up again to give it another go! Don’t let anything ever keep you down!