Trending Now
You are at:Home»Featured»If Aristotle’s Kid Had an iPod
By Patti Maguire Armstrong on December 19, 2012 Featured, On Books, Parenting 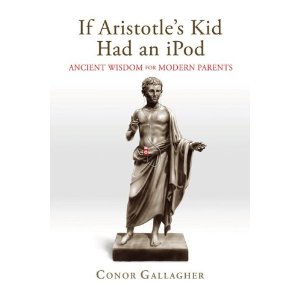 What is the difference between a child born in the Twenty-first century and one born in 300 BC?  Nothing, since human nature is unchanging, but everything, if modern child-rearing techniques are applied.

Human nature never changes, be it during ancient times or in the modern world. Thus, Aristotle’s philosophy was as brilliant in 350 BC as it is today.  And, according to Conor Gallagher, author of If Aristotle’s Kid Had an iPod: Ancient Wisdom for Modern Parents, Aristotle has a lot to teach today’s parents.  Such wise insights as, “You must desire the virtuous life to fully obtain it,”  and, “Excellence is an art won by training and habituation. . . . it is not an act but a habit” are as applicable today as they were 2,400 years ago.

While getting a master’s degree in philosophy, Gallagher spent many late nights studying at Starbucks in the Barnes and Noble bookstore under the apartment he shared with this wife and three kids. “I’d wander over to the parenting and philosophy sections and realized that all the parenting books had completely neglected ancient wisdom,” he said during an interview.  “I noticed that Aristotle’s concepts—of moderation, habit formation, friendship, pleasure versus happiness, and so on—was very helpful in raising my three little kids and superior to most of what is out there today.”

It was a thought Gallagher filed away but often, he would notice parents doing the exact opposite of what he thought should be done. At such times he would think, “They need a good dose of Aristotle.””

After earning a law degree and a masters in philosophy Gallagher taught college level classes,  became vice president of St. Benedict Press and Tan books, and is the executive producer of Catholic Courses.  He also added five more children, making eight of them  ages ten and under.    Gallagher continued to apply ancient wisdom in his own home with positive results. He believed that other parents could benefit from this philosophy if they had the opportunity to understand it.

If Aristotle’s Kid had an iPod, translates concepts from Aristotle’s most famous work, Nicomachean Ethics(the same name as both his father and son) into a language everyone can understand. Born in 384 BC in Greece, Aristotle’s many works are all considered masterpieces. Perhaps the most influential thing Aristotle did during his lifetime,  was to tutor Alexander the Great until the age of sixteen, at which time Alexander began to conquer the known world.  The greatest emperor had the greatest teacher.

Gallagher said it is unfortunate that many parents succumb to their children’s demands (as if they are Alexander the Great). “Kids deserve more than just love,” he said. “You need to understand human nature and play by its rules.”

Although Gallagher loved philosophy, he understood that many people were put off by it, imagining it was beyond their understanding. “But philosophy is for normal people,” he said. “The problem with philosophy is philosophers. It’s hard to read because of the method in communication, but it is not hard to understand.” He compared it to reading Dr. Seuss in German. He would not be able to read it, yet it’s simple to understand the stories.

The feedback he’s been getting from readers has been overwhelming positive.  “I am thrilled that people are getting it,” he said. “Philosophy is not hard to understand, when it’s translated into a language we can understand.”

In order to become virtuous and happy, Aristotle taught that our children must perfect their human nature in a particular way. And that is what Gallagher captures.

“We perceive virtue as a “duty” that must be done, no matter how bad it hurts,” he said.  “We absolutely have duties toward our God, family, work, and community but many parents have forgotten this.” Gallagher explained that Aristotle sees duty as a stepping-stone to something much greater. “When your kid learns to read, she frustratingly does so out of duty. But as time goes on, it becomes easier and enjoyable. What was once a duty becomes enjoyable. And so it is with virtue.”

He explained, “It is a parent’s responsibility to teach their children the purpose of their actions and constantly to remind them that the true destination is happiness with God.” According to Gallagher, such modern social sites as Facebook, and contraptions such as iPads, Xboxes and iPods, have aspects that contradicts Aristotle’s philosophy for instilling good virtues.

“Quiet contemplation and time alone to think are by no means bad things, and Aristotle would support them, but jamming out to the iPod all day doesn’t quite constitute deep thought.” Gallagher does not say Aristotle would never have them in his house, but rather he emphasizes the importance of not interfering with the healthy nurturing of human nature. “Suffice it to say, the average kid spends more time with his gadgets and TV than he does with other people. And that’s not good.”

Thus, Gallagher warns against scientific advancements that distract us from the world rather than engaging us in it.  Many parents might balk at such an indictment, but the reasoning is explained in an orderly development of logic so that parents, like the kids, are being nurtured along by Aristotle.

If Aristotle’s Kid Had an iPod, is simply logic and truth at its best, presented in a usable way.  “I’m a mediocre philosopher who is fed up with hearing stupid parenting advice and watching parents get pulverized by their kids,” he said. Instead, Gallagher hopes that parents will internalize Aristotle’s comparison with acorns being like the nature of children. “It has the potential to develop into an oak tree, but needs water, sunshine, and fertile soil.”