Trending Now
You are at:Home»Featured»“If Nigeria Falls to Islamic Extremists, All of Africa Will Be at Risk”
By ACN-USA News on January 7, 2014 Featured, Those in Need 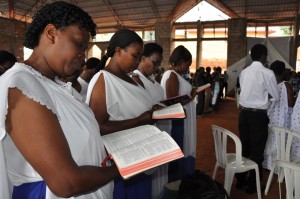 According to a local Catholic leader, Nigeria’s well-being holds the key to the fate of the African continent: “If Nigeria falls to Islamic extremists, all of Africa will be at risk.”

Bishop Hyacinth Egbebo is the administrator of the Apostolic Vicariate of Bomadi, in Nigeria’s Niger Delta, in the heart of the country’s oil-rich but economically deprived south. Nigerian Christians are confronted with the growing threat of radical Islam in the form of the extremely violent anti-Christian Boko Haram sect, which was declared a terrorist organization by the US.

With 160 million people, Nigeria is Africa’s most populous country. Just over 50 percent of the people are Christians, who form the majority in southern Nigeria; Muslims account for another 45 percent of the population, largely living in northern Nigeria. There are 30 million Catholics in the country. In 2012, close to 1,000 Christians died because of their faith in Nigeria, according to reports, and Boko Haram is responsible for the deaths of at least 700 Christians in 2013.

Bishop Egbebo spoke with Catholic charity Aid to the Church in Need Jan. 1, 2014.

Fulani tribesman in conjunction with Boko Haram militants massacred 70 Christians late last year in northern Nigeria and there are reports practically every week of new attacks. The group is said to charge the government with not responding to Christian attacks on Muslims. Is there any validity to that claim?

Revenge killings did take place in Jos, two years ago, and in Kaduna last winter, both of which are Christian strongholds. But the bishops strongly condemned the murder of Muslims at the hand of Christians, and such revenge attacks are very few now.

Archbishop Ignatius Kaigama of Jos, president of the Nigerian bishops’ conference, has also called attention to what he calls Islamic propaganda, exaggerations of the number of Muslims killed, and he also pointed to instances where Muslims included the bodies of Christian victims among their own dead. The bishops have prevailed however, in the face of Boko Haram’s effort to provoke Christians into acts of retaliation and create chaos in the country. Of course, some Christians fight back if they are attacked.

What is the appeal of radical Islam? Why this hatred of Christians?

Boko Haram wants an Islamic state in the North, imposing Sharia law on everyone. Hence, everything that is an obstacle to implementing that goal becomes a target for violence. Those obstacles include the government itself, the constitution, as well as the police and the army.

Christians, moreover, are associated with the West, with the values of freedom and democracy and the promotion of education. That’s why Boko Haram is even attacking schools and killing children. These radicals believe that Western education should be forbidden, anything that builds up the Christian ethos.

Then, should they succeed in the North, they would set their sights on the South. If they should overrun Nigeria, it will be a steppingstone to conquering smaller countries. There is a lot of support for Boko Haram from outside the country; otherwise the fact that they are so professionally trained and supplied cannot be explained. If they had simply been a homegrown organization, they would have been defeated by now.

What outside forces could be behind it?

I am not sure. There was speculation that Muamar Gadaffi played a major role. He is the only figure we have been able to identify, thus far. The former president of Nigeria, General Muhammadu Buhari, at one point made a not so veiled threat that should he not be re-elected, he would make the country ungovernable. Now a man from the South, a Christian leader, Goodluck Jonathan, has been elected president of Nigeria and attacks by Islamic radicals have definitely increased. Since the killing of the electoral officers on the day the results were announced, the momentum of Boko Haram attacks has picked up sharply.

Are there enough moderate Muslims in Nigeria who could serve as a counterweight to the radicals?
Yes, prominent Muslim leaders have spoken out against Boko Haram, provoking assassination attempts. Some have already perished. There are also Muslims who are guarding Christian churches during services. By no means are all Nigerian Muslims on board with this radicalization. Particularly in the south, there are very moderate Muslims, who accept Christians within their own families.

Unfortunately, some political leaders are supportive of Boko Haram, which the government itself has acknowledged. In the wake of the presidential election of a Christian from the south, there is palpable fear in Nigeria about political power shifting to the south, threatening the privileges of Muslim elites in the North, some of whom ascended to positions of power without being qualified whatsoever—simply because they were Muslim. Take, for example, the oil industry, whose rich bounty was until recently given to people in the North.

Yet, the oil comes from the South.

Yes, but just come and see for yourself: we have no electricity, and there are so many potholes in our road that driving is a real hazard; plus, for the vast majority of the people here there aren’t any roads at all. The wealth produced by our natural resources literally and figuratively flows north. The oil is piped northward for more than 700 miles to be refined.

Within the Apostolic Vicariate of Bomadi there are no reliable schools or hospitals; there is no drinking water. Change will come very slowly. Real reform will require very courageous and charismatic leadership.

There are also reports of Christians becoming Muslims for the sake of economic advancement. Is that true?

That was certainly the case under the military regimes, when presidents came from the north and the oil wealth was mainly controlled by them in a very, say personal way. You could become a Muslim, marry a Muslim girl, and partake in the oil wealth. Those converts, once their fortune changes again, are likely to return to the Christian faith, but doing so in the north could cost you your life. They have to relocate to the south if they really want to revert to their former Christian faith. The constitution allows for such conversions, but the law is ignored in the north.

You also have to cope with aggressive proselytizing from fundamentalist Christians.

They accuse us of worshipping the Virgin Mary; they claim lots of miracles. They often preach a Gospel of wealth: ‘if you are not rich, God has not really blessed you,’ they charge. Pastors flaunt their personal wealth, and that holds appeal for people, including Catholics, who long for material possessions.
What is the greatest gift of the Church for Nigeria?

Christians have a great contribution to make by speaking truth and emphasizing the need for peace. The Nigerian bishops regularly call on the government and urge reform. Boko Haram would fade out if people had the prospects of a decent life. There is a lot of lawlessness, rampant crime. The Catholic Church also seeks to provide quality healthcare and education, as best we can. This is why quite a few Muslims in high places send their children to our schools.

You have spoken about corruption as a particular plague for Nigerians.

If our government leaders had not been corrupt, Nigerians would have had a reason to live very different lives. Corruption is one of our worst evils. There is no hope to make a decent living, so many are easily drawn into a life of violence. Young people, in particular, offered very little money, are hired to fight to protect the political interest of some of those in government during elections; many young people have died as a result. That is why Nigerian bishops and priests preach against corruption at almost every Mass. We have composed a prayer against corruption which is said every day by Catholics.

What’s more, young people who have responsibility of protecting the oil pipelines, are often suspected of the theft of crude oil; in some cases, they deliberately cause leakages because the government fails to pay their salaries; pipes also burst due to delays in repairing or replacing them. The spillage pollutes the water that people rely on for drinking water and hygiene.

Are you disappointed in the lack of action on the part of Western governments, even Church leaders?

The Western nations could have done more. But oil is the problem, I suppose. They are benefitting from it and they do not want to challenge those that are in power. Chevron; Shell; Ajip; all those companies are exploiting our oil and not doing enough to confront the fundamental injustice of the situation. International practice or standards are usually not maintained by these oil companies.

Let me also acknowledge that the leaders of Nigeria and local communities have not helped matters as they are more interested in seeking their personal benefits rather than the general good of the community.

What is your message to the West?

Don’t sit by while Nigeria disintegrates! Make sure Boko Haram is defeated. If Islam overruns Nigeria, the rest of Africa might easily fall prey to them. That would be an unimaginable humanitarian disaster.
Also, please keep in mind that we have more pressing problems here than what is bothering the West, and which you tend to dump on us, like same-sex marriage or abortion. We have been told that in order to access Western aid, we have to accept the modern way of doing things. We don’t want any of that. But we are dying of lack of food, for lack of very basic things.

Don’t try to impose your way of life on Africa. The West is far too interested in what it can get out of Africa, like our oil or diamonds in the Democratic Republic of Congo, while only giving us some paltry gifts or selling us weapons we don’t need. Instead please, help us to stand on our feet and become mature enough so that we could positively contribute to life and the world in general.

Africa is a gift to humanity. But Africa needs to stand up; we are dying.