Trending Now
You are at:Home»Featured»Immigration: The Distributist Solution
By Dale Ahlquist on January 8, 2012 Featured, Government & Politics, The Economy

There is one thing…that must strike all Englishmen who have the good fortune to have American friends; that is, that while there is no materialism so crude or so material as American materialism, there is also no idealism so crude or so ideal as American idealism. America will always affect an Englishman as being soft in the wrong place and hard in the wrong place; coarse exactly where all civilized men are delicate, delicate exactly where all grown-up men are coarse. Some beautiful ideal runs through these people, but it runs aslant – G.K. Chesterton.

Our inner conflict with our own ideals is reflected prominently in two very current issues. 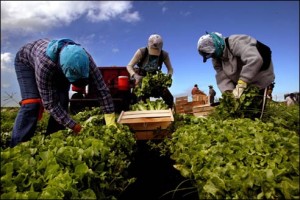 We are outraged by terrorist attacks against us. We are astonished that there are people who hate our country so much that they would risk their lives, destroying themselves even, in an effort to destroy us. We resort to explanations that are not very satisfactory, from attributing it to something simple, like “jealousy,” or to something more nebulous, such as “hatred of freedom.”

But we are also outraged when illegal immigrants sneak across our borders. We are upset that there are people who apparently love this country so much that they would risk their lives to come and live here. We explain it as “envy” or “love of freedom,” which we seem to regard as good in ourselves but not in others.

Or perhaps we grasp the sobering truth that America faces a graver danger from these foreigners who love it than from those foreigners who hate it. Terrorists are few; the immigrants are many.

In America, we worship wealth; we worship convenience. Immigrants are coming here to worship our gods with us. Why shouldn’t they? We have evangelized the world well. Our crude materialism is infectious. We have also unwittingly created the need for these immigrants to do the work of what should have been done by a whole generation of the millions of Americans who were aborted or prevented by contraception from coming into existence. We were once a land that welcomed immigrants. We were once a land that welcomed babies.

Our heritage as a nation of immigrants is no longer an active brew but an explosive mix of divided loyalty and tentative locality. Human dignity has been cheapened and the family has disintegrated. The home is no longer the center of life, but simply a place where we sleep and watch TV, often at the same time.

The danger is not that illegal immigrants are drug dealers or deadbeats. They are mostly good and honest, hardworking people. The danger is that they are willing to come here and be abused and exploited in exchange for money. It is a tragedy that so many of them believe this is their best option. It is a compounded tragedy that within the United States, a country founded upon the notion of liberty for all, we are creating a slave class, a sector of human beings who, because they are not citizens, have no legal rights. Faceless, nameless, penniless illegal immigrants are prey for wolves.

“It is cheap to own a slave,” says Chesterton. “It is cheaper to be a slave.” But slavery inspires resentment in the enslaved and guilt in slave-owners. It happened here once before and we are still living out its bitter legacy.

Once again the converging interests of those odd bedfellows, Hudge and Gudge, have conspired to prevent an effective solution to the problem. Caring only for profits, Big Business is well-served by cheap labor. Caring only for power, Big Government is content to give cheap labor to Big Business in exchange for votes. In this way the Servile State tacitly favors the influx of illegal immigrants and promotes slavery.

But the immigration problem has gotten to the point where it can no longer be conveniently ignored. However, the solutions offered are almost as laughable as they are appalling, from arresting and imprisoning millions of people, to building The Great Wall of America along the Mexican border. (Ironically, such a wall would be erected by contractors enriched by Big Government contracts, while the laborers would most likely be illegal immigrants employed by subcontractors—who are exempt from “prevailing wage” laws.)

In Mexico, there is virtually no middle class. There are enough poor to support the rich, but there are not enough rich to support the poor. No effort is made to keep an extra few million souls from fleeing north. There is only one long term solution to the problem: we need to create a more Distributist society. On both sides of the borders.

Although our laws contradict the principles upon which the country was founded—life, liberty, and the pursuit of happiness—these beautiful ideals still run through us. But as Chesterton says, they run aslant. We are out of balance. We are top heavy. We must decentralize government and decentralize commerce. A more democratic, more Distributist nation is possible, one that would be better for Americans and for the rest of the world. A Distributist society would not only take away the reason why some countries hate us, but it would give those countries that envy us a reason instead to emulate us. We have to decide what kind of country we want to be. If we do not decide, it will be decided for us.