Trending Now
You are at:Home»Featured»Improvements and Ongoing Problems in Myanmar
By ACN-USA News on June 26, 2013 Featured, International Issues, Those in Need 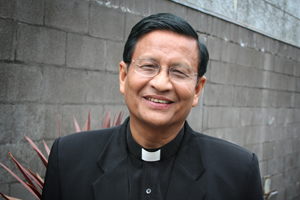 A local Catholic leader has taken a critical view of the progress of the reform process in Myanmar, noting some improvements amid ongoing problems.

The Archbishop of Rangoon, Charles Bo, made his comments at an event organized by international Catholic pastoral charity Aid to the Church in Need (ACN).

According to the archbishop, “The democratic transformation in the country in 2011 did not come as suddenly as many commentators described. Rather, the military government had been preparing the reforms for many years in order to avoid the pressure of sanctions from the USA and its allies.”

The archbishop also expressed concern about the behavior of the army during the recent conflict between different ethnic groups.

“President Thein Sein appears to be a strong man. However, he evidently does not have the military under control,” Bo criticized.

Together with the Archbishop, the Salesian priest Father Charles Saw also reported on the general human rights situation in Myanmar (formerly Burma). He noted that a certain relaxation can be observed, such as in the treatment of those found with foreign currency.

“In the past, it was the case that one could be thrown into prison for seven years for possessing one dollar,” Father Saw said.

Freedom of speech is also taken more seriously now, as he emphasized, “Previously, we were only free before speaking out; now we are also free afterwards!”

But despite these improvements, some relics of the past and some unacceptable restrictions on human rights still remain in the multiethnic state of Myanmar.

“In order to achieve high office and a position of power, one must still belong to the Burmese ethnic group and also be Buddhist,” Archbishop Bo reported.

These requirements mean that at least 30 percent of the population is excluded from political power, he pointed out.

A further problem, in the words of Father Saw, is caused by Myanmar’s administrative districts, which were artificially created by the military dictatorship.

“These were drawn up without regard to traditional tribal boundaries and ethnic groups, and are led by high-ranking military officers,” he reported.

“Many of our minorities live in regions that are rich in raw materials,” Father Saw explained. “These peoples feel that the majority Burmese population does not allow them a sufficient share in the wealth of their homelands.”

Father Saw went on to say that the latest bloody fighting between Buddhists and Muslims in Myanmar is primarily an ethnic conflict, even though it is seen in the West as having “religious causes.”

“The Burmese are mostly Buddhists and the minorities are mostly Muslims, Hindus or Christians,” Father Saw said.

Archbishop Bo did note that religion has poured additional fuel onto the flames of the ethnic conflict.

“There are some fanatics in both the Muslim minority and the Buddhist majority,” the archbishop said. “But we religious leaders of the Buddhists, Muslims, Christians and Hindus are already sitting together at the negotiating table to solve this problem.”

In conclusion, the Archbishop appealed to the US and the European Union to continue to keep a watchful eye on the process of democratization in Myanmar.

“We need the support of the international community to take our reform process forward.”