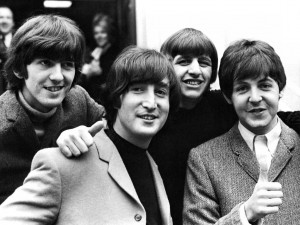 The year was 1967.  The Summer of Love.  Across America young people adopted a new way of living: “turning on, tuning in, and dropping out.”  Love, or something like it, was in the air.  But the counter-cultural movement of the Sixties caused much pain and confusion in the Roman Catholic Church.  Today we suffer from the hangover: sex and drugs and rock ‘n’ roll, but not necessarily in that order.

In the Church it has always been the best of times and the worst of times. She has always weathered the storm and offered stability in a turbulent world. Jesus said to Peter, “Upon this rock I will build my church. The gates of hell will not prevail.”

Well, those gates haven’t yet prevailed, despite our faith’s many shrill critics.  In the Sixties, musician John Lennon of the Beatles made a statement about Christianity. What famous people say cause aftershocks.  We care about what musicians, writers, actors, sports heroes, and politicians think — for some reason.  The more we conform our lives around the “Beautiful People,” the easier it is to lose sight of who we really are: disciples of the Messiah.

Lennon claimed Christianity was over.  The Beatles, he said, were more popular than Jesus.  Record sales and sold-out Beatles concerts supported his claim.  The American Baptists burned their records of that “bug music” in protest of the statement.

Lennon retracted his “prophecy” about Jesus and Christianity.  The Vatican accepted his apology.  Why would the Holy Father care if the beatnik apologized or not?  Was the pope a closet Beatles fan?

“But the words of the prophets are written on the subway walls” – and right before our eyes.  There is some truth to Lennon’s statement.  How easy it is for the true believer to drown in the sea of popular culture.

On the other side of the pond, the Second Vatican Council also happened during the Sixties.  Our very own “summer of love,” lasting from 1962 to 1965.  This year we celebrate the fiftieth anniversary of the opening of the council by Pope John XXIII.  In Rome, the Church affirmed her importance in the world.  As surely as faith is compatible with reason, so the kingdom of earth is compatible with the kingdom of heaven.  God willed it to be this way.  He made them both, and saw that they were very good.  Let there be the rock.

In 1967, the Vatican made its own statement about music.  In Musicam Sacram, his Holiness Paul VI affirmed the importance of music in prayer.  He delivered this message at Pentecost, when the Holy Spirit sanctifies the world and music is in the air.

Music is important to worship.  Sacred sound draws us into the liturgy and focuses our attention on God.  We can do a little navel-gazing, contemplate questions like how many angels can fit on the head of a pin — or we can shout and raise our hands in praise to the Lord.  Long live the King!

I am reminded of Saint Augustine, who in his Confessions recalls how he, a convert, cried when he first heard the canticles and psalms of the Divine Office, which are the prayers of the People of God.

How I wept when I heard your hymns and canticles, being deeply moved by the sweet singing of your Church.  Those voices flowed into my ears, truth filtered into my heart, and from my heart surged waves of devotion.  Tears ran down and I was happy in my tears.

These would be the very same prayers and psalms and canticles we pray today.  Augustine was no John Lennon.  But the great saint’s spiritual memoir, The Confessions, has sold more copies since it was written in AD 400 than all the Beatles albums combined.

Good writing and good music go hand in hand.  The Apostle Paul wrote about music and worship in his excellent Letter To the Ephesians.  He wrote this letter 1900 years before Vatican II.  Much of what the council produced is predicated on Paul’s vision of the Church as outlined in Ephesians.

When Paul tells the Ephesians to be Spirit-filled, he is telling us to pay full attention at Mass.  The Eucharist is a celebration.  Christ is the fulfillment of our hope in the Resurrection.  That ought to be something worth singing and dancing about!

Through the liturgy, we become empty vessels ready to be filled with the Spirit, the same Spirit that empowered the Apostles, and that inspired John XXIII and Paul VI, who carried the council through the turbulent Sixties. Liturgical music is meant to make us contemplate the divine things of God.  Augustine also said: “Qui bene cantat bis orat – Whoever sings prays twice.”

Read the Letter of Saint Paul to the Ephesians.  It’s short, just six chapters.  Read the letter every week before you go to Mass.  Ephesians offers Christians a guide to worshiping the Lord in song.  “Be filled with the Spirit … with psalms and hymns and spiritual songs, singing and playing to the Lord in your hearts, giving thanks to God.”

The Lord expects “full, active, and conscious participation” (Sacrosanctum Concillium No. 14)  As the African proverb says: “If you can talk, you can sing.”