Trending Now
You are at:Home»Featured»“Camp Virgin Mary.” Displaced Iraqis get Chapel in Baghdad
By ACN-USA News on December 15, 2015 Featured, Those in Need 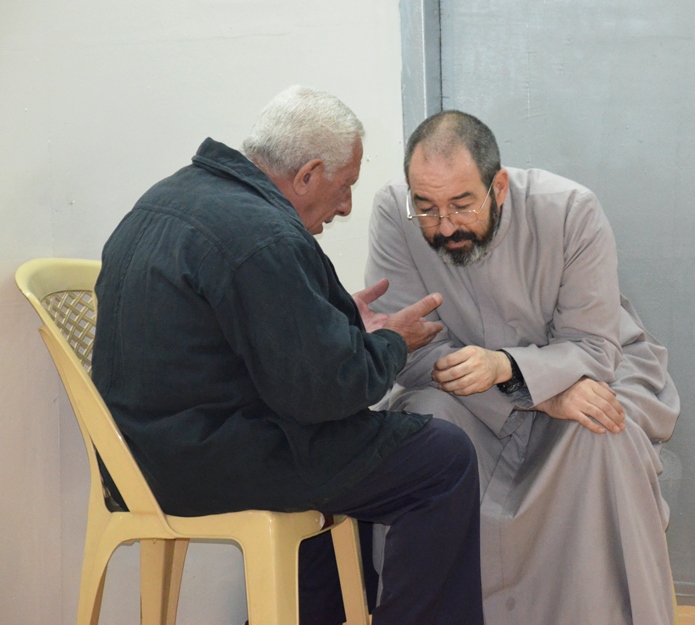 Father Luis Montes hears confession in the back of the new chapel in Baghdad’s ‘Camp Virgin Mary’; ACN photo

BAGHDAD—Father Luis Montes is glad and he has reason to be: “We have just consecrated a new chapel. It was high time that our refugees got their own small church. This gives them back a piece of the home they have lost. And the people can now go to Mass without risking their lives,” the Argentine missionary said

For five years now, the missionary, a priest of the Institute of the Incarnate Word, has been living in Baghdad, one of the most dangerous places on earth. “There were 128 bomb attacks in Baghdad in October alone,” he told international Catholic charity Aid to the Church in Need, adding: “It’s hardly surprising that the people are afraid of leaving their homes to go to Mass.” Father Montes is in charge of a camp housing 135 displaced Iraqi Christian families. He said: “Because of the danger it was important that the Church came to them in the camp.”

Most of the residents of the camp—which is named after the Virgin Mary—are Syriac Catholics. They fled northern Iraq when the city of Qaraqosh was overrun by ISIS in the late summer of 2014. The majority of these faithful are bent on leaving Iraq for the West. “None of them still harbor hope that they will be able to return to their hometowns. After all, there are no signs of liberation. And furthermore, the people have lost their faith in Iraq and in the Arab world general,” Father Montes explained.

The process of obtaining a visa for a Western country has only gotten harder in the wake of the Nov. 13, 2015 terror attacks in Paris. The people are living in limbo. Said Father Montes: “The people are suffering. Not all have found work here. In particular the fathers of the families feel useless. However, when I look at our people, I am still looking into happier faces than those in the West. They still have their faith in God. This supports them and fills them with confidence.”

Father Montes refers to the new chapel as “our little container church.” There will be a vigil liturgy according to the Syriac Catholic Church every Saturday night. The priest continued: “I only saw thankful faces at the consecration. It shows them that they have not been forgotten, that benefactors in the West are thinking of them.

“Every sign of solidarity is worth a great deal to them in their situation. And we are all one in the Mystical Body of Christ. What we do for each other becomes a blessing for all.

“The small church is helping the people here. The benefactors, however, and all believers are blessed by the suffering of these confessors of the Christian faith. They are the true treasure of the Church—one we have to take care of.”

A grant from Aid to the Church in Need helped fund the new chapel in ‘Camp Virgin Mary.’