Trending Now
You are at:Home»Featured»In Lebanon, a Major Catholic Village Walks its Way of the Cross
By ACN-USA News on October 14, 2014 Featured, International Issues, Those in Need

The village of Kaa is in the north of the Bekaa Valley, close to the Syrian border. It has a population of some 13,000 Christians, most of them Melkites. After the city of Zahle, this is the home of the country’s the largest Catholic population. Kaa is surrounded by mostly Shiite Muslim communities.

Kaa has been very poor for a long time, with government services largely absent. On July 1, 1975, Islamic extremists from adjacent villages violently attacked the community. Five people were martyred. The government did nothing to intervene. In fact, army reports at the time did not even mention the incident.

After the arrival of Syrian troops in Lebanon in 1978, Kaa residents were divided into those supporting and opposing that presence. The government cracked down on local critics, especially members of the Kataeb party. On June 28, 1978, Syrian intelligence forces arrested 15 young members. Their lifeless bodies were brought back the next morning.

That incident left deep scars. It created a climate of fear and many residents opted for moving to Beirut. At the same time, there was an aggressive push to sell local land to outsiders.

From 1978 until 2005—that is to say, during the time of Syria’s de facto occupation of Lebanon—the Syrian army took charge of security in the village. That meant a climate of repression, as well as psychological and ideological terror that came to dominate the daily life of the local population.

Ever since that time, according to well-informed sources at the municipal level, there have continued to be illegal seizures of land, and a complete absence of legality governing the allotment of housing. Inhabitants of the neighboring Sunni village of Ersal set up shop in an agricultural zone dubbed “the Kaa projects.” They built houses there, as well as mosques and schools, without any permission or any kind of regulation. This development has made local Christians afraid of a demographic shift that would erase the Christian presence in the community. 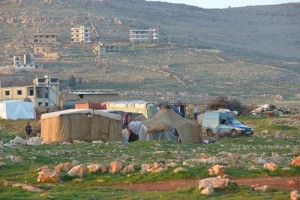 ACN photo: Muslim Syrian refugees have set up camp in the village of Kaa.

With the start of the Syrian civil war in 2011, the area came into the spotlight again. Kaa became home to 25,000 Syrians, most of them Sunni, and sporadic fighting broke out between the Syrian army and the opposition—a further setback for the people of Kaa. A number of homes were damaged and fields burned down. Trade with Syria was greatly hampered. A still worse climate of insecurity and instability was created. Each arrival of strangers triggered fears of massacres such as the ones being committed in Syria. The future for local Christians has begun to look very dark.

Throughout the history of Lebanon, the village of Kaa only made the news during crises. And so it is today, with the spill-over from the warring factions in Syria, such as Al-Nusra and Hezbollah, continuing their battles across the border here in Lebanon. The Syrian conflict is raging all along from the Syrian hinterland to chain of mountains straddling the Lebanese-Syrian border to the east, from Ersal to Kaa. The border is regularly bombed by the Syrian army, with shells and rockets striking Lebanese territory.

The Christians of Kaa are living in a state of permanent terror regarding their future—for a number of reasons:

The location of the village being right beside the border; any fighting just across the border in Syria has ramifications in Kaa;

The people of Kaa are living in territory controlled by the Shiite Hezbollah, who in support of the Syrian regime use Lebanese border villages as staging grounds for rocket attacks aimed at rebel forces in Syria;

Then there is the massive Sunni presence in the region that is home to the “Kaa projects,” an area that has continued to grow considerably in the wake of the arrival of waves of Muslim Syrian refugees who threaten to displace the local Christians.

Bands of Islamic radicals belonging to factions like Al-Nusra freely move about in Ersal, killing civilians and engaging the Lebanese army in fire fights. The people of Kaa are on constant alert in the face of the threat of terrorist organizations expanding their presence, a presence that can easily turn murderous for Christians. Just like the Christians that suffered such heinous acts at the hands of ISIS in Mosul, many residents of Kaa are driven to exile.