Trending Now
You are at:Home»Featured»In Shadow of War, Syrian Christians are Trying to Rebuild Their Lives
By ACN-USA News on July 22, 2015 Featured, Those in Need 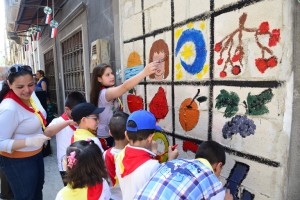 Painting in the streets of Homs: ACN photo

HOMS, Syria—Bright colors set off the sullen grey of destruction: children and young people have painted one of the streets in the ravaged Old City of this ancient Christian center in Syria. On house walls, the young artists have expressed in brilliant colours what moves them, what they hope for.

“The aim is to bring hope and joy back into our city,” Father Lukas Awad of the Syriac Orthodox Church explained. “Young people from our parish had the idea. They invited children from all over Homs. They wanted to bring some joy into the little ones’ lives.”

Homs had had a large Christian community before the Syrian civil war broke out. Many Christians lived in the Old City, where there are many churches. The Christian presence here goes all the way back to the first century. But the civil war eventually drove out the great majority of Christians from the Old City, which, although it is back under government control, shows many signs of war and destruction.

“The young people’s aim was to encourage Christians to return to their houses in the old city despite the destruction,” Father Lukas told international Catholic charity Aid to the Church in Need. “And they were successful in this. Following this project many came back, especially to the painted street.”

Dozens of families have since been inspired by this initiative, the priest said, with a few families arriving every day. Many people have seen coverage of the project on television. “After all, the area is safe,” Father Lukas insisted, adding: “The infrastructure is also working, to some extent at least. We get electricity for three hours and then we are without again. But that’s OK.

“The main problems are the major destruction of the houses and the lack of work. Furthermore everything’s terribly expensive, including construction material. We, as a Church, do everything we can. Specifically, repairing homes is a priority for us.”

But lasting peace in the region is still far off. The people of Homs were reminded of this when ISIS recently conquered the town of Palmyra—and when, in late May, Catholic priest Jacques Mourad was abducted; most recently, on July 16, there came news that Father Antoine Boutros, parish priest of the Melkite Catholic Church in the city of Shahba in southern Syria, and his driver, Saud Alabdon were kidnapped on their way to Sunday Mass. “The people of Homs are in the grip of fear; they are afraid that the war will return,” said the priest.

But Father Awad warns against despair. “As Christians we trust in God. We must be confident despite the suffering. For our Lord Jesus Christ said: Fear not for I am with you.” Father Lukas reports that the people were praying a lot. And the fact that bishops, priests and those in religious orders had never left the side of their communities even in the worst times had strengthened faith in the Church. “We as a Church are doing everything we can to strengthen our faithful spiritually, as well as materially.”