Trending Now
You are at:Home»Featured»In Ukraine, ‘You Have Be Crazy About God to Persevere’
By ACN-USA News on September 1, 2015 Featured, International Issues, Those in Need 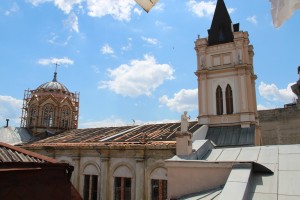 The cathedral of Odessa under repair; ACN photo

NEW YORK—“Priests who do not have a calling will not last long here in the Ukraine.”

Such, plain and simple, is the verdict of Roman Catholic Bishop Bronislaw Bernacki of Odessa-Simferopol. Soviet-era communism may be long gone, but the local Church is still in rebuilding mode, the prelate said in an interview with international Catholic charity Aid to the Church in Need, insisting that “you have to be crazy about God to persevere here.”

A large problem for particularly the Greek-Catholic Church in Ukraine is that many of the buildings that were once church property were taken over by communist authorities and the properties have yet to be restored to their proper owner. In one case, a church had been turned into a bus station! Odessa’s cathedral served as a gymnasium in Soviet times!

Former Church buildings now owned by the state are more likely to be returned than properties that have been sold to private owners along the way; in the latter case, the Church would be forced to buy back its former possession.

The cathedral of Odessa was returned to the Church in 1991, but not the surrounding buildings that were once owned by the Church as well. These are now in the hands of private parties who, assuming the Church is rich, are seeking a high price for the properties. The situation makes for very cramped and difficult living conditions for priests and prelates alike. Auxiliary Bishop Jacek Pyl, who usually works in Crimea but is no longer able to return there, is living in the room of a priest currently studying in Rome. Up until recently, Bishop Bernacki himself was living in a steeple!

The Roman Catholic Archdiocese of Kiev-Zhytomyr is also suffering badly from a lack of space. The priest in charge of the cathedral of Kiev is living in one of its steeples; while Archbishop Petro Herkulan Malchuk has to pass through the living quarters of a family of strangers whenever he wants to enter his small flat.

The Roman Catholic parish church of St. Joseph in Dnepropetrovsk deserves special mention. The communists confiscated the church in 1949. First turned into a so-called “Monument of Communism,” the building has changed hands numerous times. In 2007, a group of Catholics praying in front of the church were assaulted by security guards, who even beat up on elderly women among the group. It was only in 2009, following a long and difficult legal battle, that ownership of the former church was returned to the Catholic Church. Its re-consecration was occasion for a splendid celebration.

A functioning Church has great symbolic and practical value. Ukrainians are eager to return to Church. However, the fact that many Masses are still held in private apartments—a common practice under communism and one that continues for lack of churches today—misleads many in thinking they are dealing with some kind of sect.

Aid to the Church in Need has helped build or renovate numerous churches and catechetical centers throughout the country. Last year alone, the organization contributed $5.2M in aid to Ukrainian Church communities.