Trending Now
You are at:Home»Featured»The Inquisition of the Knights Templar
By Ryan Roessler on March 11, 2013 Featured, History, Learn & Live the Faith, Uncategorized 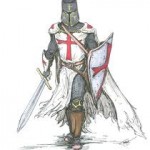 Warriors, monks, Christians: the Knights Templar were all these things, but according to the pope they were also heretics. These knights for Christ had once been some of the most respected people in Europe and known as models of Christian virtue. But as the world began changing they incurred the wrath of kings and priests alike and were dubbed heretics. Their guilt is still very much in question today. This paper will discuss the arrest, trial, and eventual repression of the Templars at the hands of Pope Clement V and the charges against them.[i]

The Templars were the largest, most powerful military order in the Christendom world that for years had protected God’s people in every corner of the Christian world. Officially known as the Order of the Poor Knights of Christ and the Temple of Solomon, the Templars were founded in 1120 after the First Crusade with the goal of being warrior monks for God. The knights took the same vows of poverty, chastity, and obedience as other monks and followed the rule of the Cistercians. Throughout the Crusades the Templars distinguished themselves in battle winning prestige, honor, and an enormous fortune. This fortune acquired through gifts from kings and revenue from their banking system would be the primary reason for their problems in the years to come.

The Inquisition of the Templars was started by King Philip IV of France in the year 1307. For years Philip had borrowed huge sums of money from the Knights to finance his wars against England and the Templars were now calling in his debt. The problem was France was bankrupt and Philip had no way of repaying his debts and soon the pope was threatening to confiscate France’s property unless the debt was repaid. In desperation Philip turned to a former Templar named Esquin de Floryan who for years had been accusing the Knights of various crimes. De Floryan accused the Knights of being heretics who “did not believe in the Mass or other sacraments,”[ii] practiced sodomy, spat on the cross, and “worshipped a demonic idol called Baphomet”.[iii]

It is ironic that the king chose to bring these accusations against the Templars, which were unheard of at the time, when there were other far more believable charges he could have brought against the Order. For years it had been thought that the Knights had amassed their fortune through “fraudulent banking practices, scamming kings, and selling their special legal rights reserved for them alone by the pope”.[iv] The Order was also under suspicion at the time of abandoning the Holy Land to the Arabs rather than fighting to the death. Of course this made little difference since it was “The Templars’ independence power and wealth rather than their alleged heresy, probably motivated Philip”.[v]

The King brought his charges to three different popes before Pope Clement V finally agreed to investigate the charges. In response to Philip’s accusations Clement called a special Church Council in Vienna to discuss the matter and to begin a formal investigation. Philip however was not interested in a real investigation and running the risk of the Templars being found innocent.

At the crack of dawn on October 13, 1307 Philip’s soldiers attacked every Templar possession in France including the Temple in Paris where Templar Grand Master Jacques de Molay was staying. The Knights offered little resistance and were arrested. At first the pope was hesitant to imprison the Knights but at Philip’s urging ordered all Christian kings to arrest any Templars in their kingdoms. Some, such as King Edward of England, were reluctant at first to imprison his former military allies but obeyed the pope once he realized he could also confiscate all the Templar property in his realm. With the Templars in prison the inquisition began.

There were really two simultaneous inquisitions of the Order going on at once. One was commissioned by the pope and resembled more of a fair trial with lawyers and witnesses for both sides. This investigation “found that the Order and its rule was orthodox but had some disturbing rituals in its initiation ceremonies”.[vi] This investigation’s findings would never be brought to trial. The second was commissioned by Philip and was run by his minister Guillaume de Nogaret. This was far from a fair trial which relied almost entirely on torture to get the knights to “confess” to their heresies.

Indeed many Templars did confess under torture but recounted their confessions during their trials. However recounting their confessions gave the Nogaret’s lawyers the opportunity to denounce them as relapsed heretics with no hope of coming back to the truth. Many of these “relapsed heretics” were burned at the stake. The few Templars trained as lawyers were among the first to be executed. The Vienna Council finally began its hearing in 1312 to decide the fate of the Order. This council was set to vote on the guilt or innocence of the Order and if it should be disbanded. With Philip’s army camped outside the city gates the council narrowly voted to repress the Order. “On March 22, 1312 Pope Clement V issued the papal bull, Vox in Excelso, suppressing the Order”.[vii] The Order of the Knights Templar was dead.

Once the Order was repressed most of the knights were reassigned by the pope to other military orders while the leaders were burned at the stake as heretics. On March 18, 1314 Jacques de Molay the last Templar Grand Master was burned at the stake in Paris on an island in the Seine River as a relapsed heretic. According to legend de Molay put a curse on both Clement and Philip “summoning them both to appear in the course of the year before the tribunal of God”.[viii]  By the end of 1314 both were dead. The next question that arose was what to do with the Temple’s treasure. The pope decreed that it was all to go to the Knights Hospitallers a religious military order similar to the Templars. In reality however most of it stayed with Kings Philip and Edward and never reached the Knights Hospitallers.

To this day it is debated whether the Templars were truly heretics or the victims of a power grab by an evil king and a weak pope. Perhaps they were both. Regardless it is clear they were not given a fair trial to defend themselves and their repression was at least somewhat politically motivated. The Inquisition seems to have been more of a witch hunt than an actual trial. The Templars were not perfect but did they really completely turn their backs on the faith?

[i] I am indebted to the following works that were consulted during the writing of this essay: