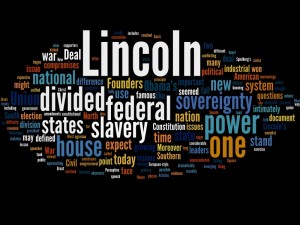 Having just viewed Steven Spielberg’s “Lincoln,” and knowing that Lincoln’s birthday is approaching, it seemed fitting to ponder one of Lincoln’s most famous speeches, and perhaps a lesson for Americans today.

On June 17, 1858, Lincoln gave his famous “House Divided” address while being nominated to run for the U.S. Senate seat in Illinois. Lincoln told his friends, who objected to that phrase, that he chose it because it was a biblical idea familiar to the American public. Lincoln quoted Jesus Christ: “A house divided against itself cannot stand” (Mark 3:25). Lincoln went on to say, “I do not expect the Union to be dissolved—I do not expect the house to fall—but I do expect it will cease to be divided. It will become all one thing or all of the other.”

At the time of the speech, Lincoln had already been intimately involved in national debates about the nature of the Union for more than a decade. He was prescient about many things, including the coming of war.

How did the Civil War come about and how did Lincoln understand it? What was the basis of this struggle that divided the nation? What prompted Lincoln to speak of a “house divided?”

The Founders had not settled the questions of black slavery and of sovereignty—both at the state and national levels. They did not because these issues were intimately tied together and at the heart of how the nation defined itself.

As for sovereignty, each state had claimed it fully under the Articles of Confederation. That document did not work well, so a convention was called to create a wholly new document—the federal Constitution of 1789. But, the new Constitution did not deal directly with the questions of slavery and sovereignty either. The Founders, and their successors for several generations, were content to deal with these issues by a series of compromises. As we say today, they “kicked the can down the road.” Typically, these compromises were like “The Compromise of 1820,” whose principle feature was to admit two new states at the same time—one with and one without slavery. Many, like Lincoln, had no difficulty with this practice because they believed that slavery as an economic system was failing and would die out in the face of the growing industrial revolution.

By 1850 the compromise system was breaking down as many Southern leaders began to vigorously advance the doctrine of the supremacy of state sovereignty. Moreover, the difference between an emerging industrial North and a continuing cotton-based, agrarian South revealed that the North and the South had different visions of what the nation ought to be. Lincoln understood this and spoke about it often.

The election of 1860 was crucial in deciding whether the house divided would stand or fall. Republican Lincoln was one of four presidential candidates in that election. He won. Southern states seceded. The war came. The primary issue was not slavery, but, as Lincoln said, the preservation of the Union. The Union won, and the house was no longer divided, or so it seemed.

During the war, and after, congressional statutes, constitutional amendments, and a reconstruction program abolished slavery and defined national sovereignty, all through the exercise of unprecedented federal power. This is a very important point. Reconstruction ended in 1877, and national leaders turned their attention to the settlement of the West and a rapidly expanding industrialism. It took a long time—decades—but that expansive federal power used to end the Civil War continued to grow and eventually became an important political issue, even a defining one.

It seems to some that Obama’s agenda includes a use of power that echoes European-style socialist states. But, there is one huge difference: The American system grants considerable power to the president—which Obama’s followers seem eager to use, or threaten to use.

Perceptive observers see that the Founders’ view conflicts with Obama’s. Recent political gridlock in Congress and in the states is evidence of this fundamental division. This division has not yet reached crisis proportions, but it may not be far away. There are murmurings in some states to secede in the face of massive and growing federal power. Moreover, it is possible that the federal government may spend itself into oblivion.

If Lincoln were with us today, he might ask: “Is America’s house divided again?” He might suggest, too, that it cannot stand unless the conflicting visions are resolved, one way or another.