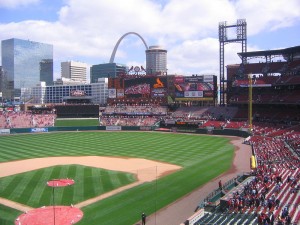 Screaming erupted in our family room this past Friday as the St. Louis Cardinals came up with four runs in the ninth inning to derail the estimable Washington Nationals in the early morning hours not long after midnight. They managed to resurrect themselves from a 6-0 deficit from the early innings, thereby duplicating their performance in the sixth game of the 2011 World Series in which they, ultimately, triumphed. In the process the Cards robbed the Nats of the opportunity to take on the San Francisco Giants for the National League pennant.

On Saturday morning Washington fans had to console themselves with a hard truth: Life is not fair. Maybe God is, truly, a St. Louis Cardinals fan. It must feel like getting hit by a truck.

“Were the Cardinals really down to their last strike on five different pitches?” asked Thomas Boswell, one of the great sports columnists, in a piece on the front page of the Washington Post‘s main section. “How many checked swings on the sliders of loser Drew Storen would have ended their season had they gone another foot?”

Boswell’s column is painful to read, a kind of self-therapy in preparation for the long winter ahead. “But it was so close — hold fingers inches apart — a League Championship Series against a team the Nats dominated in five of six meetings during the regular season.”

“Then the reason that the Cardinals are the defending world champions — as well as one of the toughest and most fortunate teams of recent decades — began to come clearer and clearer,” penned Boswell. What happened last Friday night, before the largest crowd in Nationals Park history, 45,966,”was nothing short of diabolical…”

Or providential maybe. These are, after all, the World Champion St. Louis Cardinals with more appearances at the big party than any other team but for the New York Yankees. Yet, truly, my wife and I, residents of northern Virginia for over a decade, love the Nationals and would have rooted for them over any team but one. Yes, once a Cardinal fan, always a Cardinal fan. Our grandchildren will pledge their fealty to the Nationals as they should. But we are who we are.

And, boy, it is great to be a Cardinal fan. After indulging Tom Boswell’s morose musings, read Bernie Miklasz, sports columnist for the St. Louis Post-Dispatch who, on Saturday morning, gave voice to the joy in his heart and every Birds fan from Kentucky to North Dakota, Washington, D.C. to west Texas.

“On a bracing Friday night that felt chilled and charmed, just like the enchanted autumn of 2011, the Cardinals gave us one of the all-time shockers,” wrote Miklasz laying it on with a trowel. “It was something out of the imagination, a baseball fable that couldn’t be real. Except it did really happen, and if you closed your eyes and listened intently, you may have heard the echoes of the late Jack Buck barking ‘Go crazy, folks. Go crazy.'” All genuflect here.

Miklasz reminds us what we already knew but wanted to hear again: “The retired future Hall of Fame manager Tony La Russa wasn’t here to push them on, and the menacing Albert Pujols wasn’t waving a bat at the Nationals, playing his customary role of enforcer. None of it mattered during this 3 hours and 49 minutes of mayhem and madness.”

“The Cardinals are still the team that wouldn’t die,” says Bernie Miklasz.

What this is really all about is tradition and culture, both those of St. Louis and the Cardinals organization which manages one of the most successful teams in a media market that make the Mad Men chuckle. It encompasses the likes of Stan Musial, Bob Gibson and Ozzie Smith. But as Miklasz notes, it now includes a rookie shortstop, Pete Kozma, whose game winning two-run single “left the Cardinals jumping and screaming in their dugout.” This kid was just brought up from the minor league, a product of a system designed for the long haul.

Let’s face it, Cardinal baseball could not afford the money Pujols demanded from St. Louis and got from Los Angeles. They offered what they thought was prudent, and told Albert to go with God when he turned them down. So they cut a deal with Carlos Beltran that has proven to be fair but frugal and worth every dollar. Friday night, he got on base in all five of his appearances at the plate and commenced the crucial ninth inning with a double. This is more evidence justifying praise for the entire Cardinal organization, not just any given player or star. Maybe they will put up a statue for Carlos outside of the new Busch Stadium if he can do this a few more seasons.

I have no doubt that some day, someone, maybe even me, will write about the coming glories of the Nationals, their energy, pride, and unbelievable pitching staff.

Regarding the Nationals and their encounter with the Cardinals this fateful season, Tom Boswell offered these wise observations:

This week, the Nationals ended a season but probably began an era. After generations of competitive starvation, the District hosted three playoff games with the Nats holding the best regular-season record in the sport.

There will be other seasons. But, for the Nats, none so thrilling, so shattering, so moving, as the first — the first, that is, that really mattered.

Now it is on to the City by the Bay.