Trending Now
You are at:Home»Featured»Is It Time for an Urban Version of the Homestead Act? Part 1
By Grace Potts on December 8, 2011 Featured, The Economy 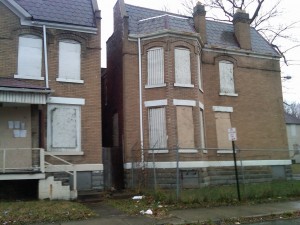 I was born in Norwich, CT at William Backus Hospital; and lived in Norwich until I was three years old. My family then moved to Hartford, my father worked downtown as a State employee and I was raised in Hartford until reputable families fled the city for the suburbs. East Windsor was home until college, when I attended the University of Connecticut. I currently live in Michigan, but have kept abreast of happenings in my home town and state for the many years since I moved away from the area, because I love my home. There is a part of me that can never leave that place. Most recently, I have been intrigued by the Town of Preston and the City of Norwich’s work on the former Norwich State Hospital site. Incidentally, this is the hospital that my father worked at when he first moved our family to the East Coast, and there was no lawyering work to be found. Aside from the personal connection, I am intrigued by the position that Preston and Norwich find themselves in. These municipalities have a situation which is actually quite common throughout the Northeast and Midwest, they have a huge swath of land that was previously developed—significant infrastructure investments already made, generations ago—that no body seems to want. That’s not entirely accurate. Developers would love to take ownership of the property, claim numerous state, federal, and local grants to strip the land bare, and build a “new, modern community”; “remediate the brownfields”; and collect a tidy paycheck on the other end of the deal. Leaving the town – and the people in it – no more enriched than it already was; and probably impoverished by the presence of national and multinational chains, strategically positioned to siphon more from the community than it spends there.

I would like to think that Norwich and Preston would jointly work to house their homeless and employ their unemployed residents with this property. Likely though, some Boston developer will get the money and the opportunity instead of the people that live there. I’m confident there will be some loose-lipped rhetoric about ‘bringing jobs’ to the area, and ‘supporting business’.

There are myriad reasons for the residents of a community to redevelop unused property in their locality. Chiefly, citizen-led development and locally-owned small businesses are the bedrock of the tax base and the backbone of a stable, healthy economy. This much any Distributist worth her salt should already know. Rest easy though – I do not plan to exhaustively explain all the remaining myriad reasons here. Rather, my goal is to just lay an audacious idea out on the table, give you a little background, and to make a modest suggestion. I will start here in part one with the idea itself, and then continue on with some background articles that inspired the idea. Then, I’d like to make you an offer you can’t refuse. It is my hope – not to convince you, but to spark your imagination.

Quite simply, the idea is to create a municipal level version of the Federal Homestead Act, either in name or practice. A city would offer vacant land and any structurally sound existing buildings to be homesteaded by any who wished to stake a claim. Homesteaders would file a claim; live on and improve/develop the property for seven years as a primary residence, keep the taxes current; then receive a clear deed to the property.

There would be some important differences in this homesteading program though. The first and most important difference is that no one would be displaced. Secondly, this program would have a small business incubator to facilitate homesteaders creating businesses on their homesteads. Agricultural enterprises, and other small, locally owned businesses in a variety of industries would be developed and supported in their formative stages with business planning, funding and networking. Lastly, the program would ultimately be open to any that apply, but the first opportunity would go to current municipal residents, followed by State residents, then the general public. The participants would then undertake the work of redeveloping the property—each parcel in its own way—into a modern, sustainable, human-scale village.

This is the kernel of an idea that has been with me for a long time. But I’m certain I’m not the only one who’s thinking it, and the opportunity for just such a program exists in many, many cities and municipalities throughout the Midwest and Northeastern United States.  I’ll  touch on a few of the things that have inspired this thinking in the next installment, and I’ll also propose some action.  Until then- pax, caritas, et bonum.