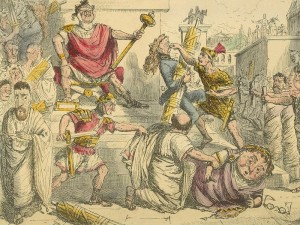 “When one with honeyed words but evil mind persuades the mob, great woes befall the state.”
– Euripides, Orestes

Raised and praised by Marxists, Barack Obama sought them out for friendship and mentoring in college. He taught Alinsky Marxism at ACORN and he appoints them as czars and consultants as President. Five years into Barack Obama’s “fundamental transformation” of our country, the President finds no opposition party, a complicit press-corps, and a panoply of “conservative pundits” who look and sound more like the Lords of Scotland’s betrayal than they do William Wallace.

If the future of this country depends on the strength and integrity of Krauthammer, O’Reilly, Fox News and the National Review, we are of all men most miserable – lest of course, the determined, ambitious, ruthless, Machiavellian Alinskyites in the other corner will be intimidated into surrender by our champions’ campaign of “kvetch and retreat.”

The above are all recommending that the Republicans just go along with Obamacare now and not defund it, which is like saying that Thelma and Louise are already driving so sit back and enjoy the ride. Underwhelming is one word that comes to mind, at least the one that won’t get redlined by my editor. Even Victor Davis Hanson in his column, “Obama’s Watergates,” will only go as far as calling Obama – “Nixonian to the core.” As if the comparison to a third rate burglary and its messy cover-up is the moral equivalent to perpetrating a fraud to overthrow the 2nd Amendment with Fast & Furious and allowing heroes to die to cover your phony Arab Spring in Benghazi.

Don’t waste your time hoping for impeachment or indictment. The sheriff of Nottingham won’t bring King John to justice. Forget about the press, they’re not going to “vet” him; the Senate will not try him and the Republicans will not oppose or even challenge him. “We the People” must rise up. We must hold them all accountable.

I know it’s hard but let’s forget for the sake of argument all of the high crimes and misdemeanors that the President has committed to this point; at least the ones that we know about. Aside from targeting political enemies with the IRS and using NSA wiretapping against American citizens including the President’s perceived enemies in the press; let us for one moment concentrate on Benghazi.

Americans needed help and begged for it. Help was there, ready and willing but was called off. Commanders who disagreed, including multiple generals and at least one admiral, have been forced to retire or resign. Witnesses on the ground have been threatened if they come forward. Their families have been threatened. I’m sorry, but American Presidents don’t do that to American heroes. The syndicate does. The mob would. Chicago thugs do. And so do tyrants.

This is not “soft” tyranny, this is not coercion, this is extortion. Incessant polygraphing of CIA agents, hiding witnesses around the country, putting them into a witness protection-like system to avoid congressional oversight and to prevent the truth coming out is beyond an impeachable act. It is beyond the “soft” despotism that but a few whisper about. This is tyranny!

And who is talking about it? Oh, I know why the big box talkers won’t go there – they don’t want to lose GOLDLINE and SELECT COMFORT and they’re in the game to count how many markets that they’re syndicated in; but what of our representatives? What of the editorial boards and the bravery of our university professors? When they should already be biting, the watchdogs of freedom have lost their bark. The lapdogs are heeling and playing dead. Time to get off the porch, patriots!

Wringing our hands and bickering about the GOP as the President and his apparatchiks dismantle the Republic isn’t actually a plan for victory. Personally, Chris Christie is only a threat to me if he’s within arm’s length of my Krispy Kreme, but his capitulation along with Romney’s and Krauthammer’s is the equivalent of the lords abandoning the field at Falkirk when Wallace waved the sword.

Chesterton had it right when he wrote, “The wisest thing in the world is to cry out before you are hurt. It is no good to cry out after you are hurt; especially after you are mortally hurt. People talk about the impatience of the populace; but sound historians know that most tyrannies have been possible because men moved too late. It is often essential to resist a tyranny before it exists.”

What’s that, you cry, “The glass is half empty?” – Look, smash the damn glass! I don’t know if we will win or we will lose but I do know that I’m in the 300. I don’t quite know if I’m following Gideon or Leonidas or if we’ll be playing a triumph or a funeral dirge when the Shih Tzu hits the fan, but I do know that I hold a sword and I’ll stand my ground.

Win, lose – doesn’t matter! The outcome is not the issue. The issue is “Am I faithful?” SEMPER FIDELIS is the Marine code, not SEMPER VINCIT. I’m tired of these pussy willows that won’t enter the battle unless they’re sure of a victory. They seem to bloom in every crisis and they’re the “summer soldiers” that Paine rebukes in THE CRISIS:

These are the times that try men’s souls: The summer soldier and the sunshine patriot will, in this crisis, shrink from the service of his country; but he that stands by it now, deserves the love and thanks of man and woman … Tyranny, like hell, is not easily conquered; yet we have this consolation with us, that the harder the conflict, the more glorious the triumph.

So, to Charles, Bill, Chris and Victor Davis: “Dietrich – Up,” Lassies! Real men ride to the sound of the roar!

[This article first appeared at clashdaily.com.]