Trending Now
You are at:Home»Featured»Is Whether Mormons are Christians a Political Question?
By Ken Connor on October 19, 2011 Featured, Government & Politics

A man who was merely a man and said the sort of things Jesus said would not be a great moral teacher.  He would either be a lunatic – on the level with a man who says he is a poached egg – or he would be the devil of hell.  You must take your choice.  Either this was, and is, the Son of God, or else a madman or something worse.  You can shut Him up for a fool or you can fall at His feet and call Him Lord and God.  But let us not come with any patronizing nonsense about His being a great human teacher.  He has not left that open to us — (C.S. Lewis, Mere Christianity) 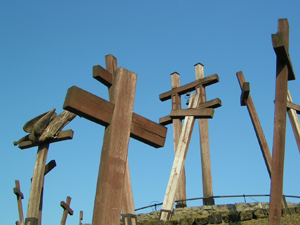 C.S. Lewis’s famous “trilemma” confronts those who affirm the moral teachings of Christianity while distancing themselves from Christ’s more difficult declarations about His deity, man’s sinfulness, and the narrowness of the path to salvation.  Jesus’ famous “Golden Rule,” is enthusiastically embraced in postmodern society while his other teachings are widely rejected.  Accustomed to defining their own reality, postmodernists pick and choose from Jesus’ teachings as if He offered them some kind of spiritual smorgasbord.  “Do unto others as you would have them do unto you” is selected as a delicacy, while “I am the way and the truth and the life.  No one comes to the father except through me” is rejected as distasteful.

The tension between benign Christian morality and the exclusivity of the claims of Christ recently came into play when Baptist Preacher Robert Jeffress – by way of expressing his support for Rick Perry’s presidential candidacy – asserted that Mitt Romney is not a Christian and that Mormonism is a cult.  In an interview with Anderson Cooper, Jeffress clarified his point, explaining that from a theological perspective, Mormonism is considered a cult because it is outside the historical tradition of Christianity, it recognizes a human being (Joseph Smith) and not God as it’s founder, and it regards extra-Biblical texts (The Book of Mormon; The Pearl of Great Price) as being on equal footing with Holy Scripture.

For his part, Cooper seemed offended that Jeffress would presume to judge the claims of another when it comes to religious identity.  If someone says they are a “Christian,” then who is to say otherwise?  If the Mormon Church says it is Christian, then that is their truth and no one has a right to refute it.

This gets back to Lewis’s “trilemma,” and the dissonance that occurs when society affirms Christ’s moral teachings, but rejects his other claims.  As Lewis points out, Christ did not leave this way open to us.  He made very specific assertions about His nature and that of humanity which we either believe or not.  Therefore, we cannot all call ourselves “Christian” unless we empty the word of its meaning.

We believe in One God, the Father Almighty, maker of Heaven and Earth, of all that is – seen and unseen.  We believe in One Lord, Jesus Christ, the only Son of God, eternally begotten from the Father.  God from God, light from light, true God from true God, begotten not made, of one Being with the Father, through Him all things were made.  For us and for our salvation, He came down from Heaven.  By the power of the Holy Spirit, He became incarnate from the Virgin Mary, and was made man.  For our sake he was crucified under Pontius Pilate.  He suffered, died, and was buried.  On the third day He rose again in accordance with the Scriptures.  He ascended into Heaven and is seated at the right hand of the Father.  He will come again in glory to judge the living and the dead, and His kingdom will have no end.  We believe in the Holy Spirit, the Lord, the giver of life, who proceeds from the Father and the Son.  With the Father and the Son He is worshipped and glorified.  We believe in one holy catholic and apostolic church.  We acknowledge one baptism for the forgiveness of sins.  We look for the resurrection of the dead, and the life of the world to come.

This creed incorporates the historic tenets of the Christian faith.  Therefore, when an individual or group holds itself out as “Christian,” it is a fair exercise to evaluate how their beliefs align with this historic affirmation.  That’s true whether Anderson Cooper likes it or not.  Does Mormonism fit within the historic definition of Christianity or not?  Do Mitt Romney’s beliefs conform to what Christians over the centuries have affirmed or not?  Does the word “Christian” have objective, propositional meaning or not?  If it does, then isn’t it fair to test the claims of those who call themselves “Christian” against those beliefs that have historically been associated with that religion?

Of course, we live in a free society and people can identify themselves however they choose, but merely saying something doesn’t make it so.  I can say I’m the Queen of England if it makes me feel good about myself, but this self-delusion won’t carry any weight with those guarding the gates of Buckingham Palace.

Pastor Jeffress real sin in the eyes of Anderson Cooper may be that the Reverend deigned to mix religion with politics in an apparent attempt to create a political advantage.  If that was the case, then Mr. Cooper‘s indignation may have been justified.  Article VI of the United States Constitution provides that “…no religious test shall ever be required as a qualification to any office or public trust under the United States.”  And long before our Constitution came into being, none other than Martin Luther declared, “I would rather be governed by a competent Turk than an incompetent Christian.”

That said, the question remains, “Are Mormons Christian?”  Since Mormons assert that they are, isn’t this a fair subject of public debate?  Since religious truth claims have eternal consequences, isn’t it in the public interest to examine the merits of those claims?  The election of a Mormon president will likely do more than any other single event to mainstream Mormonism into American life, with all of the consequences attendant thereto.  That being the case, why should the claims of that religion be any more immune from scrutiny than those of any other religion?

America will be a poorer country when we reach the point where discussions about religion and our eternal destiny can no longer be part of the public dialogue.