Trending Now
You are at:Home»Featured»ISIS Said to Have Begun Executing Captured Syrian Christians
By ACN-USA News on February 27, 2015 Featured, International Issues, Those in Need 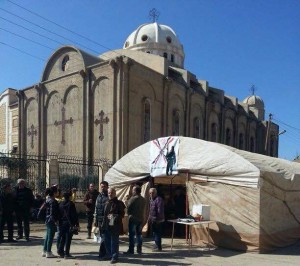 In a fast-developing, highly fluid story, there are now reports that ISIS has started killing hostages seized after it captures Assyrian Christian villages in Syria’s Hassake governorate—reportedly 15 kidnapped Christians may already be dead.

In a message sent to Aid to the Church in Need Feb. 26, 2015, Iraq-based Archimandrite Emanuel Youkhana passed on news of the executions from a contact in Hassake city, adding that the number of Assyrian Christians being held by ISIS exceeds 350.

Reports indicate that of the Tel Hormizd fighters one woman has been beheaded and two men have been shot. There is no information about who the other executed captives might be. But they may be some of the 13 Christians from various other villages, who were seized while offering resistance to their attackers.

In addition to these fighters, 81 people were seized from Tel Jazira, 21 from Tel Gouran, five from Tel Feytha and three from Qabir Shamiya. All of the above are being held in the Arab Sunni village of Um Al-Masamier. Also, 51 families from the village of Tel Shamiram have been taken, with an average of five persons per family.

Archimandrite Youkhana said: “It is believed there are casualties and many Assyrians have been killed in the village.” He added that there was no news about where the families were being held: “Most probably they have been captured and transported to Mount Abdul Aziz, a nearby region controlled by ISIS.”

There  unconfirmed report that the mosque in the Arab Sunni village of Bab Alfaraj had called on people to attend “a mass killing of infidels” at Mount Abdul Aziz today, Feb. 27, 2015.

There are no families left in the 35 Assyrian Christian villages, all remaining villagers have now fled to Hassake or Qamishli. The number of registered displaced families stands at 800 families in Hassake and 175 in Qamishli. That number may reach 1,200 families.