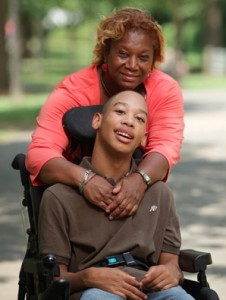 In 2001, I wrote the following first paragraph:”On January 22–on the 28th anniversary of Roe v. Wade–North Carolina Superior Court Judge Charles Lamm sentenced 27-year-old Rae Carruth to a minimum of 18 years and 11 months in prison for his role in the execution-style murder of his pregnant girlfriend. Miraculously, doctors were able to save Cherica Adams’s baby.”

Even now, my stomach turns when I think about the horrific murder of Miss Adams. It was like something out of the Godfather movies.   Adams’s car is trapped in between Carruth’s car (which had suddenly stopped) and the assailant’s car.

Seconds later Adams is shot four times. After calling the police, the mortally wounded woman went into a coma. In spite of everything the medical staff did for her, Cherica died a month later. Why? Because she’d refused to abort.

Between the shooting and the time the baby was delivered by emergency C-Section, nearly 70 minutes had passed. Although the baby’s brain was deprived of oxygen in the aftermath of the 1999 shooting, he was born alive. However the brain damage resulted in cerebral palsy.

Years later I wrote a second time about Chancellor Lee Adams, the baby boy whose survival (it is a ridiculous understatement to say) is a miracle. All four bullets missed him. The one that killed his mother missed her uterus by an inch or two.

The second story I wrote was based on a CNN interview conducted years later with Cherica’s amazing mother, Saundra Adams, which took its inspiration from the incredible progress Chancellor had made. A neurologist had told Saundra that Chancellor would never walk or talk. By then he was already doing both, and much more.

This week Sports Illustrated ran a “rest of the story” piece on what Thomas Lake, the author, titled, “The Boy They Couldn’t Kill.”

It is one of the most remarkable pieces of journalism I have read in years (http://sportsillustrated.cnn.com/vault/article/magazine/MAG1206007/index.htm).

I promise that you will find his story positive riveting, so, too, a sidebar in which Lake writes about how he came to write the story (http://sportsillustrated.cnn.com/2012/writers/thomas_lake/09/07/rae-carruth/index.html#ixzz272YWboBQ).

To this day Carruth professes his innocence. As Lake makes clear, Carruth’s defense was highly implausible and his various and sundry appeals relied less on what he claimed had really happened than his attempts to suppress what Cherica Adams said before she lapsed into a coma. He unsuccessfully appealed the verdict from 2001 until 2011.

Cherica was not the first woman he’d impregnated. Carruth already had a four-year-son but provided no child support until the woman took him to court, the story tells us.

“Even then, after a judge issued a temporary order requiring him to pay $5,550 a month, he met with the mother and she agreed to accept just over half that amount on condition that he be a better father,” Lake writes. “Spend more time with the kid. And after he had failed to do that, according to her testimony, she called him and they had a spirited discussion and he told her not to be surprised if she got into a fatal car accident. Then he said he was only joking.”

The second girl was 17 years old. “[W]hen she told him she was pregnant, he told her she couldn’t have the baby,” Lake writes. “She later testified that he said, ‘Don’t make me send somebody out there to kill you.’”

Lake adds, “She got the abortion.”

But the thrust of the story is not that Carruth is a horrible human being, although that is easy to conclude. It is rather the life-affirming, uplifting stories of two amazing people: Saundra Adams and her grandson, Chancellor Adams.

Saundra Adams is resolutely determined not to allow hatred for Carruth’s actions to destroy the rest of her or Chancellor’s life. In light of all that she lost, her forgiveness leaves the ordinary mortal speechless.

Lake quotes Saundra’s passionate remarks when the judge was deciding what sentence to mete out. Carruth “has not shown one single ounce of remorse, to me or anyone in my family, there’s not been one ‘I’m sorry about what happened to your daughter,’” she said. “But in my heart, because I’m a Christian, as an act of my will, and because I know it’s out of obedience to God, I am forgiving Rae Carruth.”

As she told Lake this summer, “I’m not gonna have anything negative to say about him.” Instead she pours her heart and soul into raising her grandson, the other remarkable person in this story.

In his sidebar, Lake says he struggled to find the right words to describe the twelve-year-old Chancellor. ”None of them say it strongly enough. He is the happiest person I’ve ever met. There’s a light inside him that I’ve never seen anywhere else.”

Lake says other people tell him Chancellor has the same astonishing effect on them. He concludes with this:

“Wherever he goes — to church, to physical therapy, to the Special Olympics — he makes people feel better by his mere presence. When he looks into your eyes and says hello, the whole thing feels almost spiritual. And then, of course, you have to ask yourself: If a kid like this can be so happy, what right do I have to complain?

“How did a brain-damaged infant become a young man of such mesmerizing power? It has something to do with the power of love.”