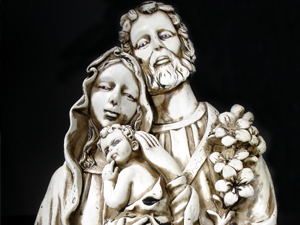 It’s the great Latin admonition of the Church, to seek the intercession of the Patron Saint of the Church, and a powerful intercessor at that. Against the backdrop of the new aggressive eugenics that has taken solid root in American medicine, and against the war on the Catholic Church declared by the Obama administration, this Feast Day of Joseph requires some contemplation of his life and example.

Being engaged to Mary was probably a safe, peaceful, and hopeful period in the life of the holy older man whose betrothal to the holy younger woman was suddenly upended when she announced to him her pregnancy, and that it was God’s baby. Such obvious infidelity compounded by blasphemy could have merited Mary death, but Joseph chose to divorce her quietly, that was until things really became interesting.

20 He had made up his mind to do this when suddenly the angel of the Lord appeared to him in a dream and said, ‘Joseph son of David, do not be afraid to take Mary home as your wife, because she has conceived what is in her by the Holy Spirit.
21 She will give birth to a son and you must name him Jesus, because he is the one who is to save his people from their sins.’
22 Now all this took place to fulfil what the Lord had spoken through the prophet:
23 Look! the virgin is with child and will give birth to a son whom they will call Immanuel, a name which means ‘God-is-with-us’.
24 When Joseph woke up he did what the angel of the Lord had told him to do: he took his wife to his home;
25 he had not had intercourse with her when she gave birth to a son; and he named him Jesus.

If that weren’t enough, there would be the shepherds coming after the birth and describing the great Theophany, when Heaven opened and the Angels sang. There would be the Magi who journeyed quite a distance bearing their great treasures for this newborn King.

And then there was Herod.

Another dream with an angelic message, and the flight into Egypt to avoid the wholesale slaughter of the innocents. As the scriptures note, there was no intercourse. Joseph was Mary’s chaste spouse through it all, and a fearless adoptive father to her child.

That’s virtue, and an example for our time.

Joseph was called upon to make extraordinary sacrifices in his life in order to ensure the unfolding of God’s plan. If tradition that holds Joseph to have been an older widower is true, his plans for uneventful domesticity with a holy young woman were shattered. As the father of an autistic child, who was on a very different trajectory professionally until our Joseph was given five major diagnoses, I can relate to Saint Joseph.

Our life with our son Joseph has reordered my priorities in ways unimaginable. From seeming tragedy emerges hope, and hope is realized in triumphs great and small. In the 11 years since his diagnoses, I thought that I was the one who was in the lead, and indeed I have been through orchestrating and executing Joseph’s therapeutic regimen. In a larger sense, it is Joseph who has been the one leading as his autism has been the portal into the new eugenics claiming countless lives of handicapped children through abortion.

But there is a price to be paid for that transformation. It requires death to self, in much the same manner as the successful parenting of typical children. The nuclear fuel for the eugenic engine is the misperception on the part of parents, and the outright lie told by obstetricians and genetic counselors, that life with the child will be a living hell for all concerned, that the parents will lose themselves, their identities, their futures, in the needs of this child.

In truth, the problem of the past thirty years is that all too many parents are unwilling to spend themselves for their children’s health, education, and welfare.

Joseph did all that he had to do to secure the safety of his adopted son, including leaving the promised land and returning to the land of his people’s former slavery. He left his business, his friends, family, neighbors, and took the young woman who became pregnant apart from Joseph’s embrace; so Joseph also left behind his good name.

Some might be tempted to suggest that Joseph’s was an extraordinary case, as he was instructed by angels in dreams. A good counter would be to suggest that we don’t need angelic visions when we have the Dei Verbum which spells it out for us.

Joseph is the model of masculine virtue for all fathers. Perhaps we don’t read much about him in scripture because those virtues are supposed to be ordinary. We men plead all sorts of romantic-sounding promises when we court our wives. Jimmy Stewart lassoing the moon for Donna Reed in It’s a Wonderful Life.

Today it’s considered heroic virtue to keep the child of our marital embrace if it is less than perfect, if that child will make demands on our time and resources. Regina and I aren’t heroic for embracing Joseph in all of his frailty and doing all within our power to lift him up. That’s just our job, the fulfillment of vows we made to accept children willingly and lovingly from God, and to raise them in the faith.

We need to contemplate the life of Joseph, the ordinary virtues he lived that today make him seem superhuman. We need to offer our lives as witnesses to the power of God’s grace to take the weaknesses of our children in stride, and to make them part of the ordinariness of our day-to-day lives. We need to make people understand that authentic freedom consists in having the ability to do what we must, and not what we want. It’s the only escape from the narcissism and hedonism that have overtaken and enslaved so many, and which fuel the growing eugenic wildfire.

I took his name for Confirmation, in no small measure because of the great example of my grandfather, Joseph, who was the living embodiment of Mary’s husband; and gave it to the baby boy who has led me to a place I resisted going for decades before his birth. It is the place we must all work to bring our nation before the eugenic fire overtakes us all.