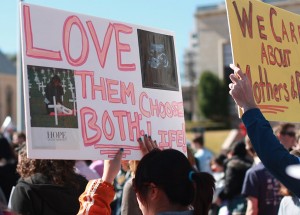 Over the years the supporters of abortion have used a variety of adjectives to describe those of us who work to ensure equal protection for every human being from creation to death.

For example, when Walk for Life West Coast sponsored an exhibition including placement of signs that read “Abortion Hurts Women” the Silver Ribbon Campaign to Trust Women demanded that San Francisco mayor, Ed Lee, forcibly remove them. In a letter sent to the mayor, the activist group called the signs “false and hateful.” Ironically, the same pro-abortion group had previously sponsored its own event during which it exercised its freedom of speech. Yet, apparently the organization does not believe that pro-life Americans can exercise those same rights.

But we cannot deny that abortion does hurt women. We hear time and again of tragic stories where this is true. In fact, the intense pain abortion causes can lead women to take their own lives, as in the case of Australian television personality Charlotte Dawson, whose recent suicide is reported to have been associated with an abortion she had several years prior to her death. According to the Daily Telegraph, “Friends believe she had never really gotten over her marriage to [Olympic swimmer, Scott] Miller, which ended in divorce after only a year. In her tell-all autobiography Air Kiss And Tell, she revealed she had an abortion because the pregnancy would interfere with Miller’s preparation for the 2000 Olympics—and blamed that for the start of her long battle with depression.”

Pro-life people are frequently described by our opposition as being “intolerant.” This is an accusation we should take great pride in. As G. K. Chesterton opined in his day, “Tolerance is the virtue of a man without convictions.”

Christians are called to be intolerant, to imitate Christ who showed His intolerance of the moneychangers in the temple. No principled pro-life person would tolerate acts of abortion, contraception, in vitro fertilization, or euthanasia. We reject any act that assaults the dignity of the innocent human being. But this also means that we do not treat the people perpetrating such acts with intolerance. By exposing the acts for what they are and what they do to others, we are actually performing acts of charity toward those who oppose us.

When a person embraces the entirety of the pro-life message, he lives it to the greatest extent possible. That is probably what the student or students at Allegheny College were doing when they distributed pro-life flyers to college professors, slipping them under the doors of various offices. The campus newspaper reported, “Such actions were not merely insensitive but actively dangerous to campus, according to the administration.”

Dangerous? The campus leadership will not release the contents of the paper in question, but this event inspired Townhall’s Christine Rousselle to write, “If the content of the flyer isn’t ‘threatening,’ then the action cannot possibly be construed as such. Something is majorly fishy about this story and Allegheny College’s reaction.”

Finally, we come to an example of the sort of uncharitable, hateful, intolerant act that negatively affected an Olympic hopeful. Skeleton skater Megan Jones missed the Olympics because she had been using the birth control device NuvaRing. Less than two weeks after she began using it, she developed breathing problems. After several visits to doctors and getting no explanation of what was happening to her body, Jones finally received the diagnosis: She had blood clots forming in both of her lungs—one of the potential side effects of NuvaRing.

While Jones says that her doctor warned her of the risks and that she ignored the risks because she felt she was healthy enough, the truth is that pharmaceutical companies purveying such devices and chemicals have been in denial for years. The income generated by the birth control industry appears to be much more important than educating the public and withdrawing such dangerous products from the market altogether.

Isn’t it time we insisted that it is the foundational philosophy of the culture of death that is actually uncharitable, hateful, and intolerant?

The truth will set them free.