Trending Now
You are at:Home»Learn & Live the Faith»Evangelization»It’s the Kerygma, Stupid
By Sharon Serratore on September 7, 2016 Evangelization, Featured 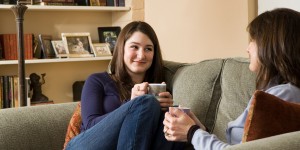 Kerygma [ku-RIG-muh]: preaching of the gospel of Christ, especially in the way of the early church.

That’s me. I’m the stupid one.  I might also add fumbling, unprepared, tongue-tied and more, but mostly I was stupid.  Indeed I knew better, that evening years ago, seated at the town-square café with Petra, my first friend in this my new home in post-communist Eastern Europe.

Over our kaffes Americhanka and amid the warm buzz of returning students and renewed acquaintances, Petra posed an unforgettable question that arrested me then and convicts me still:

Now many years removed from that evening, I remain tremendously grateful for that conversation and for Petra’s earnest question. I’m not grateful for my lame answers though, which included ramblings and abstractions about ‘truth’ and ‘faith’ and ‘the church.’  It must have sounded so murky and meaningless to her, these vague concepts.  And dull.  Stupid me.

The response she deserved was the kerygma, that essential proclamation about Jesus:  who He was, what He did and why, and it’s meaning for you and me.  This simple telling has triumphed in advancing Christ’s Kingdom for centuries. Though deeply known and rooted within me, at the time of Petra’s questioning I was unprepared and dumbfounded by the sheer, stunning novelty of her asking.  What person would ask such a question?

Outside of some primitive peoples, hadn’t most every modern, literate, current person – believer and non-believer alike – gathered somehow some inkling of the story of Jesus’ resurrection?  Who wouldn’t have learned, heard, or just absorbed, whether formally, culturally or socially, somehow the Christian salvation story?

Funny too, it struck me, that Petra’s wondering intimated that she knew a bit of the story of Christ, just not “that part” that followed the crucifixion.  How strange to hear the Resurrection and the promise of salvation history described in that way, as “that part” of the story!  We followers of Christ know better:  that is no part of the story.  That is the story.

Now some twenty years later, the world is different and changing.  I regularly encounter people like Petra. I recognize that I can’t presume that the story of Jesus Christ is part of the larger narrative of our culture or our times.  Our bishops have instructed that we are living in post-Christendom, not unlike that time at the start of the church.  In Proposition 8 of the bishop’s 2012 General Assembly report on the New Evangelization, they tell that we are now “in a situation similar to that of the first Christians” and that “we should see this both as a challenge and a possibility.”

Not bleak or downbeat, but “a challenge and a possibility.”  Let’s recognize the promise and encouragement in those words.  We live in a time wanting for evangelization, with new circumstances and relationships barren of the truth of Jesus Christ.  While it shouldn’t surprise us when we meet others unfamiliar with the Lord, (baptized or unbaptized), we can approach these occasions as moments for evangelizing, mindful that people are not opportunities.

The truth about Jesus Christ will be fresh to ears that haven’t heard it, and dynamic to those who are either lost or may be losing their way.  What’s sure is this:  we are responsible for the telling.  We are responsible for sowing the seed. Though we may not manage where that seed will take root, or if it is welcomed or hostilely met, we need equip ourselves powerfully with the kerygma at the ready.

That kerygma – that first proclamation of Jesus Christ – will overwhelm and entrust the person to the Lord, so said St. John Paul II in the 1979 document Catechesi Tradendae.  Catechesis and teaching on doctrine can follow, but first the simple truth of Jesus must be proclaimed.  Once accepted in faith, that truth can only compel a person’s life.

“So, what happened after Jesus died? . . . I never heard that part.”  Tell the kerygma.  Practice it.  Be specific:  Who was Jesus?  What did he do and why?  What does that mean for me?

This article was previously published at Catholic365.com.