Trending Now
You are at:Home»Featured»It’s When We Look Back That We See the Blessings
By Michele Marie on June 1, 2012 Featured, Live in Christ, Women 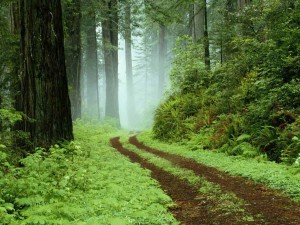 Thirty-plus years ago, during my first semester of college, I found out that my student loans didn’t come through due to a glitch in the paper work. I dropped out of college and joined the army. To be honest, at the time I wasn’t a serious student. Nevertheless, I thought that by dropping out I was more or less a failure. Little did I know that what seemed at the time to be a major setback would instead be the catalyst that would change the course of my life and of my faith for the better.

I went to Alabama for basic training. At one point I trained for 5 days in the middle of an Alabama forest. There the military staff would often kill snakes they found near our tents. Half dollar-sized spider-like creatures seemed to fly across the floor of that southern forest as we trained. It rained day and night, non-stop, but being sopping wet was something no one complained about because everyone was wet. I got sick. I ignored the all-night coughing spells and warm clammy feeling that alternated with chills over the next several weeks. One day, as I stood for morning roll call, I turned my head and it felt as if a wave of water had just sloshed back and forth inside my skull. I turned my head back and it seemed to slosh once again. I got in the sick-call line. My drill sergeant came over and told me under his breath, “Don’t go on sick call.” He was trying to warn me that I would regret my decision- that I would have to start training all over again. I prayed, ‘God, please help me through this.”

I already knew that I’d be ‘recycled.’ ‘Recycled’ was the word we used to describe someone who had made it to a certain point in basic training, then went to sick call and had to begin basic training all over again at some other site for missing one or more training events. Many times I’d witnessed fellow soldiers being escorted to a new training company, sometimes after missing just one hour of training. We avoided sick call at all costs. Again, I felt that I had failed. Little did I know that I was about to witness a miracle.

At sick call I was found to have a fever of 103 and a respiratory infection. It was standard practice that basic trainees were immediately hospitalized with any fever. I thought it was the end of basic training in that company for me. However, it turned out that God would use this to show me He was in charge! When I came back 4 days later from the hospital, life seemed surreal. No one mentioned my four days away, and no one was packing my bags and escorting me to my new training company.

I finally approached my drill sergeant and asked, “I’m going to be recycled, right?” My drill sergeant actually smiled! He told me something odd had happened. As it turned out, immediately after I’d gone to sick call, our sergeants had received a notice from Headquarters telling them that our soldiers would be needed to test and try out the fancy new firing range that was being built nearby. All official training would be postponed. For four days they used our soldiers to test and re-test the new firing range.

When I came back, official training started back up again. I hadn’t missed a single training event! I wasn’t recycled. Coincidence? I’d prayed only for the patience to be able to bear with being recycled. I hadn’t counted on God taking it a step further and preventing my having to begin all over again. It was during basic training that I first had the sense that God was a loving and caring father. Later, it was the remembrances of God’s little favors and of his manifesting his love and care in so many various little ways during basic training that gave me the confidence to return to him later after a period of straying from my faith.

In the army, I met people I will never forget. I learned what a Boilermaker was in Germany (and enjoyed more than a few!). I ate Schnitzel mit case und champignon which translates from German to ‘pork-meat thing that hides its fatty chewy side by being overcooked and slathered with cheese and mushrooms’. It was delicious! I skied on the Zugspitze, the highest mountain in Germany. I explored the ruins of the Heidelberg Castle, and toured through the beautiful Neuschwanstein Castle. Had I known, when I’d first found out about the college loans falling through, that I’d have so many new experiences, adventures, and receive expert training, I would have ran from college to the army! I still thank God for my time in the army!

It was while I was in Germany that I discovered I wrote poetry. As a combat military police officer, I worked 24 hour shifts: 24 hours on, then 24 hours off. Though I was usually designated a tower guard, every few days I was scheduled for the front entry gate. We called it Post 3. It was there at Post 3, during the long nights, that I discovered the blank side of documents just waiting for me to fill them with all the soldier angst and life ponderings that welled up in me. These were quickly-written rough first drafts, not polished poems. They were all about soldiers and the soldier’s life. In time some fellow soldiers discovered them. Word got around and my fellow soldiers took nearly all my poems. Carefully they would detach the stapled page, then fold it so that it would fit into a pocket. (During inspections we were docked points due to missing pages on the documents at the Post 3 gate.) One sergeant told me I had a gift for writing.

Fast forward to three years later: life as I knew it was ending. I thought I was making a bad decision. I was stationed in Fort Leavenworth, Kansas working as a road patrol. I’d just passed the Sergeant Board and was told I would be promoted to the rank of sergeant. But I was six weeks away from the end of my three year active duty term. They wanted me to re-enlist before they would give me my promotion. However I was burnt out, done, had had enough of my soldiering days. I didn’t have the stomach or the nerves to re-enlist. Why couldn’t I just force myself to do what I thought was the right thing to do? As I took the Greyhound bus home, I kicked myself for not completing 20 years in the military and thereby insuring myself a small retirement for life. That would have been the practical thing to do. Surely I’d regret my decision! What would I do with my life without the military? I wondered. ‘Please God, show me what to do,’ I prayed.

Five months later I was back in college. While there, I realized that my military training had given me the discipline and maturity I needed to become a serious student. I lived at a below poverty-level income. Out of this I paid for my room, board, tuition, books, and transportation. On my income I could not afford to live in the dorms. I lived in a rough neighborhood where I rented a flat with two other roommates for 89 dollars a month each. It was cheap but not always a safe place to live. I frequently ate jelly sandwiches for meals — not having money for anything else. I was very content. After three years in the military I knew that being able to further my education was a major privilege. It seemed almost easy compared to my long 80+ hour work weeks in the military. And what ever happened to those student loans? I managed to graduate without obtaining any student loans at all! Another great blessing to me — God had had a better plan for me than I could have imagined!

So often when we think we’ve failed at life, or life throws us a major curve ball, or what I thought in my case was a major catastrophe, often it is a new beginning. So many seeming setbacks have turned out to be times where fate was re-setting my course and adding little adventures and experiences to my life. I’ve learned that though life is often a mystery, there is a purpose and meaning in the many little setbacks, happenings, and stories that we experience. We just need to have a little faith.