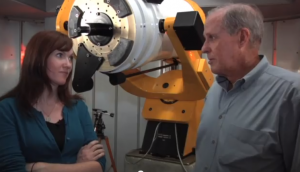 While Jen found it a little bit awkward to tell you about this new mini-series of hers, I’m tickled pink to tell you why I think you’ll love the series. She gave me a little sneak preview since we both engage with atheists and we both are converts. We have other things in common: We both are fascinated by science, we both have a lot of little kids, and we both have a fondness for Texas. She lives there, I grew up there. She hates the scorpions that invade her house; I hate the spiders that compete for mine.

Anyway, here are three things (in true Jennifer Fulwiler bullet point style) that I think you’ll like — no love! — about her mini-series ‘Minor Revisions.’ These are things that I did not expect, pleasant surprises.

1.  There are pictures of her as a little girl. I love those kind of pictures. Like so many people, when I read Jen’s blog, Conversion Diaries, and when I read her commentary on current events and other things at National Catholic Register, I connect with her personally. I understand her, I am pulled in by her perspective and pushed to think about it more deeply. I sometimes feel as though I might call her up and invite her for coffee until I remember that we live about 1,750 miles apart. Seeing pictures of the young Jen Fulwiler, the bright young atheist who wasn’t afraid to ask questions and read about new things, and who seems to have always had a keyboard at her fingertips, gave me a fuller appreciation for who she is. Childhood pictures are so endearing.

2. You get to meet her husband! I’ve only really seen him in the short clips on Jen’s blog dressed in a banana suit, but he is very handsome in his business suit sitting at his lawyer-ly desk. Joe talks about the early days of conversion and how the young family set out to find a church, narrowing it down to the “richest church in Austin” or the “prettiest church in Austin.” I cracked up watching Jen watch him as he talked about it. He did all this research to find a few churches, and after Jen attended them, she walked out and said, “No.” I can so relate! My poor husband could probably share a laugh or two with Mr. Fulwiler. Jen may be the only person in the world who posed more questions to her husband than I did during the conversion process. Every answer revealed a million more questions. If you were touched by Jen and Joe’s “Five Years Later” story, one of the most popular posts on her blog, you’ll enjoy the segment where they talk about their conversion together.

3. I have long been curious about Jen’s father. I know he is atheist, and that he raised Jen as an atheist. It’s obvious in her stories that she is extremely fond of him and all that he taught her. (As an aside, he served as a Special Forces HALO instructor, a training my husband also completed, and something I cannot imagine ever doing.) I have often wondered if the relationship was strained because Jen converted, but then I realized that it probably is not because Jen is so honest and humble. After I got over my self-righteous back-patting and found a little humility, I realized that my conversion taught me to appreciate my non-Catholic family members more for all the right and true foundations they embrace. Her father is clearly a man of integrity, honor, and intelligence, such admirable virtues for anyone to hope to attain, and seeing them together was beautiful thing.

In the first episode of Minor Revisions, Jen has a mini-debate with her father about religion, faith, astronomy, the Big Bang, and what kind of evidence he would need to know God exists. They have it in front of a telescope in an observatory. (You’ll have to watch to find out why they were there.) While the conversation was frank, it is a good example to everyone that you can have these discussions and still care about each other. How ecumenical.

Pope Paul VI said in his 1964 encyclical on unity and the Church that our dialogue should respect the dignity of other people. We should never use even the slightest bit of coercion to evangelize, just as Christ and His Apostles never used coercion and let the persuasive power of truth speak for itself.

Our dialogue must be accompanied by that meekness which Christ bade us learn from Himself: “Learn of me, for I am meek and humble of heart.” It would indeed be a disgrace if our dialogue were marked by arrogance, the use of bared words or offensive bitterness. What gives it its authority is the fact that it affirms the truth, shares with others the gifts of charity, is itself an example of virtue, avoids peremptory language, makes no demands. It is peaceful, has no use for extreme methods, is patient under contradiction and inclines towards generosity. (Ecclesiam Suam, 81)

After a healthy debate on issues that can often leave people angry with each other, they hugged, and concluded an enjoyable outing together. Something her father said about Jen really stuck with me though, and I want to point it out so that you watch for it. Although he does not share her beliefs, her father said that he is proud of Jen for her commitment and sincerity in her Catholic faith. “She’s not being a ‘just-in-case’ Christian,” he said, “she’s into it 100%.” Jen and her family do not go to church “just in case” there’s a God and they might have to answer for it; they go because it is the center of their lives. What a good reminder that how we live speaks more loudly than what we say.

If you watch the first episode tonight, I would love to hear your thoughts. Blessings, Jen, to you and your family. Thanks for sharing your lives with us!

Minor Revisions is a three-part special that will air on December 13, December 20, and January 10, all at 8 PM EST (7 PM CST). It starts tonight, and you can watch it online live here. It will also air on the NET network in the NYC area (TimeWarner Ch 97 & Cablevision Ch 30), and it will be available as an on-demand show for Verizon FiOS subscribers. Though there may be reruns, it won’t be archived online, so be sure to catch it live! More info here. Here is the trailer.