Trending Now
You are at:Home»Learn & Live the Faith»Catechesis»Jesus and the Dead Gorilla in the Looking Glass
By Dr. Gerard Nadal on June 1, 2016 Catechesis, Featured, Live in Christ 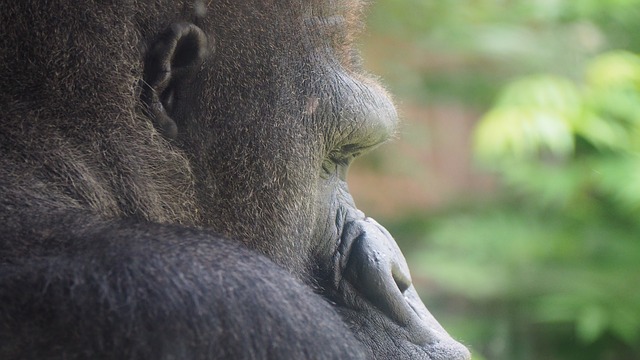 Two radically different strains of Americans emerged over the weekend in response to the Cincinnati Zoo killing a gorilla in order to save the life of a four year-old boy who tumbled into his enclosure. After viewing videos of the gorilla dragging the boy haplessly through the water at great speed, and climbing with the child, some people cannot imagine why a decision to kill the animal was made. Others cannot fathom where the first group comes from.

It all depends on one’s definition of endangered animal.

There were two in that enclosure.

Enter the debate over which endangered animal gets priority. If one goes strictly according to the numbers, then the life of the child was expendable. Many outraged animal rights activists commented on the seven billion people on the planet and the disappearing gorilla population. In their perspective, zoological justice needed to be balanced on the back of a toddler.

To the rest of the world, such a perspective is utterly unfathomable. In truth, both sides find the other’s repellent. But the Cincinnati Zoo episode is merely a looking glass into the broader anthropological meltdown that has been underway for the better part of a century.

The Catholic Church has a 2,000 year history of refining an authentic anthropology based upon God’s revelation to us regarding who and what we are in the created order. St. Paul tells us in the first chapter of his letter to the Colossians:

13He has delivered us from the dominion of darkness and transferred us to the kingdom of his beloved Son,
14in whom we have redemption, the forgiveness of sins.
15He is the image of the invisible God, the first-born of all creation;
16for in him all things were created, in heaven and on earth, visible and invisible, whether thrones or dominions or principalities or authorities–all things were created through him and for him.
17He is before all things, and in him all things hold together.
18He is the head of the body, the church; he is the beginning, the first-born from the dead, that in everything he might be pre-eminent.
19For in him all the fulness of God was pleased to dwell,
20and through him to reconcile to himself all things, whether on earth or in heaven, making peace by the blood of his cross.
21And you, who once were estranged and hostile in mind, doing evil deeds,
22he has now reconciled in his body of flesh by his death, in order to present you holy and blameless and irreproachable before him,
23 provided that you continue in the faith, stable and steadfast, not shifting from the hope of the gospel which you heard, which has been preached to every creature under heaven, and of which I, Paul, became a minister.

They key to understanding here is the observation by Paul that, “In Him, all things hold together.”

Every stunning departure from the moral norms that have governed decent human behavior can be traced to errors in Christian anthropology, and to a rejection of Christ’s sovereignty over our lives. When we collectively look in the mirror, what is it that we see? What is it that we are not seeing, and why?

Consider the breathtaking devaluation of human dignity through the eugenics movement, two world wars, communism/socialism, unrestrained capitalism, segregation, global abortions since 1960 passing the 2 billion mark, contraception, sterilization, surrogate motherhood, IVF, cloning of human/animal chimeras, euthanasia and physicians committing outright murder, the LGBT agenda that now is pressing for no distinctions between men and women, and on and on…

There is nothing sudden about the radical anthropological disintegration all about us. It has been a century in the making. St. Paul was right. In Him all things hold together, but the opposite is also necessarily true.

Apart from Him, all things disintegrate.

Our dignity comes from God Himself, which is why it isn’t enough to merely be, “spiritual,” as is the fashion. One must be religious and faithful to a body of moral teaching because our human dignity needs to be safeguarded, and those safeguards make behavioral demands on us, often in the realm of personal sacrifice. It was this mess that Pope John Paul II saw clearly and set out to address in what would become one of the most incredible canons ever contributed by a single individual in the Church.

In his first Encyclical, Redemptor Hominis, John Paul addresses humanity’s self-perception issue, and offers the remedy to the distorted self-understanding in one paragraph:

Man cannot live without love. He remains a being that is incomprehensible for himself, his life is senseless, if love is not revealed to him, if he does not encounter love, if he does not experience it and make it his own, if he does not participate intimately in it. This, as has already been said, is why Christ the Redeemer “fully reveals man to himself”. If we may use the expression, this is the human dimension of the mystery of the Redemption. In this dimension man finds again the greatness, dignity and value that belong to his humanity. In the mystery of the Redemption man becomes newly “expressed” and, in a way, is newly created. He is newly created! “There is neither Jew nor Greek, there is neither slave nor free, there is neither male nor female; for you are all one in Christ Jesus”64. The man who wishes to understand himself thoroughly-and not just in accordance with immediate, partial, often superficial, and even illusory standards and measures of his being-he must with his unrest, uncertainty and even his weakness and sinfulness, with his life and death, draw near to Christ. He must, so to speak, enter into him with all his own self, he must “appropriate” and assimilate the whole of the reality of the Incarnation and Redemption in order to find himself. If this profound process takes place within him, he then bears fruit not only of adoration of God but also of deep wonder at himself. How precious must man be in the eyes of the Creator, if he “gained so great a Redeemer”65, and if God “gave his only Son “in order that man “should not perish but have eternal life”66.

So there is the remedy for a broken world. Christ the Redeemer fully reveals man to himself.

So many among us look in the mirror each day and see a visage of something far less human, or wondrous, or noble, or lovable than what actually stands before the mirror. This weekend the dignity of a human child was judged to be less than that of an adult gorilla, and by so many people that it became a national debate on the very weekend meant to honor the sacrifices made by humans for other humans.

It’s what happens when Christian faith, and its attendant anthropology, is chased from the public square. The civilization that held together in Christ disintegrates. It is past time for the Christian churches of this nation to reassert our primacy of place in the public square, and to bring the good news to those who look in the mirror with shame.

Civilization hangs in the balance.