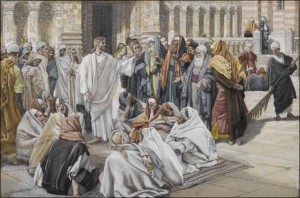 “Most theologians talk too much. They should pick up a broom and sweep the room. That says enough.” – Mother Teresa

After reading today’s Gospel Readings, I could not help but think of Mother Teresa and this quote.  To understand why, one would have to imagine that he is in the presence of Jesus and that he has just witnessed Jesus literally free a soul from the grasp of the Devil. Everyone is in awe and reverence, right?  Instead, we hear “it is through Beelzebul, the prince of devils that he drives devils out.”

Then Cardinal Ratzinger had written volumes on the Liturgy, and in his memoirs he penned this:

“The second great event at the beginning of my years in Regensburg was the publication of the Missal of Paul VI, which was accompanied by the almost total prohibition, after a transitional phase of only half a year, of using the missal we had had until then. I welcomed the fact that now we had a binding liturgical text after a period of experimentation that had often deformed the liturgy. But I was dismayed by the prohibition of the old missal, since nothing of the sort had ever happened in the entire history of the liturgy. The impression was even given that what was happening was quite normal. The previous missal had been created by Pius V in 1570 in connection with the Council of Trent; and so it was quite normal that, after four hundred years and a new council, a new pope would present us with a new missal. But the historical truth of the matter is different. Pius V had simply ordered a reworking of the Missale Romanum then being used, which is the normal thing as history develops over the course of centuries. “ Memoirs 1927-1977 Ignatius Press

As a theologian, father of Vatican II, Bishop, Cardinal, Prefect and finally Pope, Benedict had a mission:  to be put in a position to sweep.  So sweep he did. First, by encouraging the re-translation of the English translations of the Mass, and then by issuing the Motu Proprio Summorum Pontificum ending  almost all restrictions of the Mass codified by St. Pius V. Then, he cleverly branded them under the names Ordinary and Extraordinary Form.  Finally, the Church can be united in the liturgy whether in Latin or English.  We can all be happy.

Then the theologians spoke:

David Gibson, author of a book on the pope’s battles with modernism, The Rule of Benedict, predicted the change “will not have a great impact in the pews beyond creating more problems for an already overworked priesthood.” And went on to say “”If the church is all about unity, what this does is set up a two-tier system, two kinds of rites and two ways to be Catholic. This move could be seen as a ‘correction’ on the liturgical front but it’s really an ideological move, a way to reinterpret Vatican II by a pope more interested in purity than popularity.””

The pope, in his letter accompanying the documents released Saturday, rejected the notion that the Masses are different ceremonies. “Rather, it is a matter of a twofold use of one and the same rite” and that wider use of both rites will enrich each and promote “interior reconciliation in the heart of the Church.”

For the remaining days of Lent, perhaps we need to reflect on today’s readings, and discover the unsavory ways that we might be participating in the “war” of the two Liturgies.  If we discover that we are, perhaps it would be wise for us to shut up, grab a broom, and sweep.