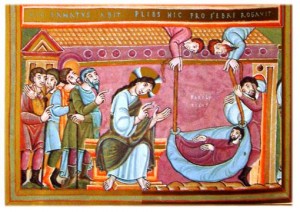 The Gospels recount Jesus’s healing of a paralytic who is lowered through the roof of a house. Initially, Jesus tells the man “Your sins are forgiven.”

This upsets some scribes and Pharisees who ask themselves, “Who is this man who blasphemes and forgives sins?”

But Jesus, knowing their thoughts, said, “Why do you think evil in your hearts?  For which is easier, to say, ‘Your sins are forgiven you,’ or to say, ‘Arise and walk?’ But that you may know that the Son of Man has power on earth to forgive sins”–he said to the paralytic, “Arise, take up your bed, and go to your house.”  And he arose and departed to his house.  Now when the multitudes saw it, they marveled and glorified God, who had given such power to men.  (Matthew 9:4-8)

Today when someone asks “Who is this Jesus?” Jesus is not present in the same way and He does not perform an awesome miracle to help them answer their question.  It is conceivable that God gives such a questioner the gifts of understanding and faith and, in response to these gifts alone, the person receives and knows the answer.  But God also uses other persons to help answer this question and to show who Jesus is.

The ones God employs to let people know who this Jesus is do not usually perform  miracles. They can, however, do “mini-miracles” –  things that bring such a questioner to marvel, to be amazed, and to be filled with awe at someone’s selflessness. It leads to the answer that Jesus is God, the God who made them and who loves them, and who wants them with Him for all eternity.

There are numerous examples of someone performing an act that is full-of-awe that says who this Jesus is.  St. Maximilian Kolbe’s “Take me” when a fellow prisoner at Auschwitz was chosen as one of ten prisoners to be starved to death is one example. It is the ultimate lay-down-one’s-life-for one’s friend act. It told those who witnessed it “This is who Jesus is.” The previously-selected prisoner,  Franciszek Gajowniczek,  had cried out, “My wife! My children!” when Fr. Kolbe volunteered to take his place. Even now, people are amazed at what Kolbe did – and that amazement leads them to Jesus.

Total self-sacrifice like the saint’s can speak loudly about who Jesus is, but even mundane actions can provide evangelizing awe.  Mother Teresa entered a bakery to ask the baker for bread for orphans at one of her orphanages.  The baker spat in her open hand.  She closed her hand and said “This is for me, now do you have bread for my orphans?” The baker was stunned – his very physical insult had been received as if it was a caress.  He became the orphanage’s bread supplier. A simple closing of her hand and request for her orphans had amazing effects.

John McCain, Vietnam War POW, recounted a story about a fellow prisoner. McCain dropped his sandal into the hole that served as his latrine. He was in no condition to get it out.  Capt. Ronald G. Bliss (R.I.P.)  went in, got the sandal, and cleaned it off for McCain. To McCain, this action of Ron’s was one of the most amazing Christ-like things he had ever seen.

Sometimes a few words can be filled with “Jesus awe.”  Once as I was keeping vigil outside the last abortion business in Corpus Christi, Texas (now closed, thanks be to God!), an Army Infantry veteran was kneeling in prayer when a man and woman pulled up in a pick-up. The woman got out and went inside. Before she entered, the kneeling man said “I am praying for you.”

The man in the truck started to drive away, but after he had gone a few yards, stopped the truck in the middle of the street. He got out, enraged and cursing, heading for the man praying. Rising from his knees, the veteran, in an instant, thought of his options. He imagined how he could lay this guy out right there. He thought how he could defend the others there who were peacefully witnessing for life. Realizing where he was and what he was doing, he knew he had to stand there without retaliating and let this guy punch him out. He had to turn both cheeks.

Just as the angry man took his arm back for the first blow, the praying man put his arms at his sides and said simply “God loves you, God bless you,”  as he waited to be hit. The charging man stopped inches away, shook his head and shoulders, put his fists down, and stared at his would-be victim in amazement. He turned without saying a word, and walked away. Only a few words had been said, but  they were words of care and love. Perhaps this is what Jesus would have said.

Except in the Eucharist, Jesus is not here in the flesh to perform miracles to show people who He is. But we are here. Any small act of love, any simple act of kindness, a caring word, and any generosity shown to others can have the effect of a mini-miracle.  In our “me-me-me” culture today any selfless act can be the source of amazement which says “This is Jesus.”