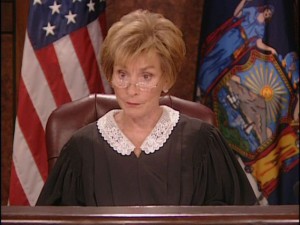 It’s true, my tastes are a bit odd. I’ll admit to that.

In fact, there are only three television shows I watch regularly—The Journey Home on EWTN, in which Marcus Grodi interviews converts to the Catholic Faith; Phineas and Ferb, a Disney Channel cartoon and the only TV show in history to feature a secret agent platypus; andJudge Judy.

For starters, she has a very keen and intelligent mind. Though the cases she arbitrates are sometimes ridiculous, she nevertheless studies the briefs ahead of time and analyses both the character of the litigants as well as the issues before her. She has enough experience to know when someone’s blowing smoke at her, and she always—always—tells it like it is.

But what on earth does Judge Judy have to do with Distributism?

Distributism is an economic theory that advocates the broadest allocation of ownership—ownership of property and capital—so that the greatest number of people are free to determine their own economic fate; Distributism says that the economy is made for man, not man for the economy; that subsidiarity is a principle that serves the family (the building block of society) and that makes for personal and social sanity; Distributism opposes the errors of capitalism and the errors of socialism both; it opposes both slavery to corporations and slavery to the state; it affirms the dignity of man and seeks to make man’s activity in the marketplace a virtuous thing.

Well, for starters, Judge Judy herself is a quite stunning example of what happens when a person owns his or her own capital. Early on in her television career, Judy took a firm stance in negotiations with her producer.  She demanded a tremendous amount of money, and got it.  She understood that she was the show and the show was she.

Of course there’s always the sticker shock audiences get when hearing about celebrities demanding and receiving huge amounts of money. Baseball since free agency is a prime example of that. And I’m not arguing that a reported salary (in Judy’s case, according to Forbes) of $45 million per year is an example of “small is beautiful”, but it is certainly an example of the power that ownership of capital entails.

Judy knows that she is in a very strong position to negotiate, for she is not a cog in a machine, not a mere employee, not a wage slave, but the owner of the capital (in her case talent, intelligence, personality) that makes her product valuable.

Compare, by contrast, most of the litigants on her show.

They are, almost every single one of them, working the system. They are economically disenfranchised, usually by their own bad habits and lack of effort. They are either on “disability”, perpetual welfare, apparently endless “unemployment”, or engaged in the activities of the underground market, selling drugs or working tax-free for cash while continuing to receive some sort of government subsidy. There are apparently dozens of ways to scam the government, from divorcing your spouse while still living with her so that the state will pay a portion of the child support order you welch out on (one of my actors did this); or by getting the state to pay you to take care of your own family members once they’re declared officially disabled (many of Judy’s litigants do this).

In a world where the bulk of earnings are tied not to activities that produce something of value, but to government insured speculation (see Wall Street and the crooks who work that system), fraud (see the abundance of white collar crimes, the pyramid scheme structure of much of our economy, the mismanagement of fiat currency and the banking system, the housing bubble, the student loan bubble, etc.) or usury (a fancy word for getting something for nothing and the pain this causes the victim), then why would the bottom feeders not model their approach after those on top, those who skim upon the waves?

Take the example of a sales person we once hired. He was supposed to work from home making outgoing calls, generating leads and closing them.

He ended up doing nothing. Simply nothing. (Well, he was drawing a paycheck, and that’s something.)

When we finally realized that no matter what we tried to do to motivate him to sell, he would simply sit on his butt and watch daytime TV (like Judge Judy), we fired him.

He then proceeded to draw every last drop of benefits the state paid him for not working (including subsidized COBRA insurance) until he was forced to get a real job outside the home. He knew exactly when the teat would run dry, and he waited until precisely that moment before he actually began doing productive work. For all I know he has since been let go from that job and has started the cycle all over again.

So whether you like Judge Judy or not, whether she rubs you the wrong way or you admire her pluck and honesty, whether you think she’s worth the nearly one million dollars per week that she gets paid, you must admit, that the show is an object lesson in what is wrong with our society.

If the litigants on that show could rise above the system and take command at the very least of the intangible capital they do possess (whatever talents and skills and brains the Lord has given them), they could—even in a rigged economy—do productive work and make an impact—like the lady in the black robe and frilly lace collar who judges them and who commands the audience she does by bluntly telling the truth.