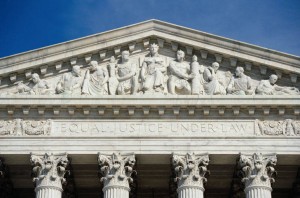 Last week, President Obama made news when he suggested that it would be “unprecedented” for the Supreme Court to declare unconstitutional a law passed by a “strong majority of a democratically elected Congress.”  His comments were prompted by the less than favorable reaction of the Supreme Court during oral arguments on the constitutionality of his crowning achievement, the Affordable Care Act, a.k.a Obamacare.

It is no small irony that this most liberal of Presidents is howling like a cut dog about the possibility that “judicial activists” may upend his healthcare plan.  Liberals have historically favored an activist judiciary because they liked the social agenda that was being advanced by activist judges.  Conservatives, on the other hand, have complained bitterly that liberals were advancing their agenda through the courts, bypassing the people’s elected representatives in the legislative branch.  Now it appears that Mr. Obama fears the shoe may soon be on the other foot, and already he is complaining that he doesn’t like the fit

Judicial activism occurs when judges look to their own views and values to shape the outcome of a case, rather than allowing the laws as promulgated by elected legislators or as affirmed by the people in their state or federal constitutions to dictate the final result.  Often, the words of those documents are given meanings other than those originally intended by their drafters because the documents are deemed to be “living” and constantly “evolving.”  As participants in this “evolutionary process”, judges make law from the bench rather than take the law as it comes to them from the people or their elected representatives.  The result is that America’s principle of representative government is undermined and the people wind up being governed by judicial despots rather than their elected representatives.

Judicial activism is a very efficient way to advance a social agenda.  It is precisely for this reason that its effects are so pernicious.  In the Supreme Court, for example, one needs only to secure five out of nine votes to make new law.  On some appellate panels, one need only secure two out of three votes in order to prevail.  Compare these numbers to the challenge of securing a majority in the 435 member House of Representatives or the 100 member Senate.  It’s no wonder that social engineers prefer to use the courts to make policy rather than the Congress!  And whether it emanates from the left or the right, judicial activism’s corrosive effect on the democratic process is equally bad.  The solution is not for conservatives to replace the Left’s judicial activists with their own, but to eschew judicial activism wherever it may be found.

Sadly, in the over 200 years since our federal Constitution was first adopted, Americans have become woefully ignorant of its provisions.  Therefore, because we don’t know our Constitution we tend to accept at face value what judges have to say about its requirements.  In order to stem the tide of judicial activism the American people must be more accurately informed about what the Constitution says and what it means.  And we should insist that its requirements be scrupulously followed.  This also means electing constitutionally literate legislators and executives who know what the Constitution requires and who have the moxy, as members of co-equal branches of government, to push back against judges who misrepresent its requirements.

“[T]he candid citizen must confess that if the policy of the Government upon vital questions affecting the whole people is to be irrevocably fixed by decisions of the Supreme Court, the instant they are made in ordinary litigation between parties in personal actions the people will have ceased to be their own rulers, having to that extent practically resigned their Government into the hands of that eminent tribunal.”

Lincoln understood that the Court’s decision might be binding on the parties in the cases at issue, but was unwilling to surrender policy making in our constitutional republic to a small group of judicial oligarchs who wanted to advance their own agenda at the expense of the democratic process.  Thomas Jefferson shared Lincoln’s views and did not hesitate to push back when he felt the Court overstepped its bounds.  He was dismissive of the notion that the Supreme Court was the ultimate arbiter of all things constitutional and refused to cede his own view of the Constitution to that of the Court.

Judges, no less so than other mere mortals, are subject to human frailty and error.  They too can have their judgment muddled by ambition, avarice, and error.  They too are capable of exceeding the bounds or misinterpreting the requirements of the Constitution.  And while the Supreme Court may be the supreme judicial body, it is not the supreme branch of government – a fact it needs to be regularly reminded of by the other branches.

Americans and their elected representatives need to wake up and reclaim the constitutional ground that has been lost to an imperial judiciary or risk forfeiting the legacy of freedom bequeathed to us by our forefathers.  And we must not only learn the Constitution, we must live by it, insisting that others, including our judges, do likewise.