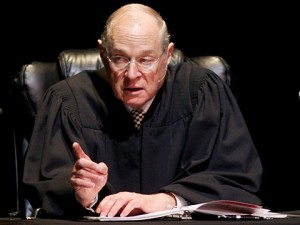 In the limits of this brief essay I cannot adequately address the Defense of Marriage Act (DOMA), or the entirety of the Supreme Court’s recent decision regarding the same. As a native Virginian, however, I must fully disclose that, insofar as the ruling was an effort to preserve the rights of individual states to regulate marriage as they wish, I would have sympathy with the reasoning, and would be willing to hear it out on that narrow ground. But there are several sections of Justice Anthony Kennedy’s reasoning that I regard as unusually problematic, and that is the highly subjective language he employs in the majority opinion.

For starters, Kennedy stated: “The principal purpose [of DOMA]is to impose inequality, not for other reasons like governmental efficiency…. By this dynamic DOMA undermines both the public and private significance of state-sanctioned same-sex marriages; for it tells those couples, and all the world, that their otherwise valid marriages are unworthy of federal recognition. This places same-sex couples in an unstable position of being in a second-tier marriage. The differentiation demeans the couple, whose moral and sexual choices the Constitution protects … and whose relationship the State has sought to dignify. And it humiliates tens of thousands of children now being raised by same-sex couples. The law in question makes it even more difficult for the children to understand the integrity and closeness of their own family and its concord with other families in their community and in their daily lives.”

I see at least four problems with this particular Kennedy statement:

First, by a biological/reproductive understanding of marriage, such unions are in fact in the “second-tier;” they are “bottom-tier.” If we ranked sexual unions in terms of their likelihood to reproduce other humans, would not the male/female union be in the “first tier,” and all others be “second tier?”

While our populist and egalitarian sensibilities may not like such language (and perhaps Justice Kennedy was therefore engaging in a little rhetoric here), the fact is that, insofar as reproduction serves the extension of the human race, the male-female union is indeed more valuable. Insofar as the federal and state governments desire tax-paying citizens to exist in the future, the union of a man and a woman is the “first tier” way to get there.

Second, this language of “demeans” (and “humiliates” in the next sentence) is high on rhetoric and low on reason. Nearly every public policy/legislative issue addresses/resolves some competing interests, whether capital/labor, corn/wheat, new industry/old industry, etc. If making any differentiation between such competing claims necessarily “demeans” or “humiliates” the party decided against, then all public policy would be wrong, since all policy makes such differentiation. Congress decides to subsidize corn at a higher rate than wheat; this differentiates perceived respective value to the country and therefore “demeans” and “humiliates” wheat (and those who grow it).

Third, why should Kennedy’s statement about “concord with” become a judicial principle? In a pluralist, freedom-protecting culture, most of us differ in some regards from others whom we choose to have less “concord with.” Such language also blurs into the kind of subjectivity of “demean” and “humiliate” that ought to have little or no role in judicial reasoning.

Fourth, Justice Kennedy has apparently forgotten about being a child; at his and my age, I suppose he and I can be pardoned for so doing. However, I cannot believe his claim that children cannot “understand the integrity and closeness of their own family” unless the federal government recognizes the union. Many/most of us may well have been teenagers before we even raised questions about comity between the states (or between the states and the federal government) regarding the recognition of marital unions. What made us understand the integrity and closeness of our family was the familial love we experienced. We did not wait for a Supreme Court decision to determine whether our parents loved us. There must be many children of “common law” unions who also enjoy integrity and closeness without any recognition of the marriage by either state or federal government.

Those are just a few of my objections to that one particular Kennedy statement. Unfortunately, Justice Kennedy gave me additional reasons to disagree with his opinion. Among them, Kennedy further stated: “Under DOMA, same-sex married couples have their lives burdened, by reason of government decree, in visible and public ways. By its great reach, DOMA touches many aspects of married and family life, from the mundane to the profound….. It forces them to follow a complicated procedure to file their state and federal taxes jointly…. It prohibits them from being buried together in veterans’ cemeteries.”

I believe Justice Kennedy threw part of this is in for comedic effect. If he has ever prepared taxes, he knows that we all follow a “complicated procedure to file…state and federal taxes jointly.” The entire Internal Revenue Service code would need to be rewritten if “complicated procedure” were unconstitutional.

Finally, one more Kennedy statement is worthy of dissection here.

Said Justice Kennedy: “The federal statute is invalid, for no legitimate purpose overcomes the purpose and effect to disparage and to injure those whom the State, by its marriage laws, sought to protect in personhood and dignity. By seeking to displace this protection and treating those persons as living in marriages less respected than others, the federal statute is in violation of the Fifth Amendment.”

I couldn’t disagree more strongly. I will simply allow the Fifth Amendment to speak for itself here, in its entirety, since I can find nothing in it that is at all germane to the question of federal recognition of marital unions of any sort. Read it for yourself: “No person shall be held to answer for a capital, or otherwise infamous crime, unless on a presentment or indictment of a grand jury, except in cases arising in the land or naval forces, or in the militia, when in actual service in time of war or public danger; nor shall any person be subject for the same offense to be twice put in jeopardy of life or limb; nor shall be compelled in any criminal case to be a witness against himself, nor be deprived of life, liberty, or property, without due process of law; nor shall private property be taken for public use, without just compensation.”

Had Justice Kennedy intended to address DOMA exclusively in terms of the relative rights of states and federal government to regulate marriage, I probably would have been persuaded. Already, the differing states treat differently the question of who may officiate at weddings: in some states, all clergymen are ex officio justices of the peace; in other locales, such clergymen must make application just as non-clerical justices of the peace do. But introducing the emotional, subjective, and pejorative language of “demeaning,” “humiliate,” and “second tier” to issues of judicial review is beneath his dignity as a sitting justice, and merely contributes to what James Davison Hunter calls the “politics of ressentiment.” Such language, rather than grounding an opinion in such reasoning as all reasonable people can concur in, reduces politics to class struggle, hatred, and enmity. A reasonable heterosexual should be able to say to his reasonable homosexual friends that he regards a sexual union that reproduces other humans to be more valuable to the common good than a sexual union that does not; there is nothing demeaning or humiliating about making such a statement, and Justice Anthony Kennedy rends the already-strained social fabric by asserting that it is.

Dr. T. David Gordon is a professor of religion and Greek at Grove City College and a contributing scholar with The Center for Vision & Values.