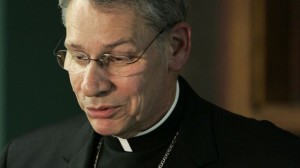 Thanks to media, American Catholics will soon be treated to another sad chapter in the story of clergy sex abuse. In fact, that may already have happened. Without little advance notice, the trial of Bishop Robert W. Finn of Kansas City, Mo., for supposedly not moving fast enough to tell authorities about a troubled priest was shifted from an original starting date of September 24 to September 5, with an early decision by the trial judge expected.

In case you wonder, it gives me no pleasure to write about these things. I do so now because I believe it’s better to be forewarned than to be taken by surprise. In outline, then, the unhappy tale we’ll soon be hearing told and re-told goes essentially like this.

Although there had been rumbles earlier about possible trouble involving a Kansas City pastor, Father Shawn Ratigan, it was only in December, 2010 that Bishop Finn, the local ordinary, learned that disturbing photographs of young children had been found on the priest’s laptop computer.

With his secret discovered, Father Ratigan on December 17 attempted suicide by shutting himself in the garage with the engine of his motorcycle running. Bishop Finn sent him out of state for psychiatric evaluation and, upon his return, assigned him to a sisters’ convent as a kind of chaplain, with strict orders to stay away from kids.

Despite that warning, the priest was seen at public events involving children. Based on this new information, Bishop Finn notified the authorities, and the police arrested him on May 19. Next day, the bishop went to Father Ratigan’s former parish. There, in a grueling session with parishioners, he said, “I should have done differently in this regard, and I’m sorry.”

In federal court last month, Father Ratigan entered a guilty plea to five child pornography counts.  As this is written, he’s awaiting sentencing, with several other lawsuits against him pending.

Because of those five months, December to May, before reporting the priest, Bishop Finn and the Kansas City diocese are charged with failure to meet the notification requirements of the law.

This Kansas City case is very different from that of Msgr. William Lynn, former secretary for clergy in the Philadelphia archdiocese, who last July 23 was sentenced to three to six years in prison on a single count of child endangerment for his role in giving new parish assignments to abusive priests. An appeal of the decision is said to be likely. Monsignor Lynn is currently the highest ranking Church official in the United States to be tried for an abuse-related offense. As of September 24, Bishop Finn will claim that dubious distinction.

So what are concerned Catholics to make of all this? Here is a partial, preliminary, tentative answer.

Ten years ago, responding to a barrage of disclosures of abuse and cover-up, the U.S. bishops overwhelmingly adopted a policy of what was called zero tolerance for abusive priests. That policy was subsequently approved by the Holy See. Evidently. Zero tolerance is also the policy now in place in the American legal system—at least, where the Catholic clergy are  concerned.

From the point of view of a non-lawyer, Bishop Finn’s mistake seems to have been hoping Father Ratigan might be rehabilitated if given a second chance. Under “zero tolerance,” it appears, Church authorities aren’t allowed to make that mistake.

There was a time when the Church handled human problems like Ratigan on its own. That time passed, largely because, instead of handling problems, religious authorities sometimes swept them under the rug. But its passing also has human costs, as the news from Kansas City will soon be reminding us.