Trending Now
You are at:Home»Featured»KC Star Omits Story on Top Episcopal Bishop
By Bill Donohue on November 9, 2011 Featured, On Media 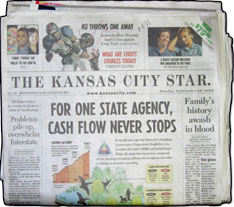 [On Monday], the Survivors Network of Those Abused by Priests (SNAP) held a press conference in front of the Catholic Cathedral of the Immaculate Conception in the Diocese of Kansas City-St. Joseph to bring attention to a case involving an Episcopal priest, Bede Parry, who is being charged with molesting young boys while he was studying to be a Catholic priest. Parry was thrown out of the Benedictines of Conception Abbey in Missouri back in 1990; then he left for Las Vegas; eventually he became an Episcopal priest there. The person who knew about his record of abuse and still allowed him to join the clergy of the Episcopal Church was the Episcopal Bishop of Nevada, Katharine Jefferts Schori; today she is the Presiding Bishop of the Episcopal Church of the U.S., located in New York City

The Kansas City Star, which has been relentless in its pursuit of clergy abuse by Catholic priests, said absolutely nothing about this case today. Is this because it involves another religion? Or is it because it implicates a woman clergyperson, thus getting in the way of the contrived narrative that Catholic bishops have some kind of special “old boy” network that inhibits them from being forthcoming? No matter, to think that the person who is the head of the Episcopal Church in the U.S. is named in a cover up involving the sexual abuse of minors—and isn’t even mentioned in the Star—speaks volumes about its politically driven agenda against Diocese of Kansas City-St. Joseph Bishop Robert Finn.

Then there is the politics of SNAP. Can anyone believe that SNAP would hold a press conference in front of a Jewish synagogue about a case involving the sexual abuse of a minor committed by a minister? So why did it pick the most prominent Catholic cathedral in the Diocese for its press conference, especially when the issue has nothing to do with the Diocese? (Parry was never a priest there—he was an order priest.)