Trending Now
You are at:Home»Featured»Keeping the Lepanto Spirit
By Marge Fenelon on October 6, 2011 Featured, Live in Christ 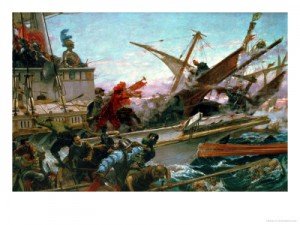 The feast of Our Lady of the Rosary – celebrated by the Church on October 7 – is my favorite Marian feast day in the liturgical year.  The reason for this has less to do with my love of the Rosary than my intrigue over the Battle of Lepanto.

Perhaps you remember that the Battle of Lepanto was fought on October 7, 1571 between the Turkish fleet and Catholic naval forces primarily from Spain, Venice, and Genoa under command of Don Juan of Austria. In this last battle of oar-driven ships, the meager Christian force defeated – against all rational odds – the Moslem force, which was the most powerful navy in the world.

How was this done? It was done through the power of the Rosary! St. Pope Pius V, then the holy pontiff, knew that the Christian forces were at a serious disadvantage, materially speaking, and so he called for all of Europe to pray the Rosary for victory. They got it. Not only that, but also the victory was a decisive one, preventing the Islamic invasion of Europe. It’s said that, although St. Pope Pius V was at the Vatican hundreds of miles away from the battle, he suddenly received the conviction that the battle had been won. He rose from his seat during a meeting, went to the window and radiantly exclaimed, “The Christian fleet is victorious!” and shed tears of thanksgiving to God.

The Christian fleet is victorious! Those words have rung in my head ever since I first read them umpteen years ago. My heart zings when I imagine ships filled with big burly sailors battling it out on the open seas, flags snapping on the masts, cannons booming, guns firing, fires blazing, knuckles white, nerves steadied, sweat trickling down the brows. My spine tingles at the exceptional maneuvers, the ingenious tactics, the exceptional courage, and the unexpected results of the battle. But what gets me most is the fact that the real power behind this astounding naval victory was our very own Blessed Mother Mary.

Whenever I face an apparently unbeatable foe, I grab my Rosary and tell myself, this is a Lepanto moment! Just having those beads in hand makes me feel as though the victory already has begun. I imagine myself at the bow, wind blowing in my face and the ravages of a sea battle around me. At the center of it all is our Blessed Mother, with all the power the heavenly Father has given her to achieve the victory. Whether it’s a mere skirmish of trying to get through a rotten day, the seemingly insurmountable battle of family discord, or the all-out war of a loved one with terminal illness, I’ve got my beads at the ready. I may not have exceptional maneuvers, ingenious tactics, or exceptional courage, but I have the privilege of invoking Mary’s help in achieving the victory. Whether I pray with clarity and determination, or simply rote-recite the prayers in numb desperation, I know she’s listening, accepting my plea, and taking the upper hand for me in the conflict. If I surrender all to her, she will be victorious no matter what the odds.

Granted, I have a pretty active imagination, but the point is that we can and should keep the Lepanto spirit throughout the year, not just on the feast of Our Lady of the Rosary.

The Church has always attributed particular efficacy to this prayer, entrusting to the Rosary, to its choral recitation and to its constant practice, the most difficult problems. At times when Christianity itself seemed under threat, its deliverance was attributed to the power of this prayer, and Our Lady of the Rosary was acclaimed as the one whose intercession brought salvation” — Blessed Pope John Paul II, Apostolic letter on the Holy Rosary, ROSARIUM VIRGINIS MARIAE.

We all have seemingly unbeatable foes; they come in many forms and from many directions. Sometimes we can feel as though they’re coming from all directions! Regardless, we have recourse to defeat them, perhaps not as in a physical battle, but in the battle of our hearts that often arise when we’re seeking to understand and accept God’s will. The battles in our lives may not be decided according to the way we want them to be, but they will be decided according to the way God knows they must be and against all rational odds. By entrusting them to the Blessed Mother in confidence, we allow her to work in and through us in unimaginable ways.  When we put her at the bow, she’ll use the power given her by the heavenly Father to achieve the victory. Then we’ll be keeping the Lepanto spirit.