Researchers who justify the killing of human beings at the embryonic stage “demean” themselves and diminish their own humanity, an American ethicist told LifeSiteNews.com at the Vatican’s stem cell conference last month.

By willingly participating in an evil, even to bring about a great good like cures for diseases, “You demean yourself, you make yourself less of a full human being,” said Dominican priest Nicanor Pier Giorgio Austriaco.

“The image of God that is in you begins to get soiled because of your choices,” he said. “Every choice you make either makes you a saint or a sinner. Evil acts will always make you less of a human being than you could be.”

The conference, “Regenerative Medicine: A Fundamental Shift in Science & Culture,” was jointly sponsored by the US biotechnology company NeoStem and the Vatican’s Pontifical Council for Culture. Some pro-life advocates have criticized the conference for failing to focus on the ethical dangers involved in stem cell research.

The conference’s only talk specifically on ethics came from Fr. Austriaco, an American Dominican priest and moral theologian who is also a molecular biologist.

In his brief talk, Fr. Austriaco, who is also an associate professor of molecular microbiology and genetics at Providence College, Rhode Island, spoke on ethics in general terms, clarifying “how a Catholic citizen would avoid, limit and distance himself from the evils committed in a pluralistic society.” Catholic teaching, he said, offers a “moral framework” to help deal with “cooperation with present and future evil” and to judge clearly whether it is permissible to benefit from evils committed by others in the past.

Using the example of scientific data acquired by human experimentation in Nazi concentration camps, he explained that even after the fact, moral people want to have nothing to do with evils that have been committed in the past. “Scientists will not touch that data,” he said. “We don’t touch it. We don’t reference it. We act as if it didn’t exist.” 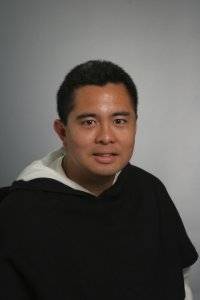 In an interview, Fr. Austriaco said that most people in science are simply not trained to think in moral terms, but make their decisions based entirely on pragmatic considerations. Most scientists, he said, have an image of ethics as an obscure branch of academic philosophy that does not concern them.

In fact, he said, ethics is a daily concern for everyone. He said he wanted to demonstrate that the Catholic Church’s teaching, presented in the media as arbitrary and irrational, actually provides a practical moral framework that can help ordinary people to make rational, moral decisions.

“Buying products manufactured in unjust sweatshops in Mexico; receiving an organ transplant obtained from a murder victim or an executed prisoner, issues that are particularly pressing in countries like China; receiving a foetal tissue transplant from an aborted child, prescribing drugs derived from the exploitation of the poor,” are ethical issues facing people, for which the Catholic Church offers a clear answer, he said.

He warned that over time, deliberate and knowing participation even in this kind of “remote” evil can result in the “deformation of character.” A person profiting, even at a distant remove, from the exploitation of sweatshop workers, for example, could eventually “decide that sweatshops aren’t that bad”. This, he said, can lead additionally to the person participating in the deforming of another’s character, “Someone who respects you will be convinced that sweatshops aren’t that bad.”

Benefiting from past evils, such as the use of cell lines derived from embryos, “may be allowed” if it is “material cooperation,” that is, indirect involvement in the original act, and is sufficiently removed from “proximity to the evil that had been perpetrated.” But for such a benefit to be moral it cannot lead to future evil acts or lead others to do evil, and must have “a reasonably proportionate” motive, he explained.

We are obliged to consider the possible consequences to the social order, he said: “If Catholic families started availing themselves of technologies derived from the destruction of human embryos, it would be used not only socially but politically as a wedge to try to promote a particular agenda.”

After his talk, Fr. Austriaco told LifeSiteNews.com that most researchers are never presented with even these basic, first-year undergraduate ethics concepts, and that their own ethics have been derived from their motivation to advance science.

“When they go take an ethics class in a secular university, they’re presented with … it’s not utilitarian, but a smorgasbord. You can be Kantian, Utilitarian, and they say, ‘Oh well, it’s so confusing I’ll just do what I want to do which is to do stuff that is good for people’.”

Most researchers, he said, “are purely utilitarian when it comes to ethics. So, they would justify anything because they can say to themselves, ‘Twenty years from now I’m going to discover a cure that’s going to save a billion people. So I don’t mind if I make shortcuts here. What’s an embryo or two, especially if it’s a discarded embryo’.”

Regarding the question of whether pro-life people can use stem cell therapies, he said that the question is whether the benefit derived is sufficiently distant from the original evil.

“Something many people don’t realize,” he said, is that the cell lines developed from human embryos, “are the foundation for every drug you take today. So anyone who’s concerned, I say, ‘Well have you taken an aspirin that was mass produced?

“That technology was used to generate all the techniques we use today to grow cells.”

“The analogy I usually give is, all the streets here in Rome were made by slaves. Now, do we have problems driving on them and walking on them two thousand years later? No. At some point you have to draw a line.”

Fr. Austriaco gave four criteria for finding where to draw that line. “There has to be material appropriation,” he said, meaning that we cannot have the intention of participating in the evil act done in the past. “Second, you have to avoid leading to future evil acts. Third, you have to minimize scandal,” meaning avoid leading others to evil acts, “and fourth, there has to be a proportionate reason.”

Defending the conference from criticism, Fr. Austriaco said, “The Church has to engage. We cannot be scared. What we’re simply saying is that we’re inviting someone to come to give a talk on nothing that has anything to do with the ethics. He was invited here to talk about the science.”