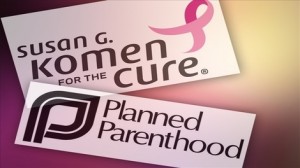 As far as I can tell, the real story at the center of this week’s Susan G. Komen Race for the Cure Foundation / Planned Parenthood debacle is not that Komen cut off Planned Parenthood from existing funding. (They didn’t. Existing grants were to be honored for over a year.)

The real story, it seems to me, is the swiftness and ruthlessness of the Culture of Death Left backlash against Komen.

John Podhoretz coined the phrase “liberal blacklist” to describe Komen’s instant non grata status this week (HT for this and much of what follows: Rod Dreher). It’s too soft a phrase.

I’m sure Komen executives expected to take some heat in the media for their decision. They probably weren’t anticipating that the American Association of University Women would immediately bar Komen from approved community service opportunities for college women at the AAUW’s annual leadership conference.

That’s right: As far as the AAUW is concerned, volunteering to raise money to help fight breast cancer for an organization with a 30-year history of doing just that doesn’t count as “community service” unless Komen also supports Planned Parenthood. Fighting breast cancer isn’t enough. You have to fund America’s largest abortion provider.

Likewise, Komen founder Nancy Brinker probably wasn’t expecting to find her long career of public service called into question by institutions like the Yale School of Public Health, which told WaPo journalist Sarah Kliff that its commencement speech invitation to Brinker was “under careful review.”

Consider: In 2009, President Obama, despite a clear history of outspoken abortion advocacy and in the face of outspoken opposition from dozens of bishops, was allowed to give the commencement address at Notre Dame, and even received an honorary degree. By contrast, Komen hasn’t even criticized or spoken out against Planned Parenthood or abortion in any way, let alone given aid or comfort to the pro-life enemy. Nevertheless, the slight to Planned Parenthood was so grave that its founder was instantly grey-listed, if not outright blacklisted. It’s like one side knows there’s a war on and the other side doesn’t.

Also from Kliff’s Twitter feed, I discover that the company Honest Tea announced on Facebook that despite its “strong supporter of cancer education and research,” it was “in the process of evaluating our 2012 partnerships, including reviewing the recent changes to Susan G. Komen’s policies.”

A few good things have come from this mess. Now at least many more people will be aware that Komen supports Planned Parenthood. (It’s also worth remembering, as a friend pointed out online, that Komen spends up to seven figures every year suing smaller charities that have the temerity to be “for the cure”—and their CEO makes half a million a year. In his words, “as long as the CEO of a ‘charity’ makes many times my annual salary, they don’t need any of my money.”)

And it’s been a moment of clarity for everyone about how ruthless the pro-death forces are, and how sacred abortion and its largest American purveyor are. I can’t do better than to quote Rod Dreher:

[Planned Parenthood and its supporters] could have denounced Komen’s decision, but in light of all Komen has done, and still does for women, turned their ire on the Republicans, the Religious Right, and so forth. But no, Komen broke ranks, and it must be dealt with harshly. And the sympathetic mainstream media is helping them do the job. All this reminds one of exactly what we’re dealing with here: what John Paul II called the culture of death. It is helpful to be reminded which side you’re on.

What do you think?

This article courtesy of the National Catholic Register.