Trending Now
You are at:Home»Columnists»Learning About the Revised Roman Missal
By Ebeth Weidner on June 12, 2011 Columnists, Featured 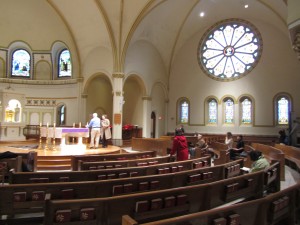 Recently, I took an online course on the Revised Roman Missal, the use of which will be introduced on November 27th (the first Sunday of Advent and the new calendar year for the Church).  During the five-week course of study, about a dozen of us students discussed our thoughts about the present state of the Mass and the attitudes of the pew-sitters.  All the comments were not negative, we have some parishes that are busting with great catechetical programs and good leadership energizing their parishes.  On the other hand, there are those with less effort, if any.  Regardless, all are facing some important changes come November.  Like it or not, these changes have been promulgated, passing the Holy See’s snuff along with three committees and expert exegetes.

The process the Roman Missal went through was no small feat with no small concern for the believers in America’s Catholic Church.  I nearly got dizzy reading the scrutiny the liturgical prayers underwent.  These revisions were studied, compared, shared with other Christian community leaders (since many of these denominations use our Roman Missals as well) for their input — an ecumenical relationship that never seems to reach the pew sitters of these churches.  After the many months and years of research, deliberation, consideration, study, and voting; then going back through the process with the committees reviewing and making sure all agreed with the revisions and rationale. I was so impressed with this process and I firmly believe that this is the right and perfect way.  At a time when so many of our parishioners have gone dormant, the time for a renewal and revitalization is now.

The entire Church in the United States has been blessed with this opportunity to deepen its understanding of the Sacred Liturgy, and to appreciate its meaning and importance in our lives

As for our preparation:

Now is the time to seize the opportunity given to us for all Catholics in the United States to deepen, nurture, and celebrate our faith through the renewal of our worship and the celebration of the Sacred Liturgy.

The timeline of this process has been made available to us on the USCCB Roman Missal page, but I thought I’d streamline it for those with little time to go researching.  Briefly, here is a portion of the events in the process of these third revisions:

In 1963, Sacrosanctum Concilium (Constitution of Sacred Liturgy) was promulgated as the first official text of the Second Vatican Council, calling for the renewal of the liturgy and the reform of the liturgical books in order to promote the “full, conscious, and active participation” of the faithful in the liturgy of the Church.  The use of the vernacular was allowed in all liturgies leading up to the Roman Missal.

In 1964, Pope Paul VI issues Motu Proprio letter, Sacram Liturgiam; the Consilium is formed. To facilitate the implementation of the reform of the Liturgy

“[I]t seems evident that many prescriptions of the Constitution cannot be applied in a short period of time, especially since some rites must first be revised and new liturgical books prepared. In order that this work may be carried out with the necessary wisdom and prudence, we are establishing a special commission whose principal task will be to implement in the best possible way the prescriptions of the Constitution on Sacred Liturgy itself.”

March 27, 1975:  Missale Romanum was reissued promulgated by Pope Paul VI. Only one year after the publication of the U.S. edition of the Roman Missal, the Holy See issued a revised authoritative Latin edition, the “second typical edition,” containing additional prayers and modifications of existing prayers and rubrics.

April 10, 2000: Missale Romanum,  promulgated by Pope John Paul II. Pope John Paul II issued the “third typical edition” of the Roman Missal during the Jubilee Year 2000. The Institutio Generalis Missalis Romani (General Instruction of the Roman Missal) had been published in March, 2000 as an introduction to the revised Missal. The ritual text would not be published until March, 2002. Once the full text of the Missale Romanum was available, the work of translating it into various languages would begin.

November 17, 2009: Final segments of the Roman Missal (third edition) approved by the U.S. Bishops.
Concluding a lengthy process that began with the publication of the Missale Romanum, editio typica tertia in 2002, the United States Conference of Catholic Bishops gives its approval to the final sections of the English translation of the third edition of the Roman Missal. (Other sections were approved in November 2008 and June 2009.) While the Holy See prepared and approved a final text, expected sometime in 2010, a remote catechetical period was underway to prepare clergy and lay faithful in the United States to receive the new translation.

So you see, nothing happens quickly and without thought, prayer, and process in the Catholic Church. The search for a deeper more authentic translation to Latin comes to us for our benefit and spiritual growth designed to bring us to a renewed appreciation of the Paschal sacrifice of Christ — His saving Passion, death, Resurrection, and Ascension.

Open your hearts to these new and well worked out prayers.

[Please see Catholic Lane’s resources on Preparing the Way for the Roman Missal giving detailed explanations of every part of the Revised Roman Missal.]