Trending Now
You are at:Home»Featured»Lies, Damned Lies, and Statistics: Sheep Leading Themselves to the Slaughter
By Theodore Kobernick on October 27, 2011 Featured, The Economy 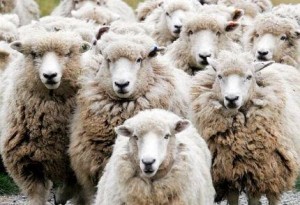 Recently I encountered the inane phrase “redistribution of wealth.”  We all know that it refers to the evil plan of the left-wingers.  But wait!  Are we unaware that the redistribution of wealth has already occurred, and continues today?  Don’t we know that the wealth in the United States is distributed more unevenly than ever before in our history?  It’s the RICH who have all the wealth, not the persons on food stamps.  If you don’t believe that the moneymen continue to grab all the wealth (with no small help from the government), get yourself a book on ancient history: there you will learn that in the forgotten past, at the end of the Bush administration and the start of the Obama administration, the government gave how much? – one trillion, two trillion dollars – to the biggest banks.

I cannot believe that many of the Catholic Lane readers or contributors are huge recipients of the massive wealth redistribution.  Why then do we use the propaganda phrase of the very wealthy?  Why lead ourselves to the slaughter? This leads to the title topic …

The phrase is attributed to Great Britain’s Prime Minister Benjamin Disraeli, but was popularized by the American curmudgeon Mark Twain.

The so-called statistic we keep reading and hearing is “one percent [or whatever number the writer likes to use]of the people pay 60% [again, pick a number] of the taxes and only about 49 percent pay any taxes at all.”

The wide variation in the numbers makes me think this not really a statistic at all.  But if it is a real statistic, it is a lie in that it does not take into account the percentage of income pulled in by this generous and overloaded 1% who carry the rest of us on their weary backs.  It might be a meaningful statistic if it went something like this (Don’t quote the numbers pulled from my hat): “Two percent of Americans receive sixty percent of the income and pay sixty percent of the income taxes.”

But that still does not deal with the lie that fifty-one percent of us pay no taxes at all.  Almost all of us pay sales taxes.  Property taxes are paid by homeowners, landlords, and the tenants who pay the rent that supports these taxes.  In Washington State there is no sales tax on food.  So we buy a sack of potatoes.  The price of the potatoes includes the wages and taxes of everyone involved in potatoes: farmers, farm workers, truck drivers, freight handlers, grocery store employees, and all the support persons such as mechanics, CPA’s, lawyers, advertising media for the market, etc.  So if you want to become part of the mythic 51% who pay no taxes, you will just have to quit eating potatoes – or bread, or broccoli, or anything at all.  You will have to move out of your house or apartment.  Oh, yes, did I forget the fuel taxes?  Quit driving a car or riding a bus, and again, never buy any product which is transported by truck.

Please quit using this MISLEADING “statistic,” and when someone else uses it, tell them it’s nonsense.  Or if you don’t want to offend them, tell them that someone wrote an article somewhere, saying it was nonsense.

I am neither a liberal nor a conservative on the matter of taxes!

Big government wants to get as much of our money as it can – preferably all of it.  You already know that the Federal government has little if any concern for using money either prudently or humanely.  And you know that the feds are trampling on Catholic values.  By now you should also know that Big Money is interested only in getting more of our money, and converting that money into power.

We need the government, and we need the banking system – in the same way that earlier societies needed fire: you need them, but you must not let them take control and proceed to slash and destroy.

Let’s return to a consideration of the implications of the statistical propaganda piece.  This propaganda is used to support the claim that the wealthy are already taxed too highly, and should by no means be taxed at higher rates.  This position was embodied in the Bush tax cuts for the wealthy, and in the Obama extension of the same (which they love to blame on the Republicans – who were not in charge for the extension).  The current maximum tax rate is 35%, for income above $378,150 annually.  You may have noticed that we are not prospering nowadays.

I was a child when Eisenhower was elected President.  The eight Eisenhower years were a time of prosperity.  If you are interested you can verify this.  During Eisenhower’s administration the highest marginal tax rate was a whopping 91%.  During the years between 1950 and 1980, the highest marginal tax rate averaged a little more than 70%.  Again, these were years during which we prospered: we were the most powerful nation in the world, we were the richest, we were the largest creditor nation.

Of course taxes were not the whole story.  We were the most powerful industrial nation.  We did not have the political policy so euphemistically titled, “Free Trade,” to close our factories and to send our jobs off to China, Thailand and other third world countries.

There is a lot of room for differing opinions on things like taxation.  However, that does not mean there is room for falsehood and misleading – especially not for Christian writers writing for Catholic readers.  We do well to keep in mind Jesus’ judgment of liars.

You belong to your father, the devil, and you want to carry out your father’s desire. He was a murderer from the beginning, not holding to the truth, for there is no truth in him. When he lies, he speaks his native language, for he is a liar and the father of lies.  John 8:44

And here is Jesus’ testimony in Revelation

I am Alpha and Omega, the beginning and the end, the first and the last.
Blessed are they that do his commandments, that they may have right to the tree of life, and may enter in through the gates into the city.
For without are dogs and sorcerers, and whoremongers, and murderers, and idolaters, and whosoever loveth and maketh a lie.   Revelation 22:13-15

It would be unfair to urge you to argue from knowledge without pointing you in the direction of at least a couple of sources of good information, one of them right here in Catholic Lane.

Brooks Adams, The Law of Civilization and Decay, first printed about 1896.  It’s a sweeping history of the Western world focusing on money, centralization and creativity.* Adams shows things that happened again and again in the past, which we can see happening now, today.  I especially appreciate that there’s no way this 115-year-old book is intended as propaganda for today’s struggles.  Unfortunately, Brooks Adams does not respect Christianity – either Roman Catholic or Protestant.  But, as I was once advised, “Eat the chicken and spit out the bones.”

Catholic Lane contributor John Médaille is superb in his treatment of economic matters.  His September 16, 2011 article, featured in The Economy, is one I think we should all read.  His writing is dense, but the article is not long, and is well worth the effort.  Médaille provides a wonderful, balanced alternative to the ultra-capitalist and ultra-‘progressive’ articles that abound.

Did I really call Mark Twain a curmudgeon?  Please excuse me; I have to go look in a mirror.

*  I got a good price from ABE Books (internet) for the 1975 Gordon Press edition.