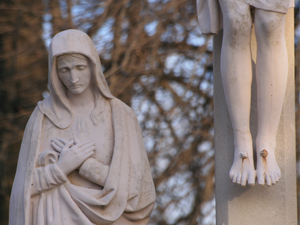 Perhaps you’ve visited the popular weblog of the inimitable Fr. Z (AKA Fr. John Zuhlsdorf at WDTPRS.com) where one of his trademark battle cries is, “Save the liturgy, save the world!” If you haven’t, I highly recommend it.

“If you throw a stone, even a pebble, into a pool it produces ripples which expand to its edge. The way we celebrate Mass must create spiritual ripples in the Church and the world,” Fr. Zuhlsdorf writes, making the point that our liturgical practices have a truly universal impact; whether positive or negative.

With this in mind it occurs to me that if one examines the history and the fruit of the post-conciliar reform of the Roman Rite, the liturgy’s impact on the way Catholics view the gay “marriage” issue can be brought into focus.

Post hoc ergo propter hoc? No, it certainly isn’t a matter of simple “cause and effect,” but follow me here and then draw your own conclusions.

Polling data published by the Pew Research Center in October 2010 claims that 42% of Americans support gay “marriage,” while an even greater percentage of self-identified Catholics (46%) responded likewise. More noteworthy still is that the percentage of those who so reject Church teaching on the sanctity of marriage remains remarkably high (34%) even among weekly Mass-goers!

Though the gay “marriage” movement is a relatively recent one, it’s difficult to imagine more than one-in-three Catholic Mass-goers rejecting any such foundational doctrine of the Faith back in 1963; the year the process of liturgical reform was formally set in motion with the promulgation of the Vatican II document Sacrosanctum Concilium.

So, how did we get here? Let’s begin by looking back to the year 1969 and the inception of the “gay rights movement” at the inaugural event often cited by its proponents; the “Stonewall Riots” during which homosexuals clashed with police in Greenwich Village over a period of three days beginning on June 28th. It was an unprecedented uprising against secular authority for the gay community; setting the tone for decades to come.

Less than 90 days earlier, on April 3rd, Pope Paul VI had issued the Apostolic Constitution, Missale Romanum, with high hopes that the promulgation of the Novus Ordo Missae (now known as the “Ordinary Form of the Roman Rite”) would put an end to the challenges being leveled against the Church’s liturgical authority and all of the experimentation that came with it throughout much of the decade.

It’s important for us to realize that the Council Fathers never envisioned, much less encouraged, a scenario in which the Church would in essence create a brand new “form” of the Roman Rite while leaving the Mass according to the 1962 Missal (now called the “Extraordinary Form”) unchanged. How and why this happened is a subject unto itself, but the salient point here is that the near “overnight” emergence of a “bi-formal” Roman Rite is as unusual as the unique set of circumstances it created!

The liturgical rites of the Church are recognized by their Apostolic roots, and they admit of change only organically through the course of the centuries. The Council Fathers underscored this important point by insisting, “There must be no [liturgical]innovations unless the good of the Church genuinely and certainly requires them; and care must be taken that any new forms adopted should in some way grow organically from forms already existing” (SC 23).

Well, needless to say, this is not what happened. In 1993, Cardinal Ratzinger felt compelled to write of the post-conciliar process of liturgical reform, “We abandoned the organic, living process of growth and development over centuries, and replaced it — as in a manufacturing process — with a fabrication… a banal on-the-spot product.”

These are harsh words to absorb indeed, but we mustn’t fear to meet our challenges head on with confidence in the Lord who redeems us. (On that note, take heart, as we are on the cusp of recovering much treasure in the new English translation of the Roman Missal!)

As Cardinal Ratzinger’s words suggest, never before has a liturgical rite, or even a given form of a liturgical rite of the Catholic Church, been simply “born” of a commission in just a matter of several years. Yet, this is exactly what transpired and the implications are considerable.

The peculiar set of circumstances in which we find ourselves today have created an environment in which Roman Rite Catholics are faced, either in practice or in theory, with two entirely valid liturgical “choices;” i.e. what form of the Roman Rite works best for me?

The majority of Catholics, who as the name suggests worship in the Ordinary Form, are further faced with yet another unprecedented set of potential liturgical choices as the Novus Ordo is given to multiple variations.

Do I prefer the Folk Mass or the “regular” Mass? Do I like Fr. Joe’s Mass or Fr. John’s Mass? Do I want to drive a few extra miles to go to the charismatic Mass, or should I take the kids to that parish across town with the video screens and the PowerPoint homilies?

Saving any commentary on the merits of these choices for another day, the very idea of shopping for a liturgy that suites one’s fancy is inherently flawed in that it approaches a divinely instituted gift that is given by Christ to His Church (not to the local community, much less to the individual) and it treats it as though it is a product of the people that can be repeatedly reinvented according to popular fashion as seems useful to the meet the demands of personal preference. It is, in other words, a liturgical approach that is inordinately “me-centered.”

This is an entirely new situation that came about only after the advent of the newer form of the Roman Rite, and keep in mind — we’re not just talking about an expression of personal piety here, like choosing the Rosary over the Chaplet of Divine Mercy; no, we’re talking about the central act of our Catholic faith; “the summit toward which all of the Church’s activity is directed and the font from which all of her power flows” (SC 10).

Alluding to the diminished sense of the liturgy’s “giveness” in today’s environment where a certain “freedom of liturgical choice” has become normative in the eyes of many, the Prefect of the Congregation for Divine Worship, Cardinal Antonio Cañizares de Llovera, said in a 2009 interview

“The liturgy always looks towards God, not the community; it is not the community that makes the liturgy, but it is God who makes it… The greatest evil that is being done to man is trying to eliminate from his life transcendence and the dimension of the mystery. The consequences we are experiencing today in all spheres of life; the tendency to replace the truth with opinion, confidence with unease, the end with the means… Never before has there been so much talk of freedom, and never before have there been more enslavements.”

With this being the case, is it any wonder there are Catholics in our day who operate as though their personal preferences legitimately reign supreme in such fundamental matters of faith as how one defines the sanctity of marriage?  Consider, if you will, the convoluted yet not entirely unpredictable logic that the current liturgical climate has invited.

Liturgical rites are by their very nature, according to Cardinal Ratzinger, “anchored in the time and place of the event of Divine revelation.” (The Spirit of the Liturgy

Our Catholic faith likewise professes that marriage is a gift that is divinely given. (The similarities do not end there, indeed they are many, but I trust the point is well made.)

If the Church’s desire for renewal at Vatican Council II opened the door for the former to be legitimately approached as an expression of personal preference, why not the latter? And so the logic goes.

Perhaps this is why so many on the Catholic Left who embrace personal choice when it comes to things like abortion and sexual morality are often moved to outright hostility at the mere suggestion that there is value in the traditional form of Holy Mass for anyone. Could it be that they realize there is much more at stake in the liturgy than what goes on within the walls of the church building? (Ironic, is it not, given the mantra of the Left, “Stay out of my bedroom?”)

The fundamental difficulty here is that when liturgy, in practice, becomes a venue in which believers are empowered to exercise choice as a function of personal preference the stage is set for a certain “idolatry of self” to play itself out.

Evidence of this danger is made manifest in any number of ways in the Ordinary Form; the orientation of the priest and the physical layout of our church buildings wherein the community of believers is turned inward upon itself, the narcissistic music that we often bring into the Mass, the ever increasing roles that we assign to the laity while granting them the title “minister,” etc.

Perhaps the most telling example, however, is witnessed when the celebration of Holy Mass takes on the appearance of a “social justice rally” in which the community enters into a trap that is similar to that which binds and hardens the hearts of many Reform Jews in our day, ceasing as many have to await a “personal messiah” while adopting instead the notion that they must look to themselves to “be messiah” in the world.

The social justice themed liturgy, in practice, can tend dangerously close to a quasi-religious form of secular humanism, and it is no mere coincidence that such causes as those that have come to define Reform Judaism as much as anything else — abortion on demand, gay “marriage,” and a glut of other leftist social agendas — have also found favor among the very same Catholics who resist any effort to “reform the reform” of Holy Mass today.

“Save the liturgy, save the world,” of course.