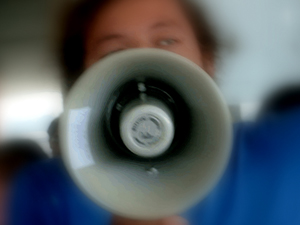 Free speech has always been one of our most cherished rights. It has come under attack repeatedly by those who find it to be an inconvenient and unwanted obstacle to the attainment of their political goals. Sometimes, those in positions of power ignore the First Amendment and issue laws and regulations to silence their opponents. Other times, politicians or citizens work on an unofficial level, resorting to influence or intimidation to achieve censorship.

President John Adams signed the Sedition Act to criminalize “false, scandalous, and malicious writing” against the government or its officials. Americans didn’t like the federal government censoring expression or presuming to determine truth, so they canned Adams in the next election.

Abraham Lincoln jailed newspapermen whose comments on the Civil War were not to his liking.

In 1935, Franklin Roosevelt signed the National Labor Relations Act, effectively curtailing employers’ freedom to talk with their own employees about their company’s financial condition and the affordability of wages and benefits.

Both Roosevelt and Richard Nixon imposed various wage and price controls. Since prices are the language through which present value is communicated between potential buyers and sellers, they essentially banned a form of free economic speech.

The assault on free speech seems to have accelerated in recent years. Freelance censors on the left have prevented dozens of conservatives from giving scheduled speeches on college campuses by shouts, chants, and even physical aggression.

A favorite tactic of global-warming propagandists has been to try to suppress dissenting views by urging reporters to ignore opposing viewpoints. Stephen Schneider, from his well-funded government perch at the National Center for Atmospheric Research, called it “journalistically irresponsible to present both sides” of the story. Al Gore used to tell journalists not to waste time interviewing global-warming skeptics.

Under the Patriot Act, the FBI is empowered to issue gag orders against those whom they investigate—even harmless little old ladies. (See Judge Andrew Napolitano’s YouTube clip.)

— The president’s FCC diversity officer, Mark Lloyd, has lamented that private media companies almost thwarted Hugo Chavez’s “incredible” revolution in Venezuela, and wants to impose punitive fees on radio stations that broadcast conservative talk shows, lest they interfere with the accomplishment of the Obama revolution.

— The president’s Secretary of Health and Human Services, Kathleen Sebelius, publicly warned health-insurance companies that there would be “zero tolerance” for statements that contradicted the official party line on Obamacare.

— In December, the Federal Communications Committee (on a party-line 3-2 vote) imposed “net neutrality”—an innocuous-sounding phrase that disguises the elementary fact that the government wants some control over the Internet, the kind of power that the Chinese government has. (Incidentally, Verizon has filed suit against this unconstitutional power grab.)

— In his book, Democracy and the Problem of Free Speech, President Obama’s head of the Office of Information and Regulatory Affairs, Cass Sunstein, asserted, “the First Amendment … is not so much a matter of protecting rights as ensuring sound public judgment through the process of public deliberation.” Sunstein believes that “people should be exposed to materials that they would not have chosen” and favors policies like federal guidelines for coverage of public issues and taxpayer-funded panels of “experts” to insure “diversity of views.” So much for the principle of letting Americans listen to what they want.

In November, Sen. Jay Rockefeller (D-WV) mused publicly about the FCC shutting down Fox News and MSNBC (not exactly an equal trade, since relatively conservative Fox has multiples of the viewers of relatively liberal MSNBC) so that Americans could “have some faith in their government.” Yep, don’t let the people hear about what our great leaders are doing in Washington!

More recently, some voices on the left have exploited the tragedy in Tucson to rail against free political speech. (Personal disclaimer: I can’t stand strident rhetoric and am on record in advocating self-restraint from hateful rhetoric.) The left shows a remarkable lack of confidence in the attractiveness of its agenda by resorting to attempts to suppress opposing points of view. Thomas Jefferson wrote, “It is error alone which needs the support of government. Truth can stand by itself.”

Rather than attempt to censor those with whom we disagree, let us welcome a vigorous debate. If you don’t like what you hear, turn it off, but don’t deny others the freedom to speak or hear various viewpoints. Jefferson again: If an opinion or argument “be false in its facts, disprove them; if false in its reasoning, refute it. But for God’s sake, let us freely hear both sides if we choose.” Amen.