Trending Now
You are at:Home»Columnists»Liturgy Should Say: ‘We’re not in Kansas Anymore’
By Louie Verrecchio on May 17, 2011 Columnists, Featured, Live in Christ 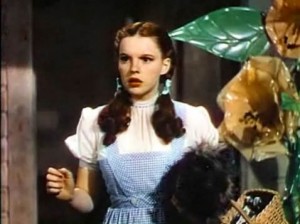 Last Wednesday night I had the pleasure of addressing a “Theology on Tap” gathering of young adults on the topic of how to prepare for the new English translation of the Roman Missal.

During the Q&A portion of our time together I was somewhat surprised when a number of attendees wondered aloud about how the forthcoming translation might strike their non-Catholic friends during a visit to Holy Mass. They were concerned, it became known, that the new translation might somehow prove less “inviting” than the current text.

How ironic, I thought, that this topic would come up just days after Catholic News Service ran a story under the headline, “New Mass translation is ecumenically harmful, Anglican says.” (For the record, the young Catholics in attendance last night had apparently not read, and therefore were not influenced by, the CNS story to which we will return momentarily.)

The good news is that I sensed, for the most part, an authentic desire not just to get along with their Christian friends, but rather to see those outside of the Catholic Church one day welcomed as Her visible members. It was also encouraging to recognize that they had very correctly identified Holy Mass – the centerpiece of our Catholic life – as the perfect venue (at least in theory) in which to introduce their friends to the unique presence and operations of Christ such as He dwells in the Catholic Church alone.

The bad news, however, is that their concern regarding the relative “welcomeness” of the new translation vis-à-vis non-Catholics is truly a symptom of a much larger problem — one that has been created in large measure by our blundered attempts to implement the liturgical reforms desired by the Fathers of Vatican Council II. The unfortunate fact of the matter is that Catholic identity as expressed through the perceptible signs used in the Ordinary Form of the Roman Rite has been so utterly decimated over the last four decades that it lies all but hidden from view in many places, and it will take far more than just the corrected Missal to restore it.

Intentionally or not, the aforementioned CNS story articulates very well the root of our Catholic identity crisis as it relates to the liturgical text. In it, Anglican Rev. David Holeton, a liturgist and professor at Charles University in Prague, states that other Christians were “both stunned and dismayed” when the Holy See decided to change the English texts of prayers that had been developed with their input in the years following the Council.

Also of concern to other Christians, according to Rev. Holeton, is that the Holy See has seen fit to discourage ecumenical consultation in the process of producing the new text, a point that he supported by quoting from “Liturgiam Authenticam” — the 2002 Instruction that was issued by the Congregation for Divine Worship to establish new guidelines for translating the sacred texts.

“Great caution is to be taken to avoid a wording or style that the Catholic faithful would confuse with the manner of speech of non-Catholic ecclesial communities or of other religions, so that such a factor will not cause them confusion or discomfort” (LA 40).

According to CNS, Rev. Holeton said that the use of common texts by dozens of Christian denominations around the world has created an environment in which English-speaking Christians, upon visiting one another’s liturgies, experienced “a sense of familiarity” and a feeling that “they were not with strangers but among friends.”

In Rev. Holeton’s view, “Both the sense of being ‘at home’ and of being ‘among friends’ are foundational paving stones on the way to Christian unity and it is the liturgy, more than anything else, that has nurtured this sense of communality.”

One can hardly fault Rev. Holeton for feeling as though the carpet is being pulled from beneath his feet thanks to the new translation, after all, he’s viewing the matter from the perspective of one who wants very much to believe that his ecclesial community is every bit as much the “church” founded by Christ as the Holy Roman Catholic Church. Of course, the very premise is wholly unsustainable in the light of truth, but he is quite correct in recognizing that the current English text of the Ordinary Form of the Roman Rite gives the impression that it is the Church’s desire post-Vatican II to lend a degree of credence to his heretical theology.

In the current climate of ecumaniacism and political correctness, many people seem to insist on the use of castrated language to the point where it is no longer considered acceptable to acknowledge heresy even where such is obvious and even when doing so is ultimately ordered toward the good of all concerned.

“Heresy” is a terrible thing, but it is not a dirty word, my friends; it is “the obstinate denial or doubt, after baptism, of a truth which must be believed by divine and catholic faith” (Code of Canon Law – 751), and it does neither Rev. Holeton nor those who embrace the theology he espouses any favors to pretend otherwise.

Speaking of political correctness, among the more provocative statements I felt compelled to make last night is that the Lord wills that every single human being be Catholic; that is, a fully incorporated visible member of the Catholic Church. Shocking? It shouldn’t be, but I’m afraid to many a Catholic ear it really is.

Our modern culture tends to indiscriminately celebrate diversity in whatever form it may come, but make no mistake about it – the fact that the Christian world is comprised of Catholics, Orthodox, Anglicans, Methodists, Baptists and on and on the list goes, is not a cause for rejoicing; it is the lamentable result of sin, and it most certainly isn’t the will of Him who founded but one Church and then fervently prayed for it to persevere in unity.

That’s a difficult truth for many to swallow nowadays, I know. I also know that it will be a jolt to the system of some to read that Rev. Holeton, though we can certainly be friends, is deceiving himself in feeling “at home” when visiting the liturgy of the Catholic Church even as he refuses to accept no small portion of Her most fundamental teachings, and he is equally as mistaken in entertaining the idea that anything more than just a mere shadow of the “communality” that Christ wills for His Church can ever exist between us until he does.

Perhaps the saddest fact of all is that Rev. Holeton, and countless others like him, have the Catholic Church, in part, to thank for enabling, to some extent, their errant ways of thinking. How? By means of a forty year old liturgy that has, through many of its outward signs (including English texts crafted to be held in common with Protestant communities), communicated rather loudly (albeit inadvertently, one can only hope) precisely the kinds of falsehoods they are determined to believe; among them, the belief that at the end of the day we really are just different expressions of the one Church of Christ.

And the Protestants aren’t the only ones who got the wrong message. How else can one explain the fact that so many wayward Catholics over the last four decades have sought greener liturgical pastures in the praise and worship services of the heretics? (Be honest, you still can’t seem to read that word without cringing, right? For their sake and yours, try to get over it.)

This also happens to be the reason why some of those passionate young adults to whom I spoke last night are apparently tending in thought toward the same false notion to which Rev. Holeton is clinging; namely, that the text of Holy Mass must function as a kind of welcome mat for non-Catholics upon whom we dare not impose even a modicum of culture shock.

Well, I say it’s high time for our non-Catholic visitors at Holy Mass to receive exactly what they deserve – a barrage of truly sacred signs that unmistakably communicate the message “You ain’t in Kansas anymore, Toto; you’ve arrived at Heaven on earth!”

Yes, the new English translation of the Roman Missal is a tremendously important step in that direction, but let’s not placate ourselves too quickly. This alone isn’t enough to set things right as all the sacred, Latinized, metaphorical language in the world can easily get swallowed up in a liturgy that rests far too heavily on the personality of a priest who is facing his congregation. It can be drowned out by music that is more apropos an episode of Glee than the Holy Sacrifice, and it can quickly be trampled upon by an army of laity who insist upon running around in robes calling themselves ministers.

We have a long way to go indeed, but as the inimitable Fr. Z likes to say, “brick by brick.”