Trending Now
You are at:Home»Featured»Looking for Clarity? Try St. Francis de Sales
By Kathleen Woodman on June 4, 2012 Featured, Live in Christ, On Books 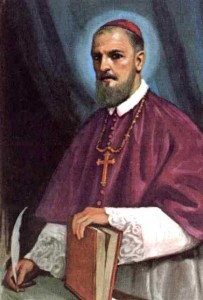 We are all called to holiness. Sometimes this can seem like an impossible call, especially when things get tough. And, at times the path to heaven can look like a fork in the road. What to do? If you read the lives of the saints, you’ll discover that they’re all so different that no one life lived in holiness is an exact replica of another. Holiness wonderfully transforms men and women with varied talents and gifts, who are as individual as you and I. Of course, certain fundamentals have to be present in every saint’s life, such as love and obedience to God’s will.

But alas, the search for God’s will in our lives is the stumbling block many of us mortals find ourselves tripping over. Not to worry. St. Francis de Sales, in his book called Finding God’s Will for You, throws a lifeline to the befuddled, clearing up foggy thinking with warmth and precision.

One fundamental truth he lays out is foundational for a life of holiness. Obedience to the teachings of the Church. Sorry, but he doesn’t let you skate by on that one. So, if there’s some area where you’re not accepting church teaching, you need look no further to find God’s will. Begin by living and applying the truths laid out in the Catechism of the Catholic Church. These teachings are known as God’s signified will. As he points out, “Christian doctrine clearly proposes to us the truths God wills us to believe, the goods He wills us to love, the commandments He wills us to fulfill, and the counsels He desires us to follow.”

Another matter he explains is that there are many everyday affairs that require no great deliberation process. Their value is too small to waste time pondering over. Too intensely scrutinizing over small things can even be a form of superstition, and the practical result can be many good deeds left undone. How does wasting time like this serve the Lord? In minor concerns, you don’t need a thundering voice from the clouds to personally assure you that you’re choosing well.

St. Francis also has a knack for putting stop signs in front of decisions that may present themselves to us as spiritually wise, but in truth are asking for trouble. He advises us to strive for growth in virtue, but within our abilities and station in life.

Our level-headed saint tells us a story about a young, virtuous, Portuguese man who was under the direction of St. Philip Neri. The young man was progressing well and growing spiritually, but he was convinced that he was being inspired to leave St. Philip Neri’s Oratory, and join the Order of St. Dominic. On the surface, it may not look like a decision that could cause much mischief. But St. Philip knew a thing or two about human nature, and the abilities and limitations of this particular young man under his care. Accordingly, he didn’t think that the Order of St. Dominic was the place for him to blossom spiritually. When the heedless young man entered the Order of St. Dominic in spite of the dangers, St. Philip, heartbroken, wept and declared, “I deplore the loss of so many virtues.” St. Philip’s tears flowed because he understood what could happen when prudence isn’t exercised in the spiritual life.

St. Francis de Sales goes on to finish the tale with a rather grim ending: “In fact, that young man who was so excellently prudent and devout in the congregation, after he entered the religious order became so inconstant and flighty that, agitated by various desires for novelty and change, he later caused great and grievous scandals.” I imagine that the desire for novelty and change is what may have gotten him into trouble in the first place. Perhaps he didn’t want to pursue holiness with the means that seemed merely ordinary to him, even though he was progressing well.

Being heavenly minded is important, but a good measure of no-nonsense sobriety will keep you on the road to heaven. St. Francis warns that if you’re on a good path, you should usually stick to it. Sometimes in leaving the good we already have in order pursue something better, we unwittingly sabotage ourselves. We leave behind something we could easily have accomplished, and never achieve the better, thus totally losing what we originally had. What a loss! We’ll have nothing but false starts toward holiness if we are constantly changing lanes, flitting from one thing that seems good, to another thing that seems better, to another thing that looks even better than the previous thing, to…nothing. We make countless beginnings, but never finish. What a devilish way to be spiritually wiped out.

Thankfully, with the timeless, practical wisdom of St. Francis de Sales, you can avoid becoming a hapless casualty of poor decisions that may seem very spiritual and beneficial, when in reality they’re just rabbit trails to nowhere. If you’re serious about living out God’s plan for your life, give this wonderful book a read, because it‘s written by a veritable master of the via media (the middle way). It’s a high-powered remedy for spiritual foolishness and burnout. As St. Francis said, “holiness is perfectly possible in every state and condition of secular life.”