Trending Now
You are at:Home»Featured»LUCY and the Longing of the Heart for More
By Bill Donaghy on March 19, 2015 Featured, On TV and Movies 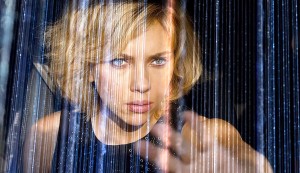 I was a young boy in the 1970’s and 80’s, coming of age in the early days of the movie magic of Steven Spielberg and George Lucas. of galaxies far, far away, of Close Encounters, and hidden mysteries, of Lost Arks and great adventures. I can honestly say my formation and invitation into wonder and transcendence was assisted, however imperfectly, by the films of my youth.

St. John Paul II once wrote in 1998 that movies are “the mirror of the human soul in its constant search for God, often unknowingly. With special effects and remarkable images, it can explore the human universe in depth. It is able to depict life and its mystery in images. And when it reaches the heights of poetry, unifying and harmonizing various art forms — from literature to scenic portrayal, to music and acting — it can become a source of inner wonder and profound meditation.”

I love movies! And I love St. John Paul II.

But let’s be honest, as much as a film can form, or even transform the viewer, so it can also deform. There are the obvious movies that are simply full of explosions or exploitations of the beauty of human sexuality (or both). These films cheapen the human person, leaving their darkened images to cloud our thoughts like gnats incessantly buzzing about, and those images aren’t easily brushed away.

There are also the more subtle scripts whose ideas not only carry an impure vision of the human person but a deeply twisted one. With that in mind, let’s look at the recent release of the Scarlett Johansson, Morgan Freeman movie LUCY.

I’m fascinated with the idea because the speculative theologian in me has always imagined that the “unused” 90% of our brains might be due to the Fall in Eden. We’ve been promised that the full potential of the human person will be unlocked for us in Heaven. Perhaps there we’ll enjoy the full spectrum of light and of sound, of the deep knowledge of the physical universe and of a thousand other gifts that God wanted preternatural man to have in imaging His own beauty?

After all, St. Irenaeus wrote “The glory of God is man fully alive.” LUCY, however, sees a far more impersonal eschaton. Prepare yourself for spoilers.

Against her will, Lucy becomes a “drug mule” who transports a highly unstable new drug that can unlock the brain’s potential. Through a series of painful encounters, the pouch within her is punctured and the drug released into her blood stream. Lucy then frees herself from her captors and begins a whirlwind ride as her “unused” brain matter is exponentially actualized, even as her captors are in hot pursuit of their “stolen” goods.

There are plenty of explosions, narrow escapes, speculative science jargon and even touching moments to make this film engaging. I was moved the most by Lucy’s phone call to her mother. Her brain power is climbing, 20%, 30%, 40%, as she sees her life and health (due to the drug) unraveling, she reveals a “knowledge” that no one before could possibly access, and it’s done so tenderly.

Mom? … I feel everything… The heat leaving my body. The blood in my veins… The pain in my mouth when I had braces. I… I can remember the feeling of your hand on my forehead when I ran a fever… I remember the taste of your milk in my mouth. The room, the liquid… I just want to tell you that I love you, mom, and dad… I want to thank you for the thousand kisses that I can still feel on my face. I love you, Mom.

This for me is a climactic moment in LUCY. It reveals a fullness of humanity in the dimension of relationship. This is ultimately why we are here: for communion! In his first encyclical, Lumen Fidei, Pope Francis writes that “the core of all being, the inmost secret of all reality, is the divine communion” (Lumen Fidei, 45). Human love here below is the gateway, the primer, the first steps we take to enter that communion!

But alas, the materialistic philosophy of the writers of LUCY stops short of such sublime communion. Instead, the more Lucy’s brain matter is actualized, the less human she becomes. Her communion is only with matter, not spirit, not the depth of other people or of the Divine, but only their DNA. She knows every atom, but she doesn’t know Adam.

Lucy becomes increasingly stoic, vapid, almost as expressionless as a computer screen. In the end, this is exactly what she becomes, a disembodied cloud of consciousness who can “access” everything and yet touch no one. As Lucy sees herself slipping away she kisses a police officer, telling him she does this so she “won’t forget.”

As a last ditch act of selfless heroism, we see Lucy wanting to give all of the “information” her brain has tapped into for the benefit of science. To take on this noble task, there is the ever popular Morgan Freeman playing the role of Professor Norman. The dehumanizing philosophy of the LUCY film than reveals itself in a dialogue between them:

Lucy: “I don’t feel pain. Fear. Desire. It’s like all things that make us human are fading away. It’s like the less human I feel… all this knowledge about everything; quantum physics, applied mathematics, the infinite capacity of a cell’s nucleus. They’re all exploding inside my brain, all this knowledge. I don’t know what to do with it.”

Professor Norman: “You know… if you think about the very nature of life. I mean, from the very beginning. The development of the first cell divided into two cells. This whole purpose of life has been to pass on what was learned. There is no higher purpose. So, if you’re asking me what to do with all this knowledge you’re accumulating, I’d say, pass it on. Just like any simple cell going through time.”

Love is that true evolution that is, as Chesterton wrote, a revolution. It allows us not to possess, but to be possessed. Pope Benedict once wrote that “Love is the very process of passing over, of transformation, of stepping outside the limitations of fallen humanity… into an infinite otherness.”

Our perennial lust for material knowledge can never satisfy the human longing for intimacy, the kind of knowledge that is in fact deeply spiritual. This contemporary craving for a disembodied life detached from the “limitations” of our earthly existence, is in reality a fear — a fear of love. Perhaps a fear of our own fragile humanity.

But what appears to be weakness or a limitation is in fact our greatest gift? Just think of the naked, crucified Christ, who is perfect love poured out for each of us! Films like LUCY and philosophies like that of the transhumanists posit the idea that we are deeply flawed in our bodies; that our “biological package” needs an upgrade.

The transhumanist website humanityplus.org envisions a world that affords us “the continuation and acceleration of the evolution of intelligent life beyond its currently human form and human limitations by means of science and technology…” (Max More 1990, www.humanityplus.org). But the path to true human flourishing and the full actualization of the human mind must never be at the expense of the heart, or of the integrity of the whole human person.

These ideas show us a twisted hunger for the kind of fuller knowledge that once shimmered in Eden, when the first man and woman could, “see each other even more fully and distinctly than through the sense of sight itself… they see and know each other with all the peace of the interior gaze” (St. John Paul II, TOB 13:1). This is the knowledge that leads to love, which is the “innate and fundamental vocation of every human being” (St. John Paul II, Familiars Consortio, 11).

May we who have been given the beautiful integrated vision of the human person in John Paul II’s Theology of the Body shine a light on this ache for true knowledge, and lead modern man and woman back home to themselves.

Lucy: “I want to thank you for the thousand kisses that I can still feel on my face. I love you, Mom.”

Lucy’s Mother: “I love you too, sweetie. More than anything in the world.”