Trending Now
You are at:Home»Featured»Lust, Love, and Demons: A Review of Tobit’s Dog
By Karee Santos on June 19, 2014 Featured, On Books 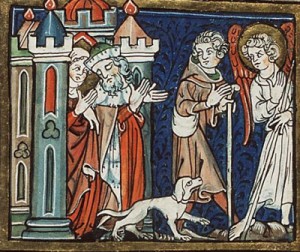 The Biblical story of Tobit’s marriage to Sarah, whose previous seven husbands had been slain by demons, has been cleverly reimagined in a new novel (released April 2014 by Ignatius Press) called Tobit’s Dog, by Michael N. Richard.

The novel is set in the backwoods of Depression-era North Carolina. The plight of blacks in the Jim Crow South parallels the plight of the 7th- and 8th-century Jews during the time of wars, deportations, and exile that formed the backdrop for the Biblical tale of Tobit.

A love story and a murder mystery, Tobit’s Dog combines elements of a young man’s journey into adulthood. Tobias must collect a debt due to his blind and poverty-stricken father, lift the cloud of scandal from his bride-to-be Sarah, and discover who killed Sarah’s former fiancés.

The novel’s plot closely follows the Bible story, with the character Ace Redbone (i.e., the Archangel Raphael) safely delivering Tobias, the son of Tobit, to meet his wife-to-be, his distant relative Sarah. Tobias and Ace together drive away the scourge that has been plaguing Sarah and her family. Tobias then returns to his parents to cure his father from blindness and to present Sarah to them as his bride.

Though mentioned in the title, Tobit’s dog Okra is not a central character, nor is the story told mainly from his viewpoint. Interestingly, Tobit’s dog does appear in the original Bible story. My 1899 Douay-Rheims translation notes:

The dog, &c. This may seem a very minute circumstance to be recorded in sacred history: but as we learn from our Saviour, there are … things that appear minute, but which have indeed a deep and mysterious meaning in them.

Tobit’s Dog attempts to tease out this deep and mysterious meaning. The character of Okra the dog is a protector, but above all a watcher. His name, the book explains, comes from an African word meaning soul. As the story progresses, the angelic character Ace Redbone praises Okra, saying “What a marvelous beast you are becoming.” The book projects the sense that a soul, like the character Okra, that is alert for supernatural signs and guarded against supernatural evil will eventually flourish.

The novel reaches its climax when Ace and Tobias face the demons of lust and greed that have been haunting Sarah and her family. The character representing lust has a friendly face and isn’t immediately recognizable. But the demon’s defeat comes when Ace confronts it directly with the words “Have you actually believed that I do not know you?” Sometimes the best way to defeat lust is to look it in the eyes and name it for what it is.

Lust is a central theme in the Old Testament Book of Tobit. Unlike in Richard’s modern retelling, the Biblical character Tobias defeats the demons himself by using the Archangel Raphael’s advice to take his wife to the marriage bed not in lust but in love. In a stirring speech, Tobias tells Sarah:

For we are the children of saints, and we must not be joined together like heathens that know not God. … Thou madest Adam of the slime of the earth, and gavest him Eve for a helper. And now, Lord, thou knowest, that not for fleshly lust do I take my sister to wife, but only for the love of posterity, in which thy name may be blessed for ever and ever (Tb 8:5, 8-9).

These ideas may seem old-fashioned in light of modern sensibilities, which tend to separate sex from procreation. People today like to pretend that making love has nothing to do with making babies. We see sexual pleasure as a great good, but babies as a burden and sometimes as a punishment. For the Jews of the Old Testament, however, children were always seen as a blessing.

The novel Tobit’s Dog reawakens the sense of family members as blessings to one another. Tobit’s deep spiritual wisdom and his faith throughout his blindness inspire those around him. Tobit’s wife Anna perseveres in her love and care for her disabled husband who is no longer able to work to support her. And Tobias brings back hope to Sarah’s entire family when he defends Sarah against the gossip and scandal that had nearly destroyed her. The characters of Tobit’s Dog are uplifting examples of every-day heroes who change their corner of the world for the better and show us how we can do the same.

Click here to order the book from Amazon and here to order it from Barnes & Noble. My thanks to Ignatius Press for providing me with a free review copy.