Trending Now
You are at:Home»Learn & Live the Faith»Apologetics»Luthers Today
By Guy McClung on June 7, 2015 Apologetics, Featured, History, The Homosexual Agenda 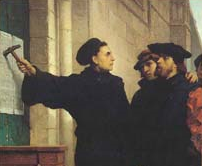 From Germany yet again today rises the aroma of dissent. Whether this will ripen into schism or outright heresy will be clear after the conclusion of this fall’s Synod on the Family. Some modern-day princes of the German Church and numerous German bishops are, as did Martin Luther some centuries ago, attempting to heretically alter Church teaching and to rewrite Holy Scripture.

They seek to change Jesus’s words to the woman caught in adultery: “Go now and sin on more.” They either excise or reinterpret passages like 1 Corinthians 6:9 (“Nor will men who lie with men . . . possess the kingdom of God”) so that voluntarily engaging in homosexual acts becomes virtue instead of sin.

German Cardinal Walter Brandmüller, a former head of the Vatican’s commission for historical sciences has spoken regarding German church leaders who support a change in doctrine that would admit divorced and civilly remarried Catholics to Holy Communion. He has called the leaders heretics and said that they put the unity of the Catholic Church at risk.

In an interview with LifeSite News, Brandmüller said that those who support such changes are “irresponsible” and “in contradiction to the teaching of the church.” He was responding to a proposal, put forward last year by fellow German Cardinal Walter Kasper, for remarried Catholic divorcees to receive Holy Communion after a period of penance. Brandmüller’s criticism is directed to fellow bishops and cardinals, including Cardinal Walter Kasper, Cardinal Reinhard Marx, and Bishop Franz-Josef Bode. Bishop Bode will be one of the German church’s representatives at the Synod this Fall.

Cardinal Marx has also been criticized by German Cardinal Gerhard Muller, prefect of the Vatican’s Congregation for the Doctrine of the Faith. Regarding the effort to make it appear that the German bishops’ conference has control over church doctrine in Germany, Cardinal Muller said:

This is an absolutely anti-Catholic idea that does not respect the catholicity of the Church. Episcopal conferences have authority over certain issues, but not a magisterium alongside the Magisterium, without the Pope and without communion with the bishops. . . . This kind of attitude risks in fact the reawakening of a certain polarisation between the local Churches and the Church universal, out of date since the Vatican I and Vatican II councils. The Church is not a sum of national churches, whose presidents would vote to elect their chief on the universal level. (Interview of Cardinal Muller in Famille Chrétienne, translation by Rorate Caeli).

Dissent and heresy are not without precedent in Germany. Martin Luther not only excised parts of Holy Scripture which were troublesome to his new religion, he also added to Scripture so that it would accord with his new theology. Luther, acting on a dubious enlightenment, took upon himself the role of determining the canon of Scripture and deleted the Epistle of James, the epistle which has the inspired words that gutted Luther’s attacks on the hierarchy and on the status of the centuries-old traditions of the Church, God’s inspired words that had to be erased since they directly contradicted Luther’s sola fide (faith alone) basis for overthrowing the Church’s authority:

What will it profit, my brethren, if a man says he has faith, but does not have works? Can the faith save him? . . . So faith too, unless it has works, is dead in itself . . . But dost thou want to know, O senseless man, that faith without works is useless? . . . You see that by works a man is justified, and not by faith only . . . For just as the body without the spirit is dead, so faith also without works is dead (James 2).

Luther also added the word alone (allein in German) to Romans 3:28 so that it would read: “For we reckon that a man is justified by faith alone . . . ”

And God bless Luther’s heart. At the very least he was not shy and did not attempt to pass off what he had done as some correct translation, an interpretation to recognize the “signs of the times,” or “sensus-fidelium” required re-interpretation of God’s Word. He simply and candidly said that this was the way he wanted it, that the German language required this for the sake of clarity, and this is what he needed scripture to say to buttress his new religion that should supplant that of the Roman Catholic Church:

If your papist makes much useless fuss about the word sola, allein, tell him at once: “Dr. Martin Luther will have it so” . . . Papist and donkey are one thing . . . For we do not want to be pupils and followers of the Papist, but their masters and judges. (Schaff, Philip, History of the Christian Church, Vol. VII, p. 362)

But Luther did not stop there. Mirroring St. Paul’s words in 2 Cor. 11, Luther went on in proclaiming himself as the authority on God’s word:

Luther had much to say about sinning, including the view that those who believe in God, those who have faith, are free to engage in adultery:

God only obliges you to believe and to confess (the faith). In all other things He leaves you free, lord and master to do whatever you will without any danger to your conscience, it makes no difference whether you leave your wife . . . What is it to Him if you do or do not do such things. (Luther’s Works, Weimar edition, XII, p. 131).

Those in Germany today proposing changes in Church doctrine are making an effort to camouflage the changes theologically and scripturally by saying that God’s mercy can and should embrace, as should the Church, the divorced and remarried and those in a loving homosexual relationship. This is a restatement of Luther’s heresy about mercy:

Be a sinner and sin strongly (Esto peccator et pecca fortiter), but believe and rejoice even more firmly in Christ, the conqueror of sin, of death, and of the world. During this life, we have to sin. It is sufficient that, by the mercy of God, we know that Lamb who takes away the sin of the world. Sin will not separate us for Him, even though we were to commit a thousand murders and a thousand aldulteries per day. (Luther, Briefe, Sendschreiben und Bedenken, DeWette editor, Berlin, 1825-1828)

Today’s German Princes of the one true Church provide much more than an echo of what Luther said and did. Their re-write of the Bible and their new doctrines are evident in their heretical declarations:

There is no need to further elaborate on the precise parallels between Luther’s program for rebellion and the schema of today’s rebellious German Princes of the Church. They repeat Lucifer’s, the light bearer’s, non serviam and they are truly modern day Luthers.

In the end, the Holy Spirit is with the Church until the end of time, and the gates of hell, German or otherwise, will not prevail against it.

[Author’s note: For a detailed discussion of the history of Luther, his heresies, and his re-write of the Bible, see Not By Faith Alone by Robert A. Sungenis.]