Trending Now
You are at:Home»Featured»Male Nurse Claims He Was Fired for Treating Muslim Women
By David J. Rusin on December 12, 2011 Featured, Law & Justice 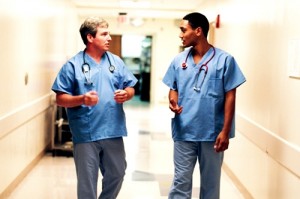 In one of the more intriguing cases to emerge recently, male nurse John Benitez Jr. filed suit against the city of Dearborn, Michigan, for sex discrimination last [month], charging that he had been terminated for tending to Muslim women at a government-run medical facility after receiving contradictory instructions about the need to adhere to gender separation:

Benitez, 63, of Madison Heights, worked at the city’s taxpayer-funded health clinic. He alleges he was ordered by a female supervisor not to treat conservative Muslim women, specifically those wearing head scarves, according to the lawsuit. He was told the clinic’s male Muslim clientele did not want a male treating female patients.

He complied until November 2010, when a doctor ordered him to treat Muslim women as he would any other patient. Benitez followed the doctor’s order and was fired less than one month later, according to the lawsuit.

An Associated Press item clarifies that his former female supervisor is Muslim and “told Benitez to refer patients wearing hijab to her, rather than treating them himself.” The U.S. Equal Employment Opportunity Commission gave the suit a green light in October.

Alarming on their own, the allegations also reinforce a pair of trends tracked by Islamist Watch:

A court will need to weigh the veracity of specific claims made by Benitez against Dearborn, but his attorney’s remarks are relevant well beyond the parameters of this one suit: “When you get to the point that taxpayer-funded entities are having to comply with personal religious beliefs rather than letting people do their job, you’re going down a road that does not end in a good place.”