Trending Now
You are at:Home»Featured»Manners and Morals in America as Seen from Equatorial Africa
By Robert Struble, Jr. on September 29, 2011 Featured, MyChurchParish.com, Vocations 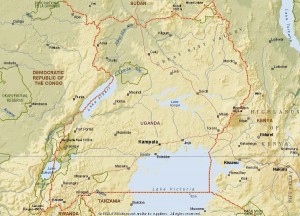 In the tradition of Frenchman Alexis de Tocqueville’s Democracy in America, cross-cultural comparisons can sometimes provide insights to which we, as citizens, might be blind.  A recent visitor to our parish in metropolitan Seattle, Father Kiiza Justus of Uganda, granted me an interview.[i]
.
Uganda — “the pearl of Africa” — has the youngest population in the world; half the 34 million Ugandans are below 15 years of age.  Many speak some English, and Fr. Justus (age 43) is fluent.
.
He was born in Kabale, Uganda, about 90 miles south of the Equator and 120 miles west of Lake Victoria.  Currently Fr. Justus is stationed in the chancery for the Kabale diocese as its financial administrator.[ii]  Based on his three years in a college in Oregon, and subsequent visits to Nebraska and the Pacific Northwest, I asked him to compare and contrast our own society with his in eastern Africa. 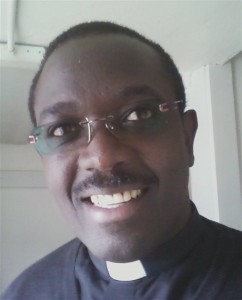 Life is “easier” in the USA, according to Fr. Justus in terms of technology, mobility and material comforts.   But popular culture is, says he, generally “healthier and kinder” in Uganda.  He notices a lot more homelessness in America than he ever sees in his hometown of Kabale.  How, I asked, can poverty be worse here than in a third world country?  He attributes it, in part, to our being unsupportive on a personal level to the impoverished.

While we may contribute money to St. Vincent de Paul and other institutional charities, Americans can be uncaring and cold to particular people who are poor.  I remember going to a sporting event in Seattle and witnessing a case of unprovoked verbal abuse directed at a panhandler outside the stadium.  The profane vitriol was meted out by a young man wearing –- sorry to say -– the jersey of St. Robert Bellarmine High School.

Nonetheless, Father Justus enjoys his time in the United States.  He has received an enthusiastic welcome in our parish.  On the day of his departure, it was like a receiving line in the vestibule after the weekday mass.  People waited to shake his hand, give him goodbye gifts, and urge him to visit again.

I think Father Justus is glad to come here on visits, but simultaneously he must be aggravated if not horrified.  He told me that during his initial stay in the United States, he found it “very difficult to come to terms with American culture.”

Comparing a third world country with an “advanced” nation like the USA is a little like comparing present-day America with her condition many decades ago, in that ours was once a predominantly farm-based society.  Similarly in Uganda today, more than 80 percent of the work force is employed on farms.  Also in the days of America’s Founding Fathers, the USA boasted a Judeo-Christian society, governed in a loose sense by Gospel values.  The same can also be said of Ugandan culture today, quite in contrast to postmodern America where hedonism, consumerism, and practical atheism hold sway.

The burgeoning neo-paganism in the West, as observed by Fr. Justus in the United States, is very different from Ugandan paganism, which is aboriginal in origin and constitutes a small segment of the population (3%).  Father Justus attributes the relatively solid morals in Uganda to both the missionary efforts during the colonial period, and the fact that the pre-Christian society had some conservative moral values -– insisting, for example, on a woman’s celibacy prior to her marriage.

Because even polytheistic traditions in Uganda acknowledged one Supreme Being, the creator (Ruhanga), Father Justus is reminded of the “unknown god” about whom St. Paul preached in Athens (Acts 17:23).  By contrast the postmodern paganism seen in the United States exercises an impious influence.  It assails the country’s moral and religious heritage with a potency and militancy that wins battle after battle.

As regards ecumenism, however, the ecclesial communities of Uganda are worse off than in the United States.  Two thirds of the population is divided about equally between Catholic and Protestants (mainly Anglicans).  But Anglican/Catholic relations are more characterized by enmity than harmony.  The two denominations have such a frosty relationship that, according to Fr. Justus, the Catholic hierarchy works more cooperatively with Muslims and pagans than with Anglicans.

In terms of cultural conflict, Uganda’s situation is quite different from the culture-war in the United States.  Ours is mainly between believers located in various Christian denominations opposing practical atheists in places of power and influence.  According to Fr. Justus there is no equivalent kulturkampf in Uganda, nor any church-state rift comparable to America’s.

The media in Uganda, while somewhat prone to secularism, operates under checks from public opinion and from the government.  Immodest dress, pornography, etc. are regulated by the national government’s Ministry of Ethics and Integrity.  In the spirit of church-state cooperation, public school curriculums are decided mainly by the Catholic and Anglican Churches in collaboration with the government’s Minister of Education.  The department head will sit down with Protestant and/or Catholic leaders to work out what is (and what is not) taught to public school pupils.  In the United States no such agreements could occur; they would be shut down by the Federal courts as contrary to prevailing church-state doctrine.

On the life issues, the Ugandan government continues to stand firm in resisting purse-strings type pressure from the US and the EU to liberalize Ugandan abortion laws.  Despite the outside pressure, abortion remains illegal throughout the country, except to save the life of the mother.

I’m reminded of Blessed Mother Teresa’s UN address of September 1994, when she said that the holocaust against unborn babies “brings a people to be spiritually poor, and that is the worst poverty and the most difficult to overcome.”  Whereas, “those who are materially poor can be very wonderful people.”

Her celebrated ability to see beauty in impoverished people relates to Ugandan society in various ways.  In terms of social interaction, for example, poverty exhibits redeeming features.  In Kabale, television is a luxury only available through satellite dishes to the few who can afford it.  But it has become accessible to the masses in public halls, where admission is charged; so that crowds congregate to watch televised showing of soccer matches.  And so instead of the Western tendency for television to isolate people and suppress personal communication (see the 1990 film Avalon); in poor countries television becomes a focal point for public gatherings.

On the homosexual question in Uganda, an historical sensitivity derives from 1885-1887, and the persecution of the Ugandan Martyrs.  Among the victims of the king, Mwanga II, were court pages -including Christian boys as young as 13 -– murdered for refusing the tyrant’s homosexual advances.  On June 3rd of each year, Catholics throughout the world mark the feast of Uganda’s martyrs, “Sts. Charles Lwanga and Companions.”

For many generations before Mwanga’s reign, and prior to the arrival of Christian missionaries, homosexual practices were abhorred among the pagans.  Where such activities did occur, they were kept secret, and to this day there is no significant movement to “come out” and declare one’s divergent sexual orientation.  In Ugandan cities, however, a “gay liberation” movement is now in its nascency.

Recent anti-sodomy legislation proposed by Hon. David Bahati, a member of parliament who resides in Fr. Justus’ diocese, elicited explicit threats from the West to withdraw Uganda’s foreign aid.  Moreover Bahati was denied a visa to travel to the EU or to the United States to explain his position.  His offense to Western sensibilities was in proposing to amend existing law so that it applied to homosexuals specifically.  The law already punishes sexual abuse of children generally; the penalty ranges from 20 years in prison to death.

In the Western media, Bahati’s bill got a lot of adverse coverage alleging homophobic persecution.  Due, therefore, to the political pressure from overseas, Bahati’s amendment was dropped.

Via what might be termed social osmosis, Western values are infiltrating Ugandan culture.  Youth culture type “music” from the West is on the increase -– “it’s everywhere,” says Fr. Justus.  In addition, college educated Ugandans have a greater tendency to be influenced by Western values, since often they go abroad to study – especially for advanced degrees – mostly in Europe, but increasingly in the USA.  When they return home, they bring along their exposure to the host country’s values.  Alexander Pope put the problem into verse:

Vice is a monster of so frightful mien,
As to be hated needs but to be seen.
But seen too oft, familiar with her face,
We first endure, then pity, then embrace. [iii]

Also, many Ugandans find jobs in Europe.  Sadly their joyful homecomings with Euros in their pockets can be like a leak in the dike, whereby the reeking tide of decadence enters into the community.

One of the starkest contrasts encountered by Fr. Justus was the dichotomy between the communal society in which he was raised, and the individualism that characterizes America.  In Ugandan society, life is centered more on the community; and sin brings collective shame on everyone.  Therefore righteous indignation continues to enforce morals in Uganda, unlike the United States where anything (except smoking) goes.

Father Justus is struck by how American society is so compartmentalized, busy, and “not very friendly” to strangers.  This, he points out, is a social environment more conducive to terrorism and common crime.  It is so much easier for villains to hide when the tendency to ignore your neighbor is a widespread social norm.  I’m reminded of my apartment as a young man in downtown Boston where the neighbor next door spoke to me once or twice in four years.

In Uganda, by contrast, village elders must be told about any outsiders visiting one’s household.  Otherwise someone will come and question the person closely.  Consequently, the mystery and suspicion associated with strangers is not so omnipresent in Ugandan society.  Nor is crime hyped up every day by the media.

In Kabale, men or women can walk the streets alone at midnight without fear of being assaulted.  Perfect strangers talk nonchalantly to each other as a matter of course.

In the USA, Father Justus does find that “once Americans know and trust you, they become very friendly.”  Until then he has “found it very difficult” that strangers are so guarded and reluctant to speak to each other.  He has learned to approach nobody on the street unless he knows them.

The high profile of child abuse cases also casts a pall over socializing between adults and young children.  It is especially disconcerting in America, says Fr. Justus, that “you don’t know how to deal with children.”  You have to be extra cautious with kids, lest a paranoid observer suspect you of being a predator.

In conclusion, Uganda today personifies the principle that material poverty and moral prosperity can exist side by side, just as economic affluence in the West may conjoin with spiritual destitution.  Poverty of soul manifests itself in many maladies — including isolation, materialism, hedonism and lukewarm religiosity.

With the accumulation of such traits, the great challenge is to disown our wealth in capital sins, lest the nation grow still more “darkly wise and rudely great.”[iv] With treasure in virtue, rather than richness in vice, let America inspire Africa once again — and the world.

[i]  Interview on Sept. 17-18, 2011 at Our Lady Star of the Sea Parish, Bremerton WA
[ii] For two years after minor seminary (high school), Fr. Justus did road construction and worked on the family farm near Kabale.  He was accepted into the seminary in 1990 and ordained a priest in 1999.
His first six years of ministry were in parishes of the diocese of Kabale.  Then his bishop, Callistus Rubaramira, sent him to the United States during the years 2005-2008, to earn his MBA (Masters of Business Administration) at the University of Portland, a Congregation of the Holy Cross college in Oregon.
[iii]Alexander Pope, An Essay on Man, Epistle II, 217-220.
[iv] Ibid., Epistle II, 4.